In our article, we will focus on the armored catfish – the Sterb corridor, not as well known as its closest relative, the speckled corridor, but the popularity of this species is growing every year, primarily because of its striking body color. For the rest, the catfish is unpretentious in keeping and feeding, and if desired, it will be easy to get offspring from it.

Corridors Sterba (Corydoras shterbai) is a freshwater ray-finned fish from the Armor (Callikhtovye) catfish family. The species was scientifically described not so long ago, just over 50 years ago. The fish is named in honor of a professor at the University of Leipzig, a member of the Royal Swedish Academy of Sciences, Gunther Sterba, a famous ichthyologist, author of popular books on aquaristics.

The Šterba corridor attracts aquarists with its beautiful coloration, which includes many light spots on a brown background. Like other members of the genus, fish prefer to live in schools. Peaceful catfish are perfectly compatible with most calm tropical fish. It is a pleasure to watch the flock of active and playful corridors of Shterb. The fish has a body shape typical of corridors. It is short, the abdomen is rounded, and the back, on the contrary, is convex. Closer to the caudal fin, the body tapers. On the sides of the body, there are rows of bone plates that form a real shell.

The mouth at the Shterb corridor is adapted for eating food from the bottom of the aquarium. There are three pairs of antennae located near the mouth opening, which perform several functions: they help to dig in the ground and serve as an organ of touch.

The fish is not large in size. The maximum body length is 6.5 cm. The Shterb corridors have their origins in South America. They can be found in Brazil and Bolivia, primarily in the basins of the Rio Guaporé and Mato Grosso rivers.

Fish prefer to live in rivers and streams with weak currents. They can also be found in lakes, ponds, small swamps, and backwaters. Often in such places at the bottom, there is a deficiency of oxygen, which led to the formation of intestinal respiration near the corridors.

It is best to keep the Shterb corridors in flocks of 5-7 individuals. For such a number of fish, you will need an aquarium with a volume of 60 liters or more. Since catfish lead a bottom life, the bottom area plays an important role. The bigger it is, the better. It is important that the fish always have access to the surface of the water so that they can take a breath of air if necessary.

Particular attention must be paid to the soil. Shterb’s corridors spend most of their time in search of food, digging at the bottom. Therefore, it is necessary to use a substrate without sharp edges, against which the fish cannot damage their sensitive antennae. Quartz sand, small rounded pebbles, special lightweight baked clay soils (Tetra ActiveSubstrate) are perfect. 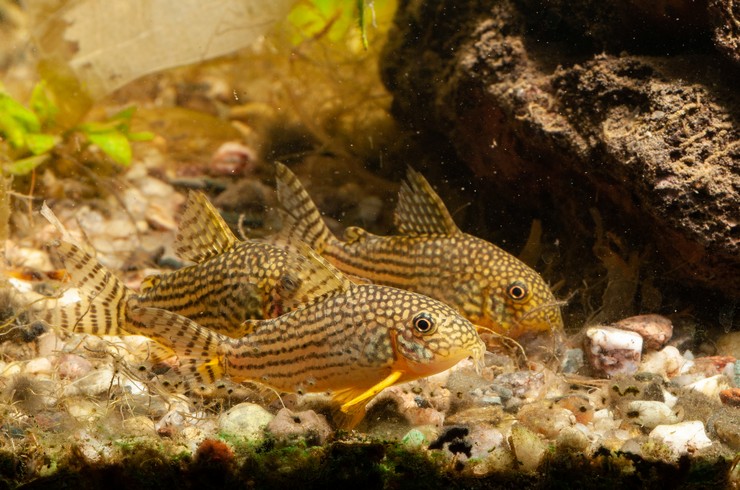 It is advisable to use natural stones and driftwood in the design of the aquarium. It is also necessary to create a large number of shelters: you can use coconut halves, ceramic pots, decorative grottoes. Be sure to add dense vegetation to the aquarium. For this purpose, the following are perfect: Vallisneria, Indian fern, hygrophila cinema, cryptocorynes, anubias.

For the comfortable existence of the Shterb corridors, you will need a filter and a compressor of suitable power. A 20% water change is required weekly. Fish are sensitive to salt and copper in the water. Lighting should be diffused, this can be achieved with floating plants. It will not be difficult to find neighbors in a common aquarium with Sterb’s corridors. Like all corridors, these catfish are distinguished by their peacefulness and calm disposition. The best neighbors are small carp, harassing (neons, tetras), labyrinths (gourami, cockerels, lalius), iris, dwarf cichlids. The corridors get along well with other peaceful catfish, both from their own kind and from others. True, it should be borne in mind that the corridors can eat the eggs of other fish and fry.

It is not recommended to add Shterba corridors to large or territorial fish, for example, cichlids.

Shterb’s corridors are unassuming in food and gladly eat the remains of other fish that fall to the bottom. Fish prefer to eat near the bottom, although they are able to float to the surface behind a tasty morsel. It is better to refuse the use of live and frozen food, they will not provide the catfish with a full range of nutrients, and in the worst case, they can also introduce an infection into the aquarium.

The best food for the Sterb corridors will be special sinking tablets for catfish. They quickly sink to the bottom and retain their shape for a long time. These tablets are especially relevant for general aquariums. After all, more active neighbors can eat the feed so quickly that the corridors simply will not get anything. Tetra has developed Tetra Cory ShrimpWafers in the form of thin sinking plates especially for all types of corridors. It is rich in essential omega-3 fatty acids, which promote healthy growth, and thanks to its special consistency, the plates do not pollute the water.

It is best to feed your fish after turning off the lights in the aquarium.