There can be a number of reasons why dogs are constantly licking their paws. Every dog licks its paws once in a while, but it can also become a serious health problem.

Contents hide
1 Why Do Dogs Lick Their Paws?
2 Licking Paws Out of Boredom and for Feelings of Happiness
3 The Dog is Constantly Licking Paws: Are Parasites to Blame?
4 Fungi as a Cause of Paw Licking
5 Dog Licks Its Paws: a Foreign Body Can Be to Blame
6 Paw Licking Out of Stress

Why Do Dogs Lick Their Paws?

If the dog’s paw itches, the four-legged friend tries to alleviate the uncomfortable feeling by nibbling or licking it off. The saliva cools the skin and relieves itching. However, from a certain point onwards, constant licking destroys the skin barrier, which leads to constant, severe itching in the dog and inflammation. Fungi and bacteria now have an easy time of it. They can easily penetrate the wounds without any problems and make them worse. As a result, the dogs usually lick and nibble even more and the wound cannot heal.

The reasons why dogs gnaw or lick their paws are very different. In some cases, several factors play a role.

In order to clarify exactly why the dog does not leave his paws alone, a veterinarian should definitely be consulted.

Licking Paws Out of Boredom and for Feelings of Happiness 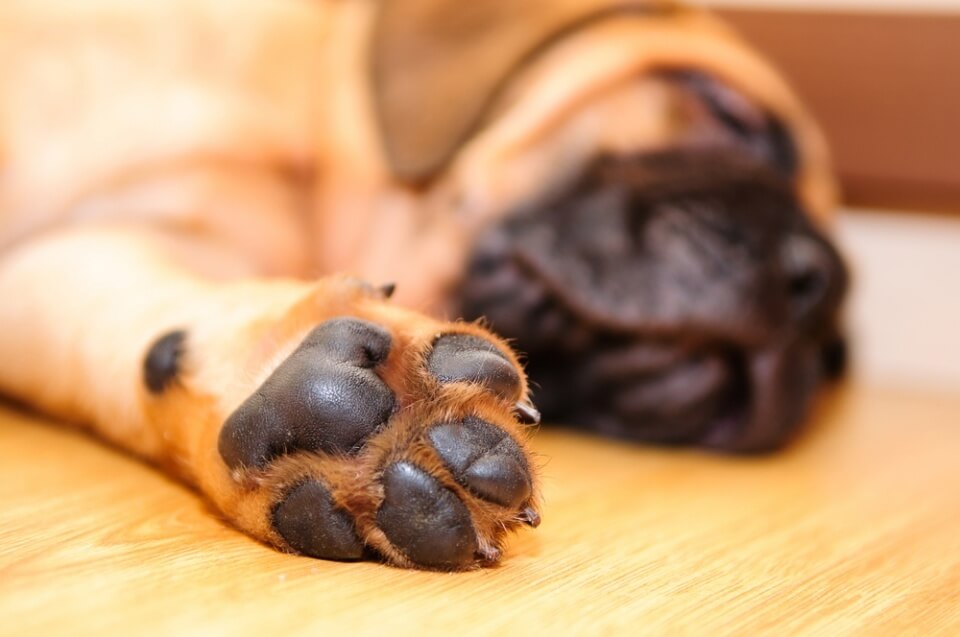 When the dog licks, endorphins are released. The positive messenger substances give a feeling of happiness when licking, even if there is no itching at all. The dog will maintain excessive licking behavior even if the skin disease has been treated for a long time. Many dogs also lick their paws out of boredom.

The Dog is Constantly Licking Paws: Are Parasites to Blame?

Autumn grass mites can be very annoying for dogs. The parasites are up to mischief between July and October. Dogs have nothing to fear from the fully grown autumn grass mites. The larvae, however, suck on the paws and leave behind a saliva secretion, which leads to itching in the dog, which can sometimes be very massive. They can be easily detected with a microscopic examination. The vet will use an anti-parasitic drug for treatment.

Fungi as a Cause of Paw Licking

Yeasts are not an issue for healthy dogs. However, if the skin flora has a serious disorder, the fungus spreads rapidly and causes severe itching. Especially in dogs with pronounced wrinkles, such as the Shar-Pei, these should be checked regularly, as they favor yeast fungi.

The fungus settles especially between the toes and on the ears. With a simple piece of tape (scotch tape), the vet takes a skin cell sample from the dog’s paw and puts dye on it. In most cases, treatment with a special medicated shampoo is sufficient. If fungus and itching appear several times, the trigger should be looked for. This could be an allergy. Yeasts are not contagious to humans or other animals.

If circular hair loss is visible, which is often accompanied by annoying itching, it is usually a skin fungus. The vet creates a culture here to be able to say for sure which fungus it is. Skin fungi are most contagious, both to humans and to other animals. The investigation should be extended to other residents of the household. That goes for humans and pets. Special ointments and shampoos are well suited for treating skin fungus.

Dog Licks Its Paws: a Foreign Body Can Be to Blame

If the dog only licks one paw, it may have kicked a small foreign body. For example, it could be a corn awn. Likewise, a thorn can be guilty. In the worst case, this can lead to encapsulation in the tissue. If pulling ointment or tweezers is not enough to get rid of the foreign body, it may need to be surgically removed by the veterinarian. In dogs with long coats, the hair itself can be the problem. Regular grooming and paw control should be a matter of course, as well as shortening fur that is too long. It is important to avoid matting on the paws.

Paw Licking Out of Stress

If the paw licking has no physical cause, the psyche may well be responsible. Particularly sensitive dogs or four-legged friends that are nervous and slightly stressed start nibbling and licking their paws in stressful situations. This is comparable to chewing nails in humans. Targeted training and, if necessary, behavioral therapy measures help to counteract this.

Paw licking can have many causes, but it is treatable. It is important that humans pay attention to whether the dog only licks its paws briefly or whether it does it with perseverance and often. Then everyone should be intervened.