Anyone hearing the veterinarian’s diagnosis of “pyoderma in dogs” should be patient: the treatment of bacterial skin infections can take a few weeks. As a rule, there are other diseases behind the “hot spots” caused by pyoderma, which must be treated in parallel. Read tips about pyoderma in dogs here.

What is Pyoderma in Dogs?

Pyoderma is a purulent inflammation of the dog’s skin, also known as “hot spots”. Because several strong skin symptoms come together in a short time on affected areas of the skin. It is caused by bacteria, mostly staphylococci.

Experts differentiate between superficial and deep pyoderma. Superficial means that only the epidermis, the top layer of skin, is affected. The hair roots can also become inflamed here or pus (impetigo) can develop.

If the four-legged friend scratches itself badly, the pyoderma can penetrate into deeper layers of the skin. There it can lead to the destruction of the hair roots and deeper inflammation.

Pyoderma does not occur alone but is caused by another disease. For example, an allergy can weaken the skin so that harmful bacteria can easily colonize. Dog pyoderma is not contagious – neither to humans nor to other animals.

Symptoms of Pyoderma in the Dog 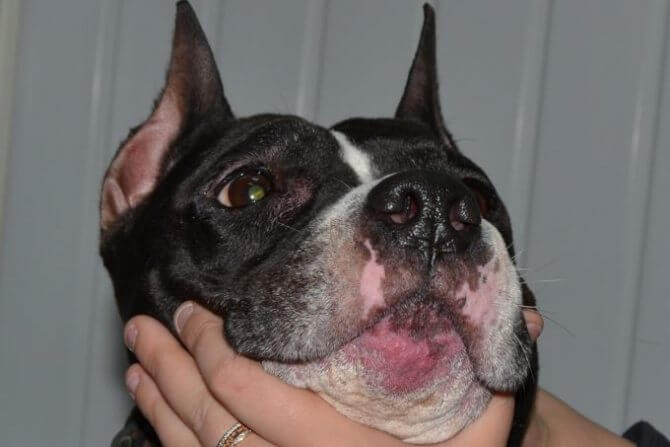 Since the symptoms occur together with other (skin) diseases, it is difficult to assign the symptoms. Symptoms of pyoderma include:

Symptoms can develop at a rapid pace. In the course of pyoderma, weeping wounds can develop that attract flies. Owners of long-haired dogs, in particular, should therefore inspect their dog’s skin on a daily basis.

Diagnosis at the Veterinarian

Anyone who notices the symptoms described above in their dog should make an appointment with the vet. Dog skin diseases have many faces. Each needs coordinated therapy.

In particular, itching and pain at the hot spots can be excruciating for many dogs and impair their quality of life. For the veterinarian, pyoderma can be a challenge as it occurs along with other medical conditions. The question comes up:

Which symptom belongs to which disease?

The expert will shorten or shear the fur. This facilitates diagnosis as well as therapy. Skin biopsies and microbiological examinations are suitable for detecting bacterial infestation.

In young dogs up to 12 months of age whose genital area is affected, experts speak of “puppy pyoderma”. These are often superficial pus lichen, which is associated with a good prognosis.

Therapy for Pyoderma in Dogs

To treat pyoderma, many vets recommend extensive shearing of the dog. If the dog is in pain from the inflamed skin, the clipping must be done under anesthesia. This allows better hygiene to get the bacterial infection under control.

The four-legged friend is to be prevented from scratching and licking the affected skin – for example with a neck collar. Special antibacterial shampoos or sprays and ointments are used. Antibiotics are required for deeper pyoderma.

Antibiotics are often given for several weeks in pyoderma. Even after the symptoms have improved, therapy may be necessary to prevent relapse.

If the four-legged friends suffer from pain due to the inflammation of the skin, pain medication from the veterinarian is required. After consulting the vet, dabbing the skin with chamomile several times a day can also help.

Pyoderma never occurs alone, which means the owner and veterinarian must treat the bacterial infection as well as the underlying primary disease. Possible causes of pyoderma are:

Sometimes genetic dispositions play a role. An above-average number of young Golden Retriever dogs are prone to pyoderma. Other breeds that are more prone to hot spots include German Shepherds, Labradors, St. Bernard dogs, and long-haired dogs such as Bobtails and Collies.

If you take good care of your dog and react quickly when skin problems occur, you can prevent hot spots. Protect the dog’s skin, for example, from a warm, humid climate, which is an ideal breeding ground for bacterial infections.

Especially with long-haired dogs, make sure they are groomed well to prevent matting. If the dog bathes in summer, dry it off afterward.

A strong immune system protects against skin diseases. You can promote this with a species-appropriate diet, sufficient exercise, and as little stress as possible.

Anyone who checks the skin of their four-legged friend for abnormalities on a daily basis can identify possible hot-spot triggers such as allergies or skin fungi more quickly. If these are dealt with quickly, you will avoid hot spots.