In our case, under a gesture, we mean some movement of the human body or part of it, which has the meaning of a command to perform an action by the dog.

Commands by gestures, as you understand, are possible in those situations when the trainer is in the dog’s field of vision. This usually happens in trials and competitions for some training courses, sometimes in demonstrations with dogs. Gestures are very widely used in dancing with dogs. Gesture commands can be used to control a deaf dog, provided that an electronic collar is used, the signal of which means to look in the direction of the trainer. In everyday life, the command by gestures also presupposes the presence of a signal that draws the dog’s attention to the owner. 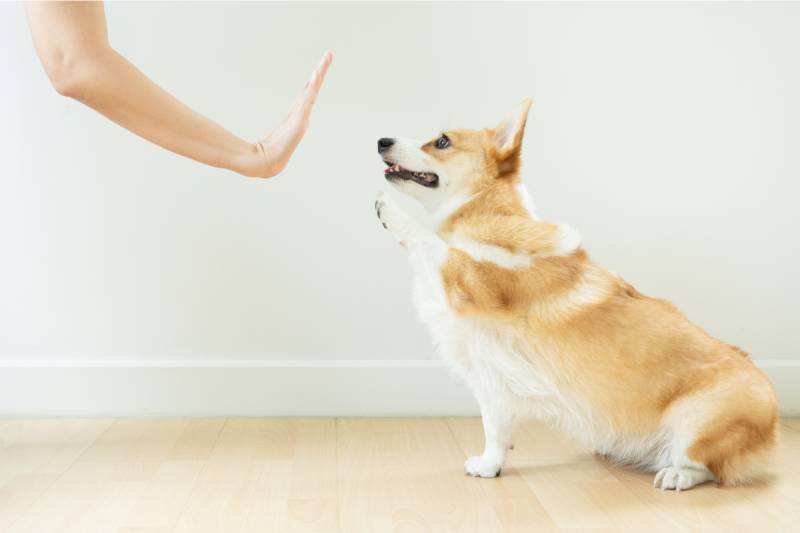 As for dogs, it is not difficult for them to understand the meaning of human gestures since they actively use a variety of pantomimic signals to communicate with their own kind.

Teaching your dog to respond to gestures is easy. To do this, you can, while training a puppy or a young dog, give a command with your voice, accompanying it with the appropriate gesture. This is the meaning of the training method, which is called the aiming or targeting method. It is often described as follows: Hold a piece of a dog treat or play object in your right hand (both treat and play are called a target). Give the dog the command “Sit!” Bring the target to the dog’s nose and move it upward from the nose and slightly backward – so that, after reaching for the target, the dog sits down. After several sessions, the number of which is determined by the characteristics of the dog, the target is not used, and gestures are made with an “empty” hand. In the second case, the dog is first taught to do what is required by voice command, and when the dog learns the sound command, a gesture is added to it. And after several sessions of the simultaneous use of voice and gesture commands, they begin to give the dog commands separately by voice and separately by gesture, getting it to perform the required action in both cases. 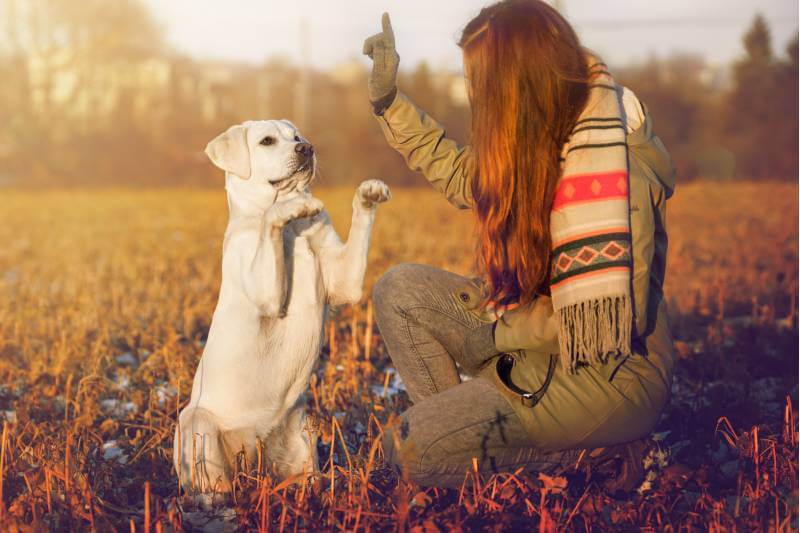 In the General Course of Training, gestures are used when giving the dog a free state, for beckoning, for landing, standing, and laying in the case when the trainer is at a distance from the dog when duplicating commands for retrieving the object, sending the dog to the place and for overcoming gymnastic apparatus.

When giving the dog a free state, which means walking the dog without a leash, the hand gesture not only duplicates the command with a voice but also indicates the direction of the desired movement of the dog.

We act like this. The dog is in the starting position, that is, it sits on your left. You unfasten the leash, give the dog the command “Take a walk!” and raise your right-hand palm down to shoulder height, in the direction of the desired movement of the dog, and then lower it to the thigh of the right leg. To begin with, the trainer should himself run a few meters in the indicated direction in order to explain to the dog what is required of it.

To teach the dog to approach the trainer by gesture, in case of its free state, first, call the dog’s name and at the moment when the dog looks at the trainer, give the command by gesture: the right hand, palm down, is raised to the side to shoulder level and quickly lowered to the right thigh legs.

If the dog has already been trained to approach by voice command, then after attracting attention, they first show a gesture and then give the command by voice. If the dog has not yet been trained to approach, it is walked on a long leash (a cord, thin rope, etc.). After attracting the attention of the dog with the nickname, they give a gesture and with light twitching of the leash initiate the dog’s approach. At the same time, you can run away from the dog or show it any target that is attractive to it.

The gesture for sitting is given as follows: the straight right hand rises to the right side to shoulder level with the palm down, then bends at the elbow at a right angle with the palm forward. Usually, the landing gesture is introduced after the dog agrees to sit down on voice command.

There are at least two ways to train your dog to sit by a gesture. In the first case, fix the dog in a standing or lying position and stand in front of it at arm’s length. Take the target in your right hand and move your hand from the bottom up to guide the dog to the landing. When making a gesture, say the command. Of course, this gesture is not very correct, but it’s not scary. Now we form the dog’s concept of the informational content of the gesture.

When your dog can easily follow the required 2 commands, stop using the voice command. In the next step, remove the target by controlling the dog with an “empty” hand. Then it remains to gradually bring the movement of the hand closer to that described in the rules.

You can practice the landing gesture and the pushing method. Stand in front of the dog facing it. Take the leash in your left hand and pull it slightly. Give a voice command and bring your right hand from the bottom up, making a simplified gesture and hitting the leash with your hand from below, forcing the dog to sit down. Just as in the first case, over time, stop giving the command with your voice.

The gesture for laying is given as follows: the straight right hand rises forward to the level of the shoulder with the palm down then drops to the thigh.

You should start practicing the skill of laying by gesture when you have mastered laying in the main stance and maintaining a given pose with the trainer leaves.

Secure the dog in a sitting or standing position. Stand in front of her at arm’s length, take the target in your right hand and move your hand from top to bottom, carrying the target past the dog’s nose, aim it at the laying. At the same time, say the command. Of course, the gesture is not very correct, but this is permissible. In the second or third lesson, the target is removed, and as the dogs are trained, the gesture is reproduced more and more correctly.

As in the case of landing, the laying gesture can also be taught by pushing. Having secured the dog in the “sitting” or standing position, stand in front of the dog facing it at arm’s length, take the leash in your left hand and pull it slightly. Then give a voice command and make a gesture with your right hand so that the hand hits the leash from top to bottom, forcing the dog to lie down. In the future, lower the voice command and get the dog to perform the gesture action. 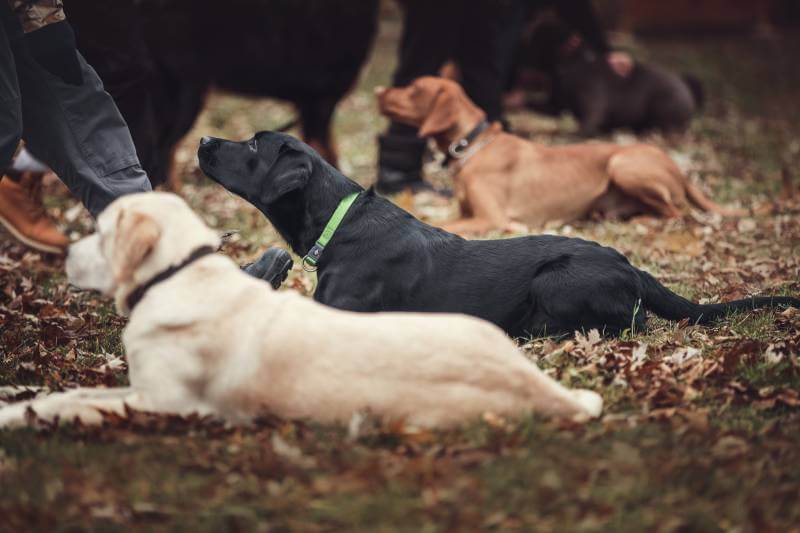 The gesture initiating the dog to get up and stand is carried out as follows: the right hand, slightly bent at the elbow, is raised with a wave up and forward (palm up) to the level of the belt.

But, before you start practicing the gesture stance skill, you and your dog must master the stance in the basic position and maintain the given posture when the trainer leaves.

Fix the dog in a sitting or lying position. Stand in front of the dog facing it at arm’s length. Take a food target in your right hand, bend your elbow, bringing the target to the dog’s nose, and moving the target up and towards you, place the dog. Then the target is removed and gradually, from session to session, the gesture is made more and more close to the standard.

If you need to teach the dog to perform the required at a distance, start increasing the distance only after the dog begins to take the desired posture at the first command in the immediate vicinity of you. Do not hurry. Increase the distance literally one step at a time. And work as a shuttle. That is, after giving the command, approach the dog: if the dog has fulfilled the command, praise; if not, help to do it.