A dog’s scent is probably its most amazing and interesting ability. A dog’s sense of smell allows him to distinguish many smells, including old ones or from a great distance. In this article, we will talk about exactly how this sense organ works, how many smells a dog can distinguish, and how you can test his sense of smell. 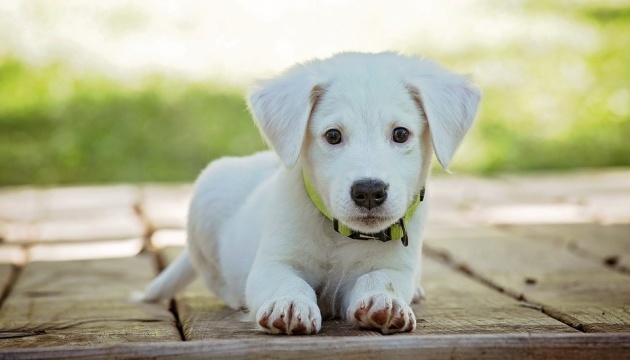 Dogs are known to be very sensitive to odors. By smell, your pet is able not only to find food and detect other animals at a considerable distance but also to determine whether they are familiar or strangers, what gender they are, what their physical and emotional state is. With the help of his sense of smell, the dog distinguishes a huge number of objects and freely navigates the terrain. She constantly smells, and it would be more correct to say – lives in the world of smells. Animals that rely heavily on their sense of smell are called macrosmatics, and it is to this group that dogs belong. People belong to microsomatics, that is, we in principle feel smells, but in general we are more focused on other senses.

Unlike humans, a dog smells very accurately. She is able to sense the presence of one molecule of the odorous substance in 1 liter of air or 1 milliliter of water. It was found that under favorable conditions the dog smells at a distance of up to 1 km from their sources, and sometimes even more. If we talk about how many odors dogs can pick up, then the figure turns out to be quite significant. They have been proven to distinguish up to 1,000,000 odors.

The scent in dogs is developed at such a high level due to the structural features of the nasopharynx and the brain. In particular, in the head of an animal, all odors are clearly differentiated by the slightest distinguishing features. In the mixture, the dog senses each “note” separately, even if some smell is stronger and others are weaker. This already shows how many times the scent of a dog is stronger than a person because we smell, for example, perfume or food in general and are not able to accurately break them down into ingredients, especially if one of them interrupts the rest. Interestingly, the dog not only perceives the smell by itself but is also able to determine its concentration, strength, and freshness. Studies have shown that it distinguishes odors by age with an accuracy of 3-5 minutes.

For humans, it is of particular importance that conditioned reflexes to smells and their individual “parameters” (strength, age, individuality, etc.) are easily formed in dogs. This makes it possible to successfully train four-legged assistants and use their excellent instinct for a variety of purposes.

How a Dog’s Sense of Smell Works 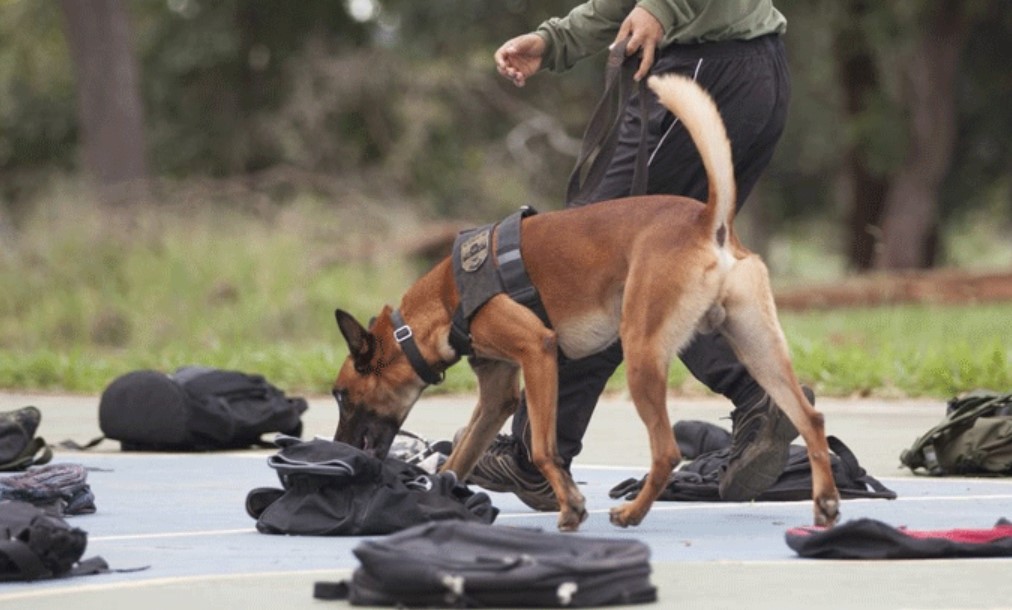 Considering what an accurate sense of smell our pets have, it is interesting to understand how a dog’s olfactory organ works and why it works so well. In general, the sense of smell of a dog and a person functions according to the same scheme. Special receptors located deep in the nasal cavity capture molecules of various substances in the air and form the sense of smell, transmitting them to the brain. These receptors form the olfactory epithelium, and in dogs, its area is 250-400 square meters. cm (for comparison – in humans it is usually about 7-10 sq. cm) and consists of 125-224 million olfactory cells. Moreover, the very layer of the epithelium in our pets is 15 times thicker than ours. Each such cell has a large number of thin cilia, which greatly increases the olfactory ability. All this provides high sensitivity to the smallest particles of odor substances in the air.

At the same time, a dog is much better than a person able to regulate the sensitivity of its olfactory system. First, it controls the nostrils more efficiently. Second, it can alter breathing to better smell. Usually, only about 5% of the inhaled air passes over the olfactory epithelium, and more than half of the odorant is simply absorbed in the nasal cavity. Therefore, when the dog is faced with the task of sniffing, he takes deeper breaths or several short ones in a row.

In the olfactory region, the molecules of odorous substances come into contact with the villi of the olfactory cells and enter into physicochemical reactions with the membranes of the corresponding neurons. Depending on the smell, these reactions are of different frequency, strength, amplitude, and duration. These parameters are delivered to the nerve centers of the olfactory zones of the temporal lobe of the cerebral cortex. Here is the so-called olfactory brain, which analyzes the information received and forms certain smell sensations, which are associated with their source. Thus, the dog remembers not just the smell, but the scent image.

How Dogs Use Smell: Bottom and Top 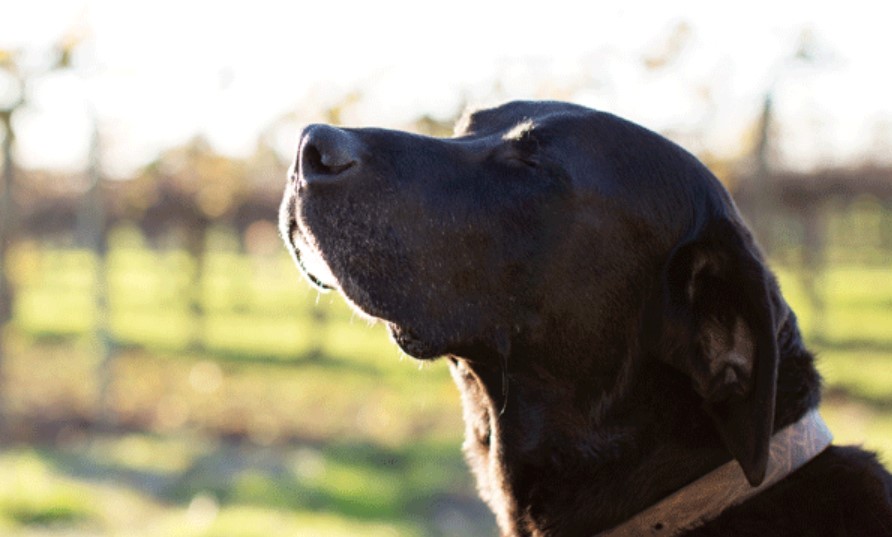 As we know, dogs can easily determine the presence of footprints of another animal or person, understand in which direction the footprints lead, and follow them. But how does this process take place? Having found the trail, the dog, sniffing, crosses it several times, as if making a “figure eight”. Such movements allow her to compare the freshness, intensity, and direction of displacement of scent particles of the trail and soil. As a result of the analysis, the animal understands how long ago the trail was left and in which direction it leads. Next, the dog begins to move, tilting his head down and following invisible scent prints on the ground. Accordingly, this kind of instinct is called lower.

Completely different behavior is characteristic of an animal that smells an unfamiliar smell or is studying the environment. In such situations, the dog usually lifts its muzzle upward and vigorously draws in air, turning its head and body against the direction of the wind. These movements help to capture the odor particles brought in by the air currents and determine the source of the odor and the distance to it. Such a sense is called the upper, and the very ability to catch a smell at a distance is called the range of sense. How many meters a dog will smell this or that smell depends to a large extent on a number of factors: on the source itself, on environmental conditions (extreme cold and heat, like rain and fog, interfere with the sense of smell).

Everyone is familiar with the situation when, entering the room, we felt any strong smell, and after a certain period of time we stopped feeling it. Scientifically, this process is called olfactory adaptation, that is, it is the ability of humans and animals to adapt to the perception of various smells. The considered example is a case of negative adaptation. Since the smell in the room was very strong, the brain began to simply ignore it, so that it did not interfere with us “working” with other smells.

This principle is equally true for humans and dogs. But if for us negative adaptation does not pose any special problems, then for animals it can lead to the fact that they simply cease to sense the trail. As a rule, the dog begins to ignore the smells of the same concentration when he quickly follows fresh tracks and does not break away from them. To avoid this, the animals are taught to follow the trail in a zigzag manner (shuttle). So the desired smell becomes stronger, then weaker, and negative adaptation does not occur. If you want to train your dog to follow the trail, keep this in mind and teach your pet to move not directly on the trail, but as if to wag around him.

We add that, in addition to negative adaptation, there is also a positive one. It is understood as a process when the sensitivity of receptors, on the contrary, increases, which makes it possible to capture the minimum doses of an odorous substance and work with traces of a long time ago. 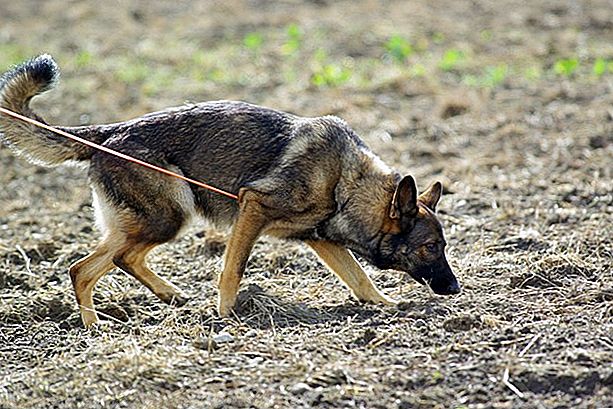 A professional test of smell is carried out when selecting dogs in various cynological structures, where such a unique sense of smell is very useful. In particular, the search, search, and rescue, mine-search services are glad to see dogs. Dogs work in teams for the search and detection of drugs, explosives, weapons, ammunition, etc. In such cases, testing of smell and selection of suitable animals is taken with particular seriousness. However, an ordinary owner does not set such important tasks for a four-legged friend and can conduct a less complex test even at home, partially replicating the techniques of professionals.

The simplest way is to place 5 pieces of meat in different places on a plot of 25 x 25 meters. By the fact whether the dog can find all the pieces and how quickly it does it, they judge its sense of smell. Several important conditions: there should be no other strong odors in this area, and the dog and its owner should not be able to peep where the pieces lie.

Another way that is available for repetition in everyday life is to test the ability to find and select a small aported item from a large number of similar items. To do this, you first need to teach the dog to find and pick up a thing thrown in front of her in the grass or low bush (this is necessary so that she does not look for an object with her eyes, but switches to the sense of smell). Then, already directly during the scent test, in full view of the dog, a small object that has the smell of the owner or assistant is thrown into a pile of objects of the same size and color. When dogs are tested by dog ​​handlers, the total number of items usually goes up to 50-60. An animal is assessed by its ability to find what it is looking for, as well as its overall search activity. If the dog does not show any interest in the process, subsequent training will probably not bring the desired results.

Another way from the arsenal of employees of the search services is to test the ability to detect the odor trail. Practice shows that some animals can find a thing by smell, but they are not able to take a track and follow it. For such a check, two assistants lay two tracks with a difference of 25-30 meters. In this case, the second assistant before this rubs the shoes with meat or sausage or ties the pieces to the sole.

The trainer brings the dog to the first scent trail, releases it for a walk, and observes its behavior. Most dogs with a developed sense of smell immediately react to smell: sniff, determine the direction of movement and attempt to follow the trail. If the animal did not react in any way to the first track, it is directed to the second. If in this case, the testing fails, then such a dog is not suitable for the search service. If you have a puppy or young dog, you can also repeat a similar experiment: make a trail yourself and see if your pet can take it.