If you look, then the East European and German Shepherd Dogs have only one breed name in common. However, people who do not understand cynology diligently continue to confuse these two completely different dogs with each other. 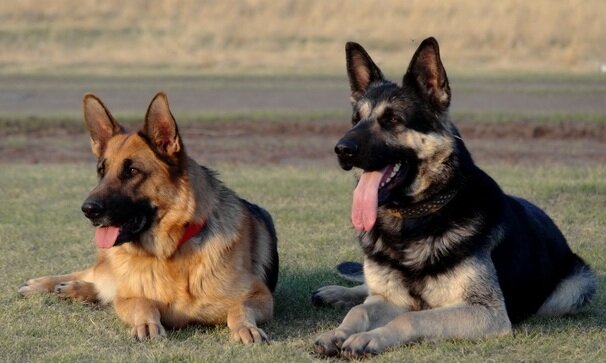 It is easy to guess where the “Germans” and “Europeans” came from by their names. The homeland of German Shepherds is Germany. A new breed appeared in the late 80s of the 19th century as a result of selection. For a long time, they were used as shepherds, and only over time, people were able to discern in these unusually intelligent animals born assistant police officers.

If you put the East European Shepherd and the “German” next to each other, then the difference between them will immediately catch your eye. Due to the fact that the blood of taller Caucasians flows in the veins of Europeans, they are taller and larger than their German counterparts. There are differences in weight, “Europeans” are usually heavier by at least 10 kg.

The main difference between the exteriors is the line of the back of the dogs. If in German shepherds the back gradually drops down to the tail, then in European dogs it is almost even. There is a difference in the depth of the chest, in the East European Shepherd Dogs, it is wider. The paws of immigrants from the USSR are also much larger, stronger, and more powerful.

Important! Common is the color of the dogs. For both the “Germans” and the “Europeans”, the standard allowed for zonal, black-and-back, and black colors. A darker mask may be present on the face of shepherd dogs.

Due to the fact that German Shepherds were originally bred to become shepherds, their temperament is very soft. These dogs are kind-hearted, can find a common language with almost any person, easily make friends with children and quickly establish contact with other pets and farm animals. German Shepherd Dogs are easy to train. A beginner who has no experience in dealing with dogs can cope with the education of a representative of this breed. However, training can take a long time, since in most cases an excitable and restless puppy will perceive it as a game. It’s easy to find shortcuts and little tricks that make training a dog easier, faster, and more enjoyable for both humans and canines when you train many dogs a day rather than just your own. Also, it’s easier to see things from the dog’s perspective, which can provide a hidden explanation for why things don’t work.

Europeans are more restrained, calm, and reasonable. They make better guards than the “Germans”. If the former gets along well with hyperactive people, then the latter needs a calm owner. Training a European Shepherd is as easy as training a German, with the only difference being that the training will take place in a more relaxed environment. Born to be campaigners, these dogs take everything seriously – as a job. Due to their phlegmatic nature, the East European Shepherd Dogs rarely take part in competitions, exhibitions, games. For these purposes, cheerful and artistic restless “Germans” are more suitable.

If we talk about the position on the world stage of these two breeds, the difference between them is colossal. The fact is that the East European Shepherd is still not recognized by the International Cynological Organization. In most cases, you can meet these beautiful dogs only on the territory of the countries of the former Soviet Union. Today it is quite difficult to find an East European Shepherd puppy that fully meets the requirements of breed standards.