Does your dog often have watery, irritated eyes? Then so-called entropion could be the cause. We will explain to you what this common eye disease is all about, how you can recognize entropion in dogs and how the painful malalignment of the eyes can be treated.

What is Entropion in a Dog?

A deformity of the dog’s eye in which the eyelid rolls inward is referred to as entropion. As a rule, the misalignment affects the lower eyelid, less often the upper eyelid is also affected. The misalignment of the skin causes the eyelid to curl inwards and the hair that is thrown in, as a result, has a permanent irritation on the cornea of the eye.

Causes: How Does the Eyelid Entropion Develop in Dogs? 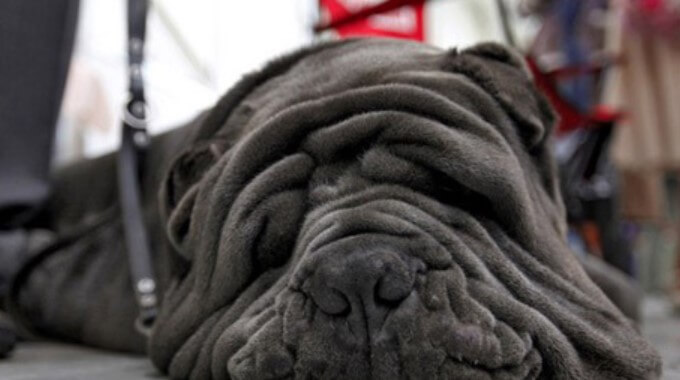 The misalignment of the skin is caused by a defective pulling force of the eyelid muscles. The entropion is usually innate in the dog and therefore already occurs in the puppy. Some dog breeds are more likely to suffer from entropion than others, which also suggests a genetic predisposition.

However, entropion can also occur in older dogs. In old dogs, entropion is caused by weak connective tissue or muscle weakness.

But healthy dogs can also be affected. In this case, the entropion usually arises as a result of injuries in the area of the eye or as a secondary disease after other eye diseases, for example, conjunctivitis.

These breeds are often affected by entropion:

Symptoms: How Do You Recognize Entropion in Dogs?

The fur or eyelashes touch the cornea of the eye through the curled eyelid. This permanently irritates the dog’s eye. The affected eye is severely irritated. Typical symptoms of entropion are watery eyes, frequent squinting of the eyes, redness, and inflammation of the cornea or the conjunctiva.

In severe cases, the entropion can even lead to an ulcer on the cornea. Other signs of a roll lid include sensitivity to light and deterioration in the dog’s eyesight.

Some dogs also try to rub their eyes on their paws or objects to get rid of the foreign body sensation. However, this behavior often causes additional irritation and inflammation of the eyes.

Therapy: How Do You Treat Entropion in Dogs?

Entropion is very uncomfortable and painful for the dog. The feeling can best be compared with an eyelash in the eye: an unpleasant stimulus that you want to get rid of quickly. Therefore, you should not hesitate long in the dog if there is a suspicion of entropion.

The veterinarian can quickly diagnose the roll lid as it is a very common condition in dogs.

Treatment, in most cases, requires surgery. To correct this, the eyelid is surgically shortened and the misalignment is corrected. The dog is then treated with anti-inflammatory ointments containing cortisone or antibiotics.

In puppies, entropion can in some cases be corrected without major surgery. To do this, the eyelid is folded out and fastened with clips or a seam. After two to three weeks, the brackets are removed and a check is made to see whether the correction was successful.