Epileptic seizures are not unique to humans. Our four-legged companions can also be affected: Around one to two percent of all dogs have epilepsy. For many dog owners, an epileptic seizure in their four-legged friend is a big shock. We share tips on what to do if your dog has epilepsy.

Contents hide
1 What is Epilepsy?
2 Canine Epileptic Seizure: The Three Stages
2.1 Signs of an epileptic fit (aura phase)
2.2 The epileptic seizure in the dog
2.3 Restlessness after the attack
3 Do This When the Dog Has an Epileptic Fit
4 Causes: Two Types of Canine Epilepsy
5 Dog Breeds Prone to Epilepsy
6 What Triggers an Epileptic Seizure in the Dog?
7 Diagnosis: How Can You Prove Epilepsy?
8 Therapy: Can Epilepsy in Dogs be Cured?

By epilepsy, we mean abnormal, temporary discharges of brain waves. These lead to temporary disorders of brain function and are accompanied by twitching of the extremities. Many affected people, no matter if humans or animals, lose consciousness during such an epileptic seizure. 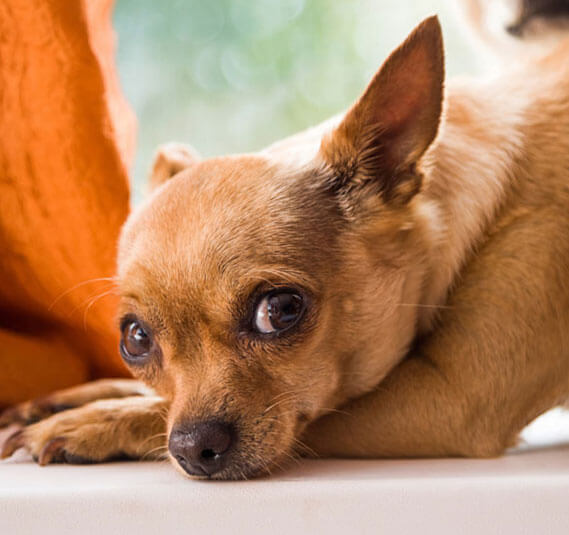 As with humans, we can divide epileptic seizures in cats or dogs into different phases. In particular, looking carefully at signs of the aura phase can help epilepsy dog owners assess when the next seizure is coming.

This phase before the actual seizure manifests itself in unusual behavior on the part of the dog. He is particularly affectionate or withdrawn, desperately wants to go outside or inside, and appears restless. This phase can last only a few minutes or even days.

The epileptic seizure in the dog

Most dogs fall over at the beginning of the seizure. Cramps make the limbs stiff, and short periods of relaxation are possible in between. Some dogs lose urine and increase saliva during a seizure. Brief losses of consciousness also occur. An epileptic seizure in a dog lasts a few minutes at most.

It may look awful, but don’t worry, your dog won’t feel any pain.

Restlessness after the attack

After the seizure, the dog is slow to calm down. Some show movement disorders that soon go away. Some dogs are more restless for weeks after the attack.

Do This When the Dog Has an Epileptic Fit

If your dog or a dog in the vicinity has an epileptic seizure, the best thing you can do is: keep calm! Realize that you have no control over the seizure.

Do not hold the dog, as you could be injured by your unconscious movements.

If you hold his head, there is a risk that he will bite. If necessary and possible, make sure that your dog does not bump himself. Drape a pillow between it and sharp-edged furniture. Or stand between the dog and a dangerous staircase. Some dog owners report that talking to them in a soft voice makes their dogs calmer. However, this has not been proven.

It is particularly useful to document the epileptic seizure. If your smartphone has a video function, you can make a video of the seizure. This can give your veterinarian valuable information for further treatment of epilepsy. Write down the time, location, and duration of each seizure and record it in an epilepsy journal. This gives you and the vet an overview of how often the dog has seizures. In some cases, such documentation provides information on the triggers of epileptic seizures.

The cause of epilepsy remains unclear in around half of the dogs. Experts then speak of idiopathic epilepsy.

In many of them, however, epilepsy is hereditary. Although there is no organic cause, affected animals suffer from epileptic seizures. Between attacks, they are perfectly healthy and unaffected. If epilepsy is the result of another disease, it can have various causes. These include brain tumors, head injuries, liver or kidney problems, toxins, infections, or low blood sugar levels.

Some dog breeds have been shown to be prone to hereditary epilepsy. These include Poodles, Border Collies, Labradors, and Golden Retrievers, Beagles, Shepherds, Dachshunds, Bernese Mountain Dogs, and Australian Shepherds. Before buying a puppy of a breed prone to epilepsy, find out what prophylactic options there are in breeding. For example, the Lagotto Romagnolo has an above-average tendency towards juvenile epilepsy. It breaks out as early as a few weeks old. Friends of the breed should therefore buy from breeders who take targeted preventive measures. Because this form of the disease can be detected via genetic testing, reputable breeders do not mate carriers of traits with each other.

What Triggers an Epileptic Seizure in the Dog?

Especially in idiopathic epilepsy, some dogs react more often too stressful everyday situations with epileptic seizures. Triggers can be, for example, unusual noise fights with other dogs or stress when staying alone. The dogs are then “overexcited”, which can lead to the disruption of the nerve cells in the brain.

Diagnosis: How Can You Prove Epilepsy?

The vet diagnoses idiopathic epilepsy by elimination. Various examinations may be necessary for this. In addition to a conversation about the dog’s medical history – for example with regard to related animals – examinations of blood and cerebral fluid, as well as MRI or computed tomography recordings, are possible. Your records are valuable in the form of an epilepsy diary. If there is an underlying disease such as a brain tumor behind epilepsy, the veterinarian comes across this in the course of making the diagnosis.

Therapy: Can Epilepsy in Dogs be Cured?

Idiopathic epilepsy in dogs is incurable – but in many cases, it is easily treatable. If it is idiopathic epilepsy, the veterinarian will decide whether drug therapy makes sense. It is not absolutely necessary if there is less than one seizure per quarter and brief seizures of up to a maximum of four minutes. Setting the drugs against epilepsy is time-consuming and takes weeks. However, many dogs can be treated well with it and lead a life without restrictions. However, some four-legged friends do not respond at all to drug therapy. If the epilepsy is based on another underlying disease, the veterinarian will start the therapy here.