The small, beautiful horses are named after a farmer from Argentina who was the pioneer in breeding them. Due to its miniature build, the Falabella breed is often mistaken for Shetland ponies. Although, these are two distinct varieties.

Falabella cannot be called a pony in any way, since they are an independent species, only surprisingly small in size. At the withers, their height is only 85 cm, with a weight of 50 kg.

By the way, it should also be noted that in the next generation the offspring appears even smaller.

The History of the Breed 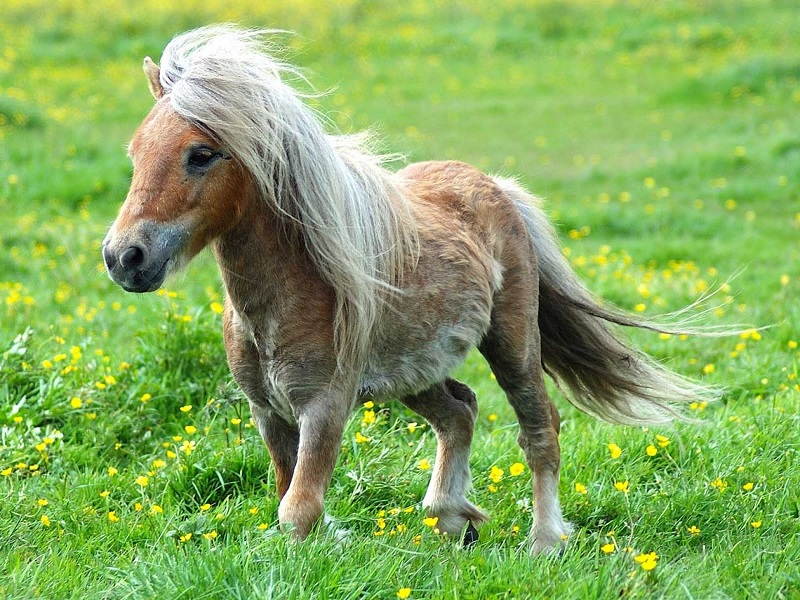 There is no single version in this question. The history of the birth of this breed is shrouded in many different legends. In total, there are three versions of the appearance of such horses in the world:

Be that as it may, in the end, the Irishman Falabella was engaged in breeding small horses. For a long time, he did not sell horses of this unique breed, and if he made such transactions, he initially castrated the stallions. It is known that even the Kennedy family wanted to acquire such amazing animals, and they succeeded. True, only one stallion and one mare. After some time, Falabella gave in to his principles a little and sold four stallions and a few mares to the Fisher family. And only after that, the undersized breed began to spread throughout Europe. 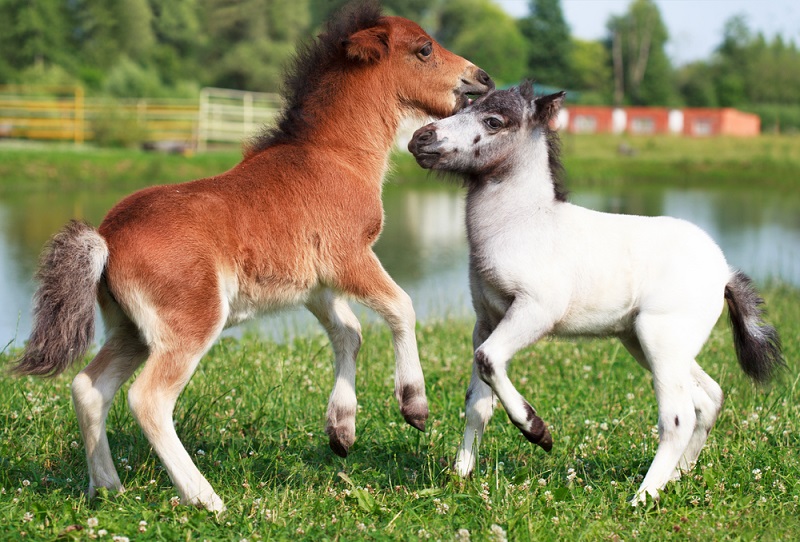 Although the Falabella breed is often confused with ponies, they are still very different from each other. The latter has a short, but large build, which looks rather coarse. And, in the Falabella, everything is very elegant: slender small legs, proportional head to body, graceful posture, and beautiful withers.

The largest horse in the world, measuring 86 cm, is recorded. The weight of the representatives of the miniature breed does not exceed 65 kg, while the pony can reach 120 kg. One prominent representative of the Falabella is a stallion with a height of only 35 cm and a weight of 9700 g.

As mentioned earlier, in each new generation, the offspring are born smaller and smaller. And, even if you cross a stallion of this breed with an ordinary mare, the Falabella genes will win and a small animal will eventually be born. Of course, in this case, insemination can only be done artificially.

It is worth noting that Falabella horses are not adapted to a heavy load or rider. They will do just fine with a cart with one or two small children. To a greater extent, these animals are bred for aesthetic beauty. After all, outwardly they are folded perfectly. One gets the impression when you see them that the Falabella is a small copy of the Arabian horses.

As for the nature of such horses, everything is quite simple in this matter. Horses of this breed are very friendly, understanding, calm, and kind. They are easy to train. Children can be easily admitted to such horses, and they are not afraid that the animal will somehow harm them. It is also worth noting that undersized horses can easily be called true horses, because they quite easily overcome various obstacles, jump high and run fast. 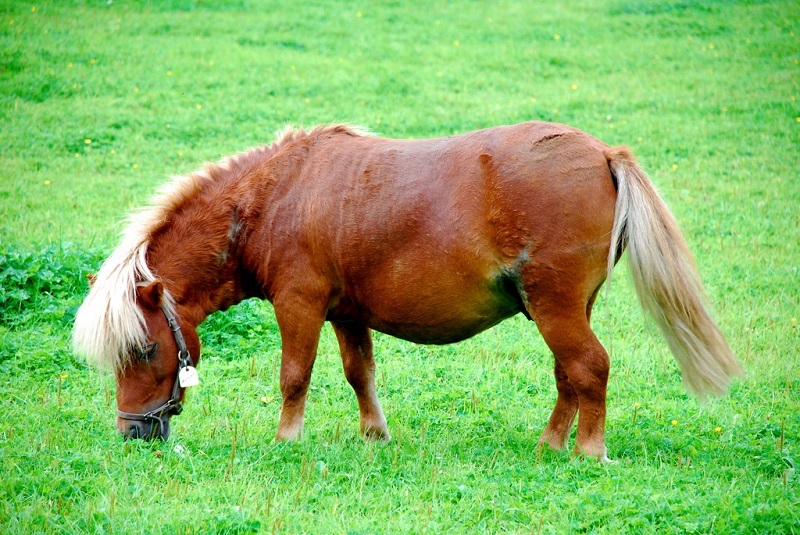 Horses of this breed are quite unpretentious and absolutely undemanding in caring for them. Falabella, like other animals, simply needs care and love.

As for the content, the miniature horses most of all like to live in nature, that is, in an open enclosure. You can build it near the stable, where animals will spend the night or hide during bad weather. Or, you will have to build a small shelter near the corral for the warm season.

In winter, horses must live in a stable. This building must be well insulated, all drafts must be eliminated it. Of course, a nursery for feed and drinkers for water should be built in each stall. These devices must be securely attached to the floor or wall so that the animal does not overturn the contents on the floor.

In the cold season, you need to insulate the platform with straw, hay, or sawdust so that the animal does not freeze during rest or sleep. This is especially true for pregnant mares.

Another point of maintenance is horsehair care. It is especially necessary to monitor the condition of the hairline during molting, which occurs in late winter – early spring. During this period, you need to carefully comb the coat.

Also, Falabella horses are prone to respiratory diseases, therefore, if possible, it is necessary to insulate the room for their maintenance in winter, and carefully monitor the vitamin composition of the diet in order to avoid vitamin deficiency and lower immunity. In addition, tetanus and flu vaccinations are also carried out.

This question, like the care, is not particularly difficult. The main components of the diet of the horses of the breed we are considering are fresh herbs and hay. In addition, of course, you should give the animals to eat vegetables: cabbage, carrots, beets, and potatoes. Don’t forget about the concentrated feed. True, in this matter you cannot overdo it, so as not to cause allergic reactions and digestive problems in the animal. Before each grain feeding, the horse should be given plenty of water to drink. In total, miniature horses need to be watered three times a day – during the hot season, and twice – in winter.

These animals are fed twice a day (morning and evening). During the day, horses should graze on their own if they get hungry. 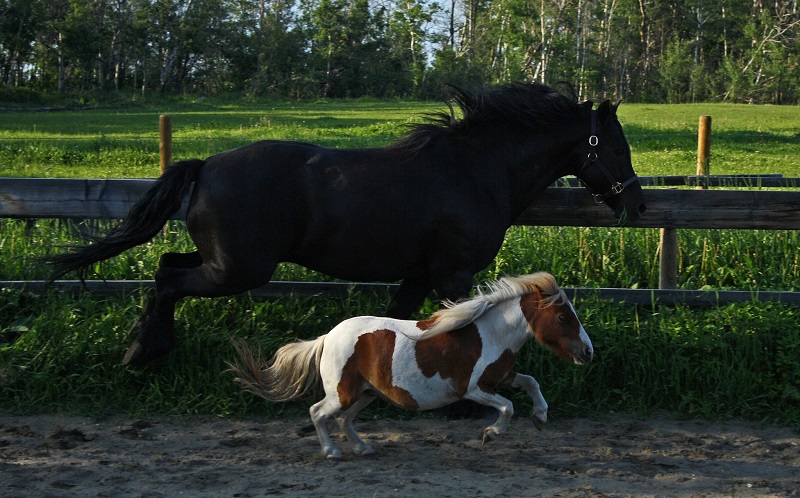 When horses are connected, it is very easy to understand that the mare is “on the hunt.” She turns her back to the stallion and lifts her tail, calmly standing still. If the horse beats the male with its hooves, it means that it is not ready for mating.

The foal filly becomes noticeably calmer, its character changes for the better, the impulses to jump and frolic are reduced.

The day before the foal, the horse becomes less calm. She is noticeably separated from other animals. He can independently go to the stable, where he will wait for the very process of giving birth to his baby.

Most often, foals are born in the first two months of spring. Feeding the baby a day can be about 50 times. A foal in its natural habitat will suckle breast milk for up to nine months.

On private farms, the baby is removed from the mother a little earlier, at about five to six months. Then they are kept in separate rooms.

Young horses lend themselves best to training between one and a half years and three. From the outside, you can see how friendly these animals are with each other. How interesting they frolic, communicate.

At the age of four, horses of this breed become adults and calmer. On average, the life expectancy of Falabella can reach 40 years, the maximum recorded figure is 45.

Such amazing miniature and unusually beautiful horses exist in our world and delight the eyes of many inhabitants of the planet Earth.