The Airedale, like most terriers, was bred for hunting. As a result, the dog came out very intelligent, strong, but willful. If trained correctly, the Airedale Terrier can be an excellent choice for a family. The Airedale can do well with cats and other small animals, especially when raised together. 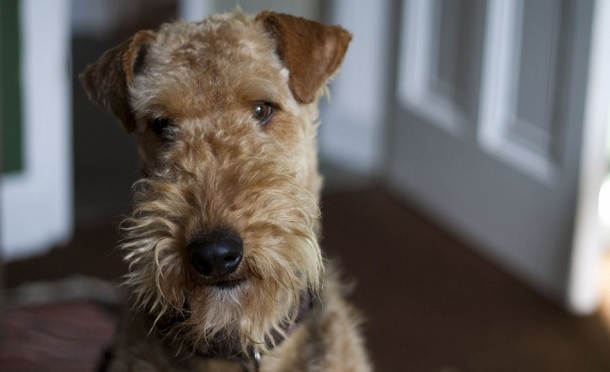 Airedale Terriers have participated in almost all wars and have proven their reputation as excellent working dogs.
History has preserved the story of Airdale Jack, who saved an entire battalion from death. Under intense fire, he carried an important message in a collar for 3.5 kilometers. A wounded man came running to the headquarters, with a broken paw and a broken jaw. Delivering the package, he fell down dead.

The Airedale Terrier Kashtanka, despite a head wound and a torn ear, was bleeding to death and delivered important reports. There was no time for sentiment and treatment, the dog was somehow bandaged and sent back – alas, this was the only way to keep in touch. So the dog ran back and forth near Narofominsk – bandaged. She died from the shell but remained to live in the memory of many fighters.
On the defense of the Krest heights, the airedale Freya covered 70 kilometers in a day – 33 races. The last message was delivered, being mortally wounded.

The silent, brave Leo, for whom “both people and animals are an empty place”, ready to fight a bear alone, is a character in W. Faulkner’s “The Bear”.

Airedale Terrier Sheriff (“the dog’s boss”) is the hero of one of I. Volk’s stories (the collection “Elbrus finds a trace”).
The plot of the humorous story by J. Tuber “The dog that bit everyone” revolves around the Airedale nippers Muggs.

Airedale Terriers were a favorite breed of J.O. Kerwood. That is why the main character of the story “Kazan” made Peter’s half airedale, half Canadian hound. “Peter was ugly, but the blood of two most beautiful dog breeds was mixed in his veins” – this is how the story begins.

Airedale Terrier Snooki is one of the main characters in B. Ryabinin’s book “My Friends”. This is how the author describes his first acquaintance with the breed: “While all the other living exhibits of the exhibition were torn from their leashes, they were noisy, barking, howling, growling, raging, in every way protesting against the fact that they were brought here and placed in this motley unfamiliar company, none of the airedales made a sound. They were completely indifferent to all this noise: they lay quietly with their bearded red muzzles in front of them. Only clever brown eyes closely watched from under the overhanging eyebrows everything that was happening around, and the elastically pulled paws under them testified that any of them was ready to jump up every minute and, if necessary, repulse anyone who thought of touching them. In all other respects, they were exactly the same dogs, like all the others, they licked their owners just as much, rejoiced at their arrival, wagged their short red stump-tail in a moment of special excitement, even barked with a jerky pleasant contralto … ”

The Airedale Terrier is the protagonist of Karl Czapek’s story “Minda, or About Dog Breeding”.

They also appear in detective stories by G. Mitchell, J. Dale’s novel “The Red-haired Runaway” and I. Metter’s book “Dogs”.

Airedale Terriers in the Movies

Airedale terriers have established themselves as excellent film actors.

Airedale Terrier Chingiz played the role of Bubrik in the mini-series The Life and Adventures of Four Friends.

Airedale is starring in The Ballad of Hector (Walt Disney production).

They appear in the films “Puppy from the Constellation of the Hounds of the Dogs”, “The Personal File of Judge Ivanova”, “101 Dalmatians” and others.

Airedale Rufus is a character in the cartoon “Hunting Season”.

Theodore Roosevelt said that the Airedale is the best breed. They embody the virtues of all breeds, so they can “plug in the belt” any other dog.

Warren Harding’s dogs LadyBoy and Lady Buck have bronze monuments. About 19,000 newspaper distributors chipped in on these statues – a cent each.

And the first dog of the president, LadyBoy, was awarded an official portrait. Photo of the dog is kept in the Library of Congress.

The Astors, the most famous of the passengers on the Titanic, took the Kitty Airedale with them.