Not every breed can boast of such an ancient origin. The exact date of the appearance of the Japanese Chin cannot be determined even approximately. According to one version, the breed has existed for about 3 thousand years. 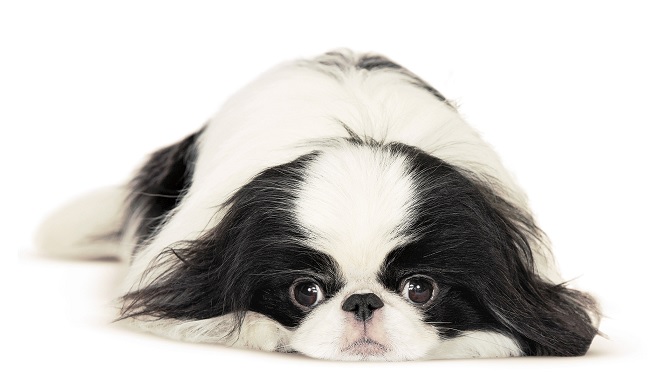 In Japan, Chins were considered the Holy Lions of the Buddha, lived in palaces and temples, and were included in high society. Under the pain of death, ordinary people were forbidden even to touch them.

In the temples, there are images of these dogs. They were also embodied in figurines, depicted on porcelain vases.

In the 14th century, there were already herd books, but the selection methods were kept secret.

The best were dogs with slanted and round eyes. The forehead had to be decorated with a blaze or a white spot, the ears had to be black.

All elements of the exterior were thoughtful. The blaze on the head is a clipped samurai forehead. Black ears – hair fluttering during the fight. Lush collar and “skirt” – kimono. Even the movements – light and mincing – resemble the gait of a Japanese in a ghetto – the national shoe.

Japanese chins were valued for their ability to treat stress and depression and restore mental balance.

The first Japanese chins reached Europe in the 17th century. The first happy owner of a representative of the breed was the wife of King Charles II of England, Catherine of Portugal.

In 1854, the Emperor of Japan presented several Chins to Queen Victoria of Great Britain. And soon these representatives of the Land of the Rising Sun firmly established themselves in the homes of the English nobility, earning love and admiration.

Until 1977 the breed was known under the name “Japanese Spaniel”, but since August 1977 it is officially called “Japanese Chin”.