English and French Bulldog breeds are somewhat similar, somewhat different, so sometimes it becomes a question of which bulldog to choose. To help you figure it out, let’s compare and analyze both breeds.

Difference Between French and English Bulldog 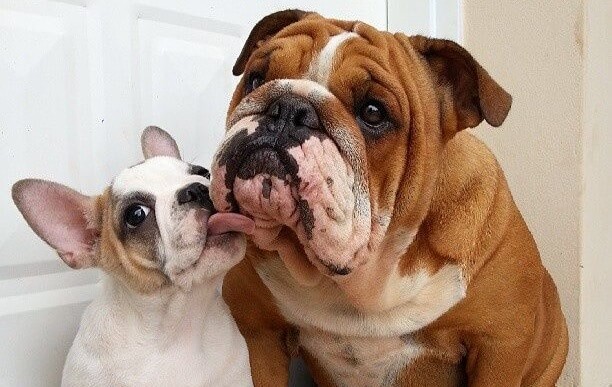 English Bulldogs are bigger than their brethren.

An English Bulldog can grow up to 40 cm when a French is no more than 35.

The “English” have a large head and broad shoulders, the “French” have everything in harmony and proportion.

The ears of English Bulldogs always lie, while French Bulldogs are distinguished by erect ears and rounded edges.

The forepaws of the English Bulldog appear slightly arched due to the strongly developed forearms and broad chest. French Bulldogs are straight-footed.

The English bulldogs were fighters, but the French have no idea what a fight is.

The English Bulldog is a breed much older than the “French”, one can call the “French” descendants of the British, their modification. Therefore, in general, they are similar in temperament, although English Bulldogs are more phlegmatic than their younger counterparts.

The French Bulldogs are more mobile and emotional. They are ideally adapted to the conditions of an urban apartment, by and large, because of their simplicity in care, pleasant temperament, and small size. They will fit perfectly even in a small living space. While the English Bulldog will take a tangible place.

The differences in the structure of the nose and cheeks of both breeds are immediately evident. French Bulldogs have less wrinkling and flattening in this part.

Because of this feature, English Bulldogs mostly breathe through the mouth, trapping portions of air into the stomach, which leads to frequent and strong gas formation. Which of course is not a plus for the breed.

Bulldogs snore in the same way, but breeders claim that this does not cause any inconvenience.

In general, it can be summed up as follows. If the living space does not allow for large dogs, then the French Bulldog will perfectly fit into the modern way of life.