At first glance, the French bulldog looks like a miniature version of the large English bulldog with a pug face. In fact, it descended from the English Bulldog and was later crossed with other breeds, most likely including the Pug. Therefore, the resemblance between these two dogs is no coincidence, but genetic. There are also some similarities between the three in character. They are considered to be mostly good-natured and easy-going.

The Nature of the French Bulldog

Even if the French bulldog has a rather grumpy facial expression and a stocky physique, it is very affectionate in its family and is especially friendly towards children. She is usually easygoing and easy-going, but can also be very determined when it comes to protecting her family from (perceived) enemies. Even when she encounters larger dogs, she tends to be fearless, partly because she overestimates herself. So that she does not lose out in a fight at some point, you should bring her with larger members of her species in good time so that she can better assess her own strength. 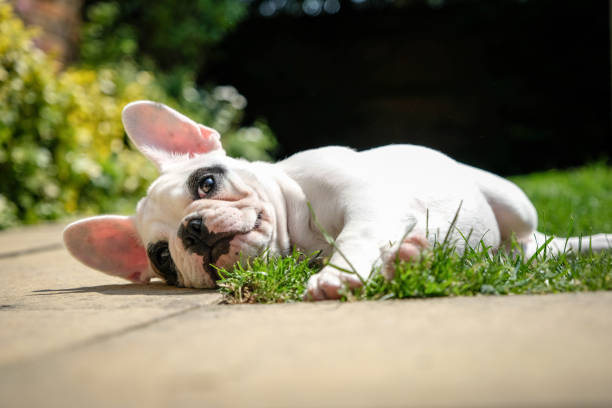 The French bulldog is happiest in the company of his family, lovingly rolls on the carpet, and is a real couch cuddler. Since she is very fixated on her people and needs close contact, she should be included in all activities and never left alone for long. Otherwise, their claims are very easy to meet. She doesn’t need any ambitious hikes or even dog sports, but still needs enough exercise to avoid becoming overweight.

Sometimes it’s enough if she just frolics around in the garden. However, she should be supervised when doing this as firstly she really dislikes doing anything alone and secondly, she is very sensitive to temperature and can overheat very easily on warmer summer days. In addition, she has to shift down a gear during particularly exuberant games, as she tends to be short of breath due to her shortened nose. She, therefore, appreciates long walks that are adapted to her own pace.

Snoring is Completely Normal When Bullying…

The French Bulldog gets along well with other dogs and pets most of the time, including cats if they get to know them early in life. There are only problems with French bulldogs of the same sex. There is a competition that can turn into aggressiveness. Quite in contrast to her otherwise very good-natured behavior, which she also shows towards children. She also does not usually snap or bite unless extremely teased.

Their friendly nature makes them unsuitable as guard dogs. In general, it is also rather difficult to teach her something because she has a mind of her own and can be very stubborn, although she usually wants to please her owners. Under no circumstances should this supposed disinclination be met with harshness during training. Only patience and consistency eventually lead to the desired success. Excessive strictness, on the other hand, is counterproductive. The bully would stop cooperating and offend.

French bulldogs snore when they sleep because of their flat nose. Depending on the situation, it can be more or less severe, but it can never be completely avoided. Order fanatics will also have a small problem with their fur, the hair of which is spread throughout the house or apartment.

The French bulldog is between 18 and 21 centimeters in size and weighs between 8 and 14 kilograms. Since the limbs are quite short, it has a rather stocky appearance, which is accentuated by the round head. Unlike the English bulldog, the ears stand straight up. The face is rather angular and the skin is wrinkled. The tail, a so-called corkscrew tail, can be short to very short. The French Bulldog has a short and sleek brindle coat (a mix of black, blonde, medium to dark brown).

Live and let live – that seems to be the life motto of the good-natured French bulldog. She likes to lie on the sofa, to be petted, to do a few laps, to lie down again, to be petted again… But there are some things that make her composure suddenly fall. On the one hand, this is being alone. If there is even a suspicion that the family wants to leave the house without a bully, the French bulldog will become restless. Because if there’s one thing she hates, it’s being alone. 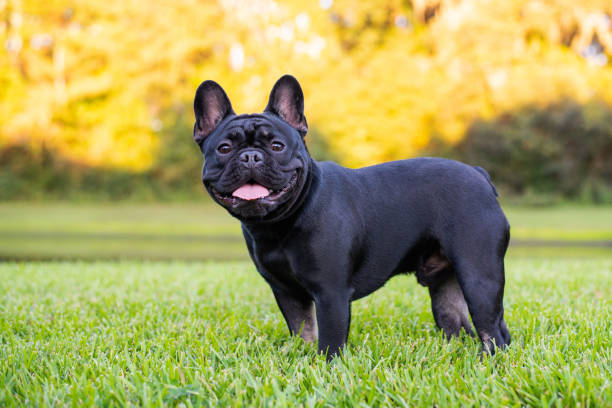 What she dislikes almost as little is physical exertion, which can also be dangerous for her health, as well as other French bulldogs of the same sex as herself. In the event of imminent danger, whether real or not, the even-tempered French bulldog transforms itself into a dog that takes on any opponent. At least in her imagination, because she overestimates herself when it comes to “fighting for the good of my family”. Here the skill of the dog owner is required to protect his Bully from harm.

However, if the general data is correct and none of the emergencies just mentioned occur, enjoy the French bulldog and let everyone else share in your happiness. She is friendly to all people and almost all animals (with the well-known exception). She especially likes children, even if they shouldn’t expect too many games from her. However, she likes to be entertained and petted by them.