Small cause – big effect. As with many parasites, this also applies to Giardia. At least when immunocompromised dogs or puppies are affected. We explain what to do if your dog is infected with Giardia.

Contents hide
1 What is Giardia in Dogs?
2 So the Dog Can Get Infected with Giardia
3 Symptoms of Giardia in Dogs: Diarrhea
4 Giardia: Infecting People
4.1 Children Can Show Symptoms
5 Giardia in Dogs: Treatment and Prevention
6 How to Prevent Infection After a Giardia Infestation

What is Giardia in Dogs?

Giardia (Giardia intestinalis) are tiny, single-celled intestinal parasites. So they are not worms, but so-called “flagellates”. Experts speak of “flagellates”. Giardia colonize the small intestine. Here they adhere to the intestinal wall of their host and multiply millions of times.

It is estimated that every tenth adult dog in the World is infested with Giardia.

The proportion of infected animals is much higher in puppies. If Giardia colonizes the small intestine of a dog and triggers symptoms of the disease, experts refer to this as giardiasis.

So the Dog Can Get Infected with Giardia 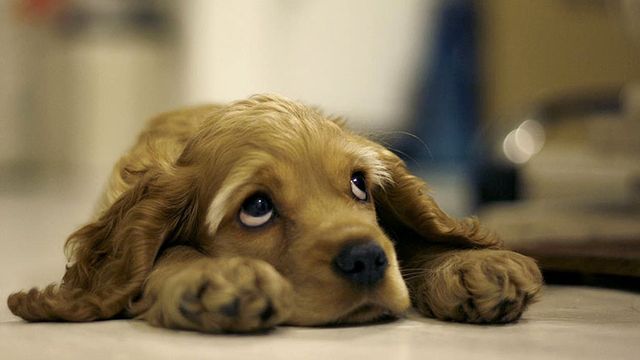 Giardia pass as cysts in the feces of the respective host. Dogs can become infected through the excrement of their own species and other animals such as cats. Drinking contaminated water can also lead to an infestation. The protozoa can survive for several weeks in moist soils and up to three months in cold water. Animals living in confined spaces with others are, particularly at risk. For example, giardia can spread quickly in animal shelters.

Symptoms of Giardia in Dogs: Diarrhea

If your four-legged friend shows these symptoms, the vet can use a fecal sample to determine whether your dog has become infected with Giardia. Worms can cause similar symptoms.

Thus, unnoticed, they become carriers that excrete giardia in the stool and thus infect humans and animals. The vet also determines the Giardia infestation in them by taking fecal samples.

Important: Not every fecal sample in affected infected dogs must contain giardia. Therefore, fecal samples from three consecutive days should be sent to the laboratory.

Unfortunately yes. Giardia can also infect humans. However, not all giardia species in dogs are able to trigger what is known as giardiasis in humans. Because most types of giardia in dogs are dog-specific – experts refer to them as assemblages D and C. Only assemblage A is dangerous for humans – it occurs in less than ten percent of dogs infected by giardia.

People are more often infected in tropical regions and through polluted water – this is when the proverbial “Montezuma’s revenge” occurs. This casual name stands for gastrointestinal diseases that occur while traveling and that tie vacationers to the hotel bed.

But even with your own four-legged friend, an infection can occur faster than expected. For example, if the dog has wallowed in feces with Giardia cysts and you accidentally touch contaminated fur. Especially if children live in the same household, the dog should be checked regularly for Giardia and treated if necessary. While Giardia infestation is often symptom-free in humans, children can suffer from diarrhea or stunted growth.

Giardia in Dogs: Treatment and Prevention

Especially with puppies, it is important to ensure that they are free from giardia. They should be dewormed regularly. Many young dogs are extremely curious and have a tendency to eat or wallow in someone else’s droppings. Anyone who has such a four-legged friend at home should regularly deworm them or have excrement samples examined.

Warning: Not every wormer (anthelmintic) helps against giardia.

How to Prevent Infection After a Giardia Infestation

If Giardia occurs in animal shelters or in a foster home for dogs, all animals must be treated. The outdoor facilities must be cleaned with a steam jet at a temperature of over 60 degrees Celsius, and floors must be disinfected. Since the unicellular organisms survive particularly well in a damp and cold climate, everything should then dry well.

A bath with shampoo is especially useful for long-haired animals. With them, the feces in the area around the anus can stick to the fur. Infested animals can become infected again by licking the anus.

Unfortunately, despite extensive hygiene measures, another outbreak can occur.

This is because the Giardia can retreat into the appendix or the bile ducts for some time. That is why a three-day fecal sample test should be carried out again one month after treatment. Patience and perseverance are required to get rid of giardia for good.