The Indian glass catfish (Kryptopterus vitreous) is an unusual aquarium fish. A distinctive feature of this species is the complete absence of pigmentation in the scales, which makes the body of the fish transparent: you can see the internal organs and even the background in the aquarium. For this, the glass catfish is often called “ghost fish”. In aquarium culture, the fish appeared a long time ago, back in 1934, but the species is still considered poorly understood. As a separate species of catfish was isolated only in 2013, before that it was mistakenly called Kryptopterus bicirrhis. 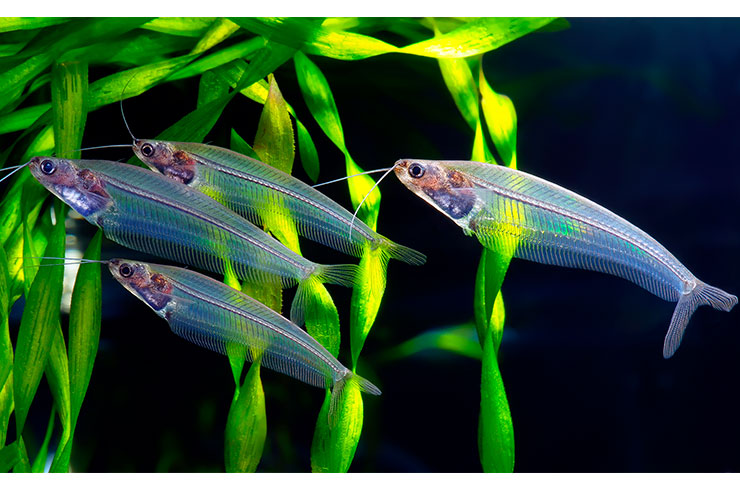 The generic name “Kryptopterus” literally translates to “hidden/invisible wing”, which hints at the absence or weak development of the dorsal fin in this group of fish. And the specific epithet comes from the Latin “vitreus”, which means “glass”.

Glass catfish are sensitive to nitrate levels, so you can only start fish in an aquarium with an established biological balance. It should also be borne in mind that this is a shy fish that must be kept in flocks and exclusively with peaceful neighbors.

The size of the glass catfish in aquariums rarely exceeds 8 cm. The body is elongated, slightly flattened from the sides. The head is small, pointed. The upper jaw has a pair of long sensitive antennae.

The main feature of the fish is, of course, a transparent body. Scales, skin, and muscles are devoid of pigmentation, so the skeleton of a catfish can be clearly seen. The only opaque part is the silvery bursa just behind the head, where the internal organs are located. This color makes the fish less visible in the water, which saves them from predators. When the lighting changes, the body of the glass catfish takes on various iridescent shades with a metallic sheen. 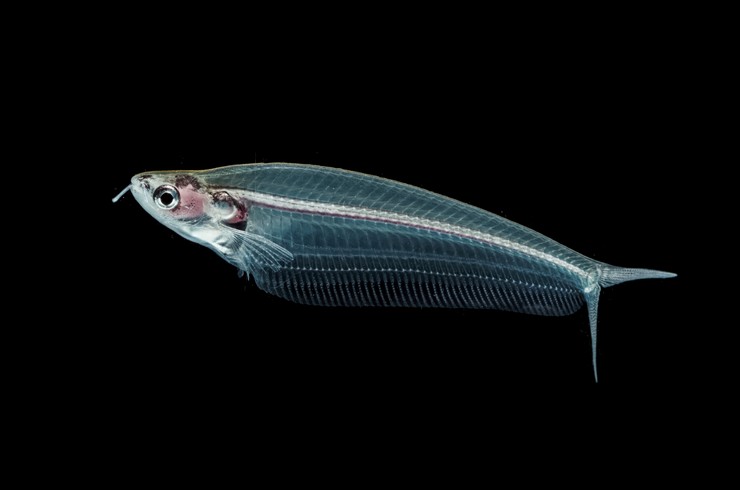 Sexual dimorphism is not expressed, but females are larger and fuller than males.

The homeland of the glass catfish is Southeast Asia. The area includes the river systems of modern Thailand and Indonesia. Fish can be found in stagnant or slow-flowing water, often cloudy. Long antennae allow them to navigate in space. Usually, they keep in small flocks along the river and catch the prey swimming nearby.

Glass catfish are schooling fish, it is recommended to keep at least 10 individuals in the aquarium. It is in such a flock that the fish will feel most comfortable. For this amount of fish, you need an aquarium of 100 liters or more, equipped with an external filter and a good compressor. The flow from the filter should not be strong. Catfish are sensitive to nitrogenous compounds in the water, so they should not be planted in young, unsettled aquariums. The fish are also poorly tolerated by changes in water parameters.

Glass catfish prefer to stay in the upper and middle layers of water. You can choose any soil suitable for growing live plants, which are recommended to be densely planted in the aquarium. Then the fish will feel much more confident. Natural driftwood is well suited for decoration. The lighting should be dim. 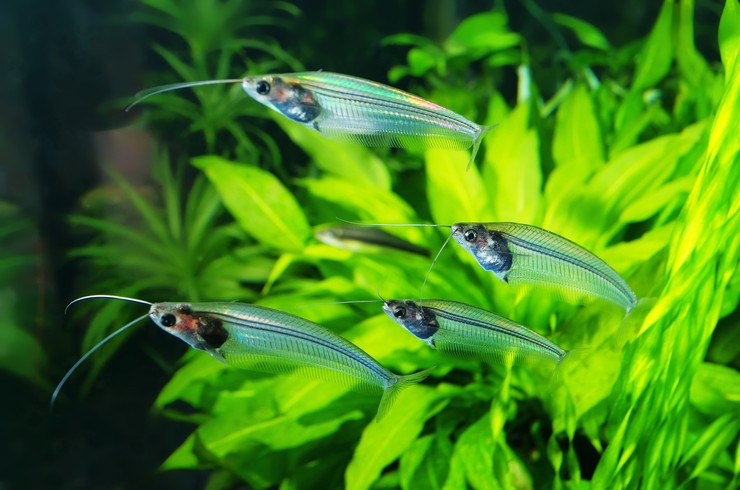 Glass catfish prefer soft and slightly acidic water. It would be superfluous to add Tetra ToruMin conditioner, which will create the effect of “black water”, similar to natural reservoirs.

Weekly it is necessary to change 25-30% of water for freshwater. It is noted that under poor conditions of keeping, the “transparency” of the fish decreases.

Glass catfish are peaceful creatures, they can offend the only fry, which they will hunt. Therefore, the fish are great for keeping in the general aquarium. 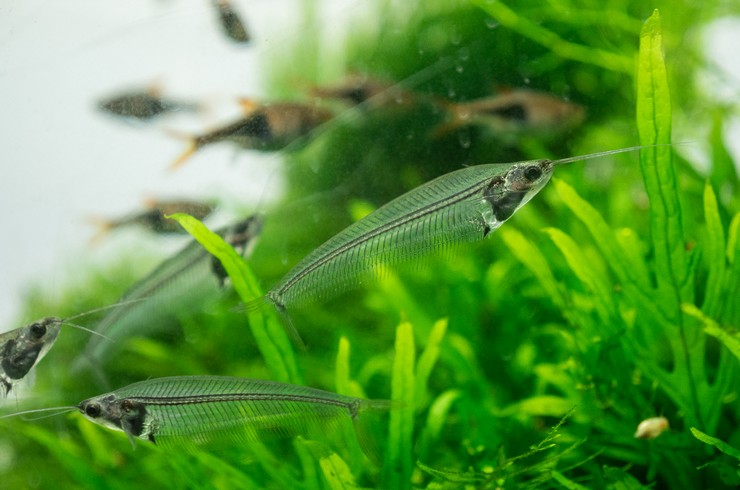 Glass catfish look interesting in a flock with wedge-spotted, red neon, rhodostomus or small gouras, for example, honey. From cichlids, they get along well with scalar and Apistogramma Razmirezi, and from catfish with corridors and ancistrus. Of course, large and aggressive fish should be avoided, kept peaceful, and similar in size.

Breeding glass catfish at home is quite difficult due to the need to recreate the conditions of the rainy season in the tropical zone. It is during this period that the breeding time for fish in nature falls.

Both schooling and pair spawning is possible. A week before breeding, the producers are fed with high-protein feed, after which they are transplanted into a spawning aquarium. To stimulate spawning, it is necessary to reduce the water level to half of the usual and lower the temperature to 22-24 ° C. ¼ part of the water in the aquarium is changed daily. It is also necessary to gradually lower the water hardness by adding soft water to the aquarium every day (up to 5% of the total).

The fecundity of the female is 100-200 eggs. They are deposited mainly on the leaves of plants, after which the producers are removed from the spawning grounds. Egg incubation takes up to 7 days.

Sexual maturity in glass catfish occurs at the age of 1.5-2 years.