The genus of corridors is limited not only by the most popular representative – speckled catfish. On sale, you can find types of different sizes and colors. For example, you can create a golden corridor. He is unpretentious in care, like other relatives, but has a more interesting body color. We will tell you about the features of the content of this catfish in our article.

The golden or bronze corridor (Corydoras aeneus) is a freshwater ray-finned fish from the Kallikhtovaya, or Armored, catfish family. A distinctive feature of this catfish is its beautiful body color, which combines brown and green tones with a characteristic metallic sheen. It seems that the fish is really cast from bronze. The rest of the golden corridor is no different from its closest relatives, including in matters of care. This is an unpretentious fish that adapts well to various water parameters, so it can be safely recommended to novice aquarists.

Fish live in the shallow waters of South America, primarily standing ones. In this regard, the corridors have a number of adaptations: for example, some part of the intestine is used as an additional respiratory organ, and the strong spines of the pectoral fins can act as “stilts”. We must not forget about the famous antennae of the corridors, which help them navigate and find food even in the murky waters.

The fish has a body shape characteristic of most corridors: a rounded belly and a convex back (with a “hump” bend). On the sides, two rows of bone plates are clearly visible, which are located like a tile. They form a dense protective shell that allows them to escape from enemies in nature. 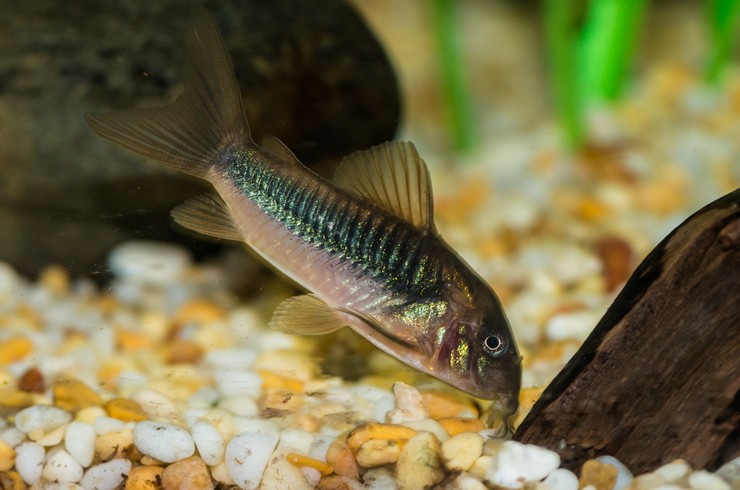 Small eyes are located on the head. Lower mouth, with two pairs of sensitive antennae. Fins are slightly developed, transparent, or yellowish. The maximum body size is 7 cm, females are larger than males.

The general color of the catfish is yellow-brown, with a darker back. In the middle of the body, there is a green strip with a metallic sheen, in the head section, there are similar spots.

The homeland of the bronze corridors is South America. It is believed that they originate from the island of Trinidad, which is located off the northeastern coast of the mainland. The distribution border stretches all the way to the La Plata basin east of the Andes.

Information about the fishing of golden corridors came from Argentina, Bolivia, Colombia, Peru, Brazil, etc. True, some scientists believe that these may be other, similar species, since the taxonomy of the corridors has not yet been sufficiently developed. The species has geographic morphs, the most famous of which is the Venezuela Orange corridor.

Golden corridors prefer reservoirs with a slow flow or standing. Fish love to spend time on muddy shoals, where they are constantly in search of food.

Keeping a golden catfish at home is not at all difficult. Sometimes these fish are planted alone in the aquarium, but this is wrong. Bronze corridors in nature live in flocks, it is also preferable to keep at least 6 individuals in the aquarium, then they will show themselves in all their glory. One fish should have 10-15 liters of water.

Coarse river sand or small rounded pebbles should be placed at the bottom of the aquarium. Such soil will not damage the antennae located near the mouth of the catfish, because they are fans of digging it up in search of food.

A large number of shelters should be created in the container. They are best made from natural stones, driftwood, grottoes, coconut halves. In an aquarium with golden corridors, it is imperative to plant groups of aquatic plants. Broad-leaved species that form a natural partial shade are well suited: Echinodorus, Cryptocorynes, Anubias. But in general, the choice of plants is not limited by anything, because catfish do not damage them. 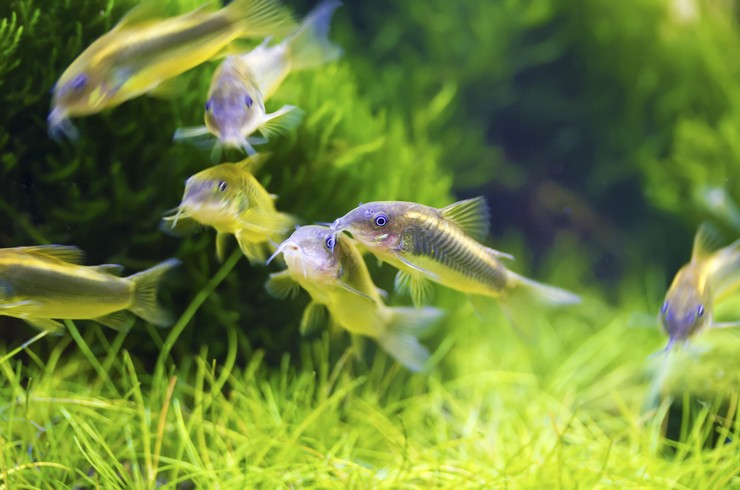 Corridors prefer dim lighting, if the light is too bright, then they usually hide in shelters.

Golden corridors require clean and oxygen-rich water, so a suitable filter and aeration system should be installed in the aquarium. It is very important to change 20% of the water in the aquarium once a week, which will not allow the accumulation of dangerous fish metabolic products. It is dangerous to use water directly from the tap for changes, because it may contain chlorine and heavy metals. Therefore, make it safe by adding the required amount of Tetra AquaSafe Conditioner (5 ml per 10 liters of water). It instantly makes tap water safe for fish.

The golden corridor is an excellent candidate for keeping in a general aquarium. He is peaceful and calm, he will not offend his neighbors. It can be kept with guppies, zebrafish, barbs, tetras, rasbora, gourami, etc.

But a settlement with large aggressive fish is excluded. Here catfish will not protect even a strong shell.

Do not forget that it is necessary to keep the corridors in flocks. Intraspecific conflicts, if they happen, are completely harmless to fish.

Golden corridors are considered “orderlies” of the aquarium. This is due to the fact that the fish eat up any food residues falling from above at the bottom. Without these fidgets, such waste can deteriorate and degrade water quality. But this does not mean at all that the corridors should be fed only with pasture. For good growth, health and longevity, it is important to organize proper nutrition of the corridors. Your best bet is a quality dry bottom fish food such as Tetra Cory ShrimpWafers, Tetra Wafer Mini Mix, or Tetra Tablets TabiMin. They quickly sink to the bottom, which prevents the fish swimming in the water column from eating food (a very common problem in shared aquariums). Due to the special structure, the tablets and plates do not spoil the water and, gradually softening, allow the catfish to eat. It is important that dry food, unlike live and frozen food, cannot become a source of infection in your aquarium.

Since golden corridors are active mainly in the dark, it is recommended to feed them after turning off the lights in the aquarium. 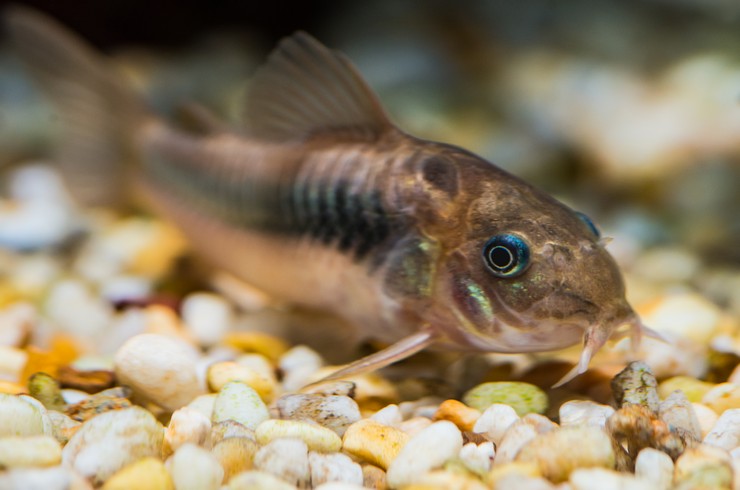