The great African lakes (Tanganyika, Malawi, Victoria), due to their tectonic origin and isolation, have become a real testing ground for speciation. The lack of knowledge of fish in this region often leads to great confusion in the nomenclature, and often to the creation of artificial systematic groups, where the found, but not fully studied species are temporarily placed, which, after a detailed assessment, are transferred to the corresponding genus. The genus Haplochromis is precisely such a group.

Haplochromis is a genus of ray-finned fish from the Tsikhlov family. The composition of this heterogeneous group is regularly reviewed by taxonomists and is constantly changing. But the fish, according to tradition, continue to be called “haplochromines”, even after being excluded from the genus.

All species are endemic to the African Great Lakes. They live in rocky terrain and predominantly lead a predatory lifestyle. They are characterized by increased territoriality. Capable of interbreeding with closely related species to form a variety of hybrid forms, which also complicates the study of the group as a whole. They are not difficult to maintain, but it is necessary to pay increased attention to the design of the aquarium and the selection of roommates.

The color is extremely diverse and depends on the specific species. The most popular are bright blue species (cornflower blue haplochromines), but they are found with rainbow, yellow, red, and almost black colors. There may be transverse stripes or spots on the body. Females are usually more modest than males. During the mating season, the color saturation in males increases many times over. 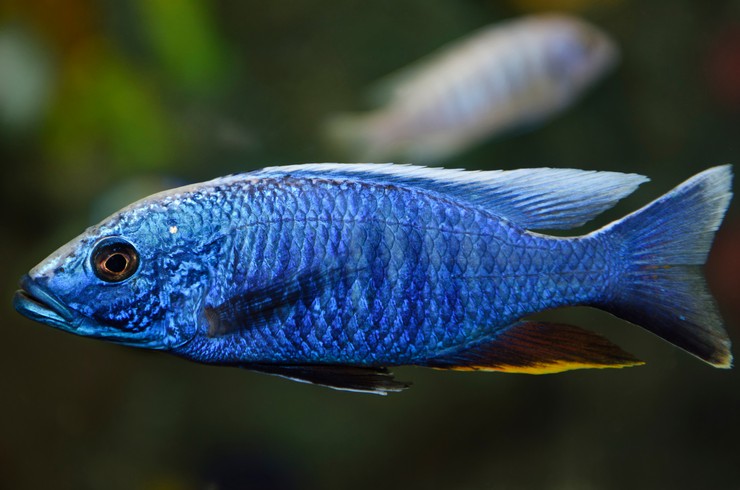 Haplochromis can only be found in the waters of the African Great Lakes. This group of bodies of water was formed as a result of tectonic activity and represents deep cracks in the earth’s crust filled with water. Most of the fish are kept at depths of up to 25 m on the border between the sandy and rocky bottom. The fish are predominantly ambushing predators that prey on other fish, primarily the fry of Mbuna cichlids. They hide in the crevices of the rocks.

It is better to keep haplochromines in pairs or in small harems when there are 3-4 females per male. It is not recommended to plant males together, this can provoke constant fights for territory. The minimum volume for keeping is 200 liters. The aquarium should be equipped with a lid because the fish can easily jump out of the water.

It is better to use sand or very small pebbles as soil. Natural stones will look good in the aquarium, from which multilevel structures will be built. It is necessary to create a large number of shelters where weaker individuals can hide.

It is very important to organize effective filtration and aeration – you need an external filter and a quality compressor.

It is also imperative to change up to 30% of the aquarium water volume weekly. Haplochromis prefer hard and slightly alkaline water.

Keeping with live plants is impractical since in most cases the fish quickly destroy them by digging from the ground or biting off. It is better to use hard-leaved species, such as anubias, and plant plants in pots.

Best kept in a species aquarium. Other haplochromines and some representatives of cichlids of the Mbuna group (labidochromis, labeotropheus) are suitable as neighbors. It is worth remembering that any fish that can fit into the mouth of the haplochromines will most likely be eaten, so cohabitation with small species is excluded. It is not advised to add haplochromines to aulonocars – strikes very often occur. To reduce aggression as much as possible, a large aquarium volume, a sufficient number of hiding places, and an optimal sex composition are recommended. 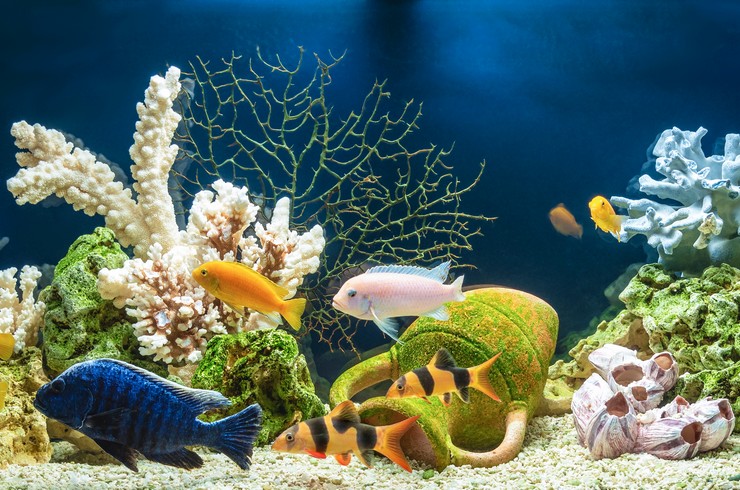 It is best to feed haplochromis with high-quality dry food. This will ensure that the fish receive all the necessary nutrients and vitamins, and the infection or parasites will not enter the aquarium, which can happen when using live food.

The overwhelming majority of haplochromis are carnivores, so they need food with high protein content. It is worth paying attention to the line of German feeds Tetra Cichlid. Formulated with the nutritional needs of cichlids in mind, they are well eaten and absorbed. Depending on the size of the fish, sticks (Tetra Cichlid Sticks), flakes (Tetra Cichlid XL Flakes), or granules (Tetra Cichlid Granules) can be chosen.

It is better to feed haplochromis 2-3 times a day. Hungry fish are more aggressive towards neighbors.

Breeding haplochromis is a relatively simple process. In a species aquarium, it can occur even without the help of the aquarist. On average, spawning occurs every two months (this is especially typical for the summer period). The stimulus can be a daily change of 10% of the water in the aquarium and an increase in temperature to 20 ° C. The male makes a nest, as a rule, near a large stone and invites the female there. After fertilization, the female collects eggs in her mouth, where she incubates for 2-3 weeks. Fertility can be up to 70 eggs. 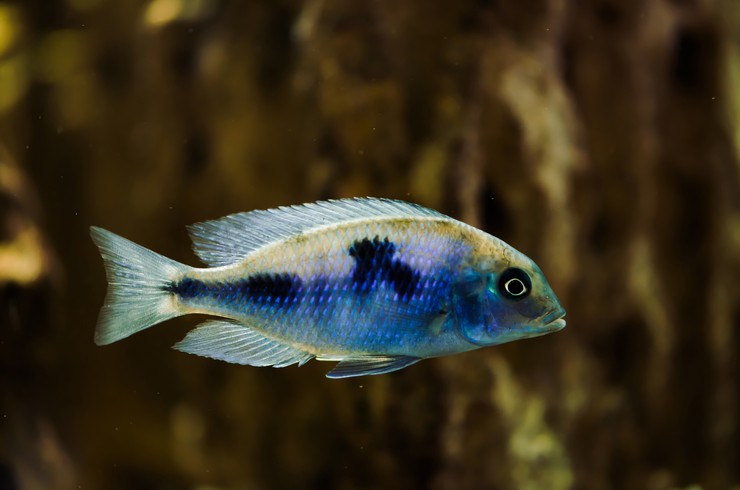 To ensure that the maximum number of fry survives, it is recommended to place the female in a separate spawning aquarium (at least 80 liters) until the female releases the fry. After that, it can be planted.

Sexual maturity in haplochromis occurs at the age of about a year.