Dogs differ not only in their breed, size, or coat color. The four-legged friends have different temperaments and behaviors. While one of the dogs is sleeping through New Year’s Eve in its basket, you may find yourself facing a trembling bundle of nerves. But there are a few things you can come up with to ease anxious dogs through the most stressful night of the year.

This is How Your Dog Survives New Year’s Eve 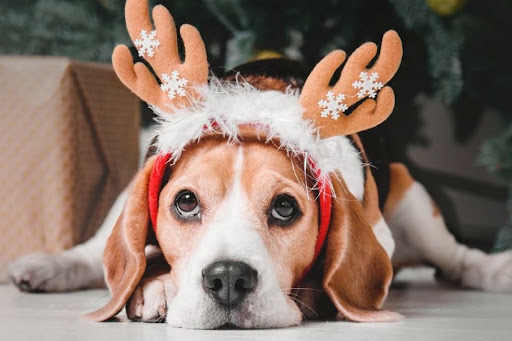 As the owner of a dog that shows strong symptoms of anxiety on New Year’s Eve, you may have had thoughts of fleeing: just look for the distance over the turn of the year and thus do not expose your four-legged friend to the stress of the fireworks in the first place. A firecracker-free New Year’s Eve with a dog, that sounds relaxed! But implementing such plans is difficult. Not only that winter is a popular holiday season and the prices for holiday accommodation are correspondingly high. The whole of Europe is celebrating New Year’s Eve and the bang can be perceived by the sensitive dog’s ear even from great distances.

Apart from that, in many places, there is roaring before and after New Year’s Eve. Even on New Year’s Eve holidays with your dog, for example in holiday homes in a secluded location or even in the shelter of the historic old towns, you can hardly prevent your four-legged friend from hearing such detonations and the noises from outside.

As an alternative to fleeing, many dog owners of panicky dogs choose desensitization. Instead of avoiding the scary situation, expose your four-legged friends to it in order to get them used to it. Such measures are difficult because fear is a natural instinct for survival and actually has a positive effect. The dog avoids scary situations because he wants to protect his life.

The process of convincing your four-legged friend that loud noises are not life-threatening is therefore lengthy and requires a sensitive approach. Do not try to do it yourself, but seek the help of an experienced dog trainer.

Against Fear: Tranquilizers From the Pharmacy

In some cases, dog experts advise giving the animal a sedative to ease the fear of New Year’s Eve. In the pharmacy, you will find homeopathic remedies such as Bach flowers, globules, or valerian, which have a calming effect. However, do not give this medication without first consulting your veterinarian. This adjusts the dose according to your four-legged friend’s needs. Under no circumstances should you resort to anesthetics. Sedation prevents your dog from reacting physically, but it experiences New Year’s Eve in full psychologically. The fear can thus even be increased.

Do Not Walk Without a Leash on New Year’s Eve

Carefully plan out walks with your dog around New Year’s Eve. Do it at times when it’s quiet outside and no longer around dark. Since you can’t prevent it from banging, be sure to keep your dog on a leash. You can really work it out before New Year’s Eve on a tow line. In a sleepy mood, he does not perceive what is happening outside as intensely.

A large chewing bone or a Kong filled with goat cheese: Eating triggers happiness hormones in your four-legged friend. Because of the distraction, he forgets the background noise in front of the house. Shortly before midnight, the best way to distract your animal is with a large treat.

The flashes of light from the fireworks worry your dog. The best thing to do is to darken the room in which he spends New Year’s Eve. Allow your pet to take shelter in a specific place. Some dogs choose the bathtub in the bathroom, the laundry room, or a dog crate as a place of retreat.

Eggnog for Dogs – a Good Idea?

It is not uncommon for dog owners to hear the idea of giving their stressed dog a little eggnog on New Year’s Eve. Because masters and mistresses also know: alcohol relaxes you. Even dog professional Martin Rütter is positive about the idea, whereas veterinarians like to clap their hands over their heads. You have to decide for yourself whether you want to give your dog alcohol in this exceptional case. The dosage is of course important! Be sure to ask your vet for advice beforehand.

Bottom Line: Don’t Try to Calm Your Dog Down

Nobody likes to see their fur nose frightened. Still, refrain from feeling sorry for your dog if he panics. This confirms his fear and aggravates the symptoms. Unfortunately, there is no universal solution to the problem. Incidentally, it can also be helpful to bring him together with another confident and fearless dog in difficult times for him.