Whether on Halloween at the end of October or during the fifth season: dogs in costumes may look cute and funny, but they don’t really enjoy being dressed up themselves. Pettime explains why.

Contents hide
1 Dog Costumes
2 Dogs Feel Uncomfortable in Disguise
2.1 Avoid full-body costumes for dogs
2.2 Why the fur nose feels uncomfortable in a costume
3 The Ability to Communicate and Interact Suffers
3.1 The dog no longer takes part directly in the action
3.2 The sense organs are impaired
3.3 The body language only works to a limited extent
4 Stay Away From Make-up and the Like..
5 Let Minimalism Prevail 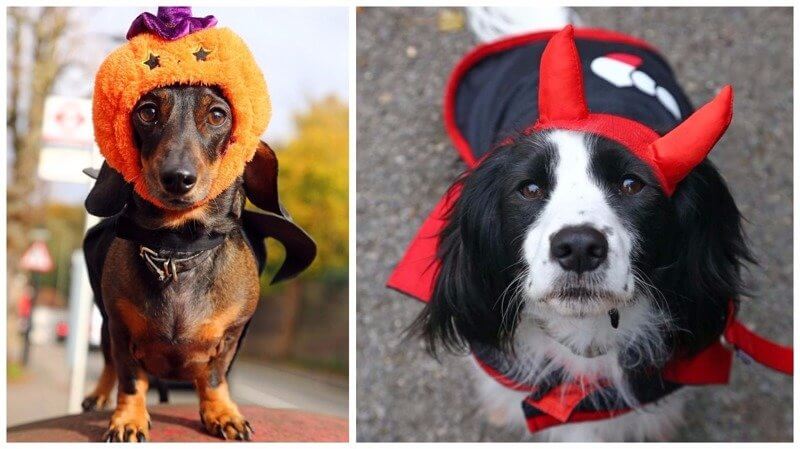 Cute dog costumes are currently more popular than ever. Disguised animals are a real hit, especially in social networks. But what looks cute and funny at first glance is one-sided fun at second glance: the dog does not enjoy the disguise.

Full body costumes are currently very popular. The four-legged friend turns into a saber-wielding pirate, Darth Vader or Dracula, for example. Most of the time, however, the disguise is extremely uncomfortable for the animal. After all, the dog doesn’t know what is happening to him. He doesn’t understand why he’s suddenly the center of interest. In addition, the costumes are usually uncomfortable and restrictive.

Why the fur nose feels uncomfortable in a costume

Every dog expresses its discomfort in a different way. While some animals are particularly excited, others tend to withdraw and become calm. Still, others are irritable and try to destroy the disguise. The following behaviors indicate that the dog is uncomfortable in its costume:

The Ability to Communicate and Interact Suffers

Costumes are also unsuitable because the dog can no longer orientate itself properly in the world. There are several reasons for this.

The dog no longer takes part directly in the action

The animal companion is primarily concerned with himself. It is an entirely unnatural condition for him. Normally the four-legged friends devote themselves completely to the environment and live “completely at the moment”. They sniff, rummage, play, observe the environment, etc. However, if the animal wears a costume, it is completely confused because it cannot do anything with it. It feels uncomfortable and can therefore no longer participate directly in its immediate environment.

The sense organs are impaired

Costumes and accessories can also negatively affect the sensory organs. For example, the ears are partially covered by fabric so that the animal can no longer hear well. Sunglasses or eye patches in pirate costumes impair vision.

The body language only works to a limited extent

Another aspect should not be underestimated by the dog owner: An animal in disguise is immensely limited in terms of the ability to communicate and interact with conspecifics. Body language is one of the primary means of communication in the dog world. However, freedom of movement is severely restricted by cladding. The dog can no longer communicate properly to its environment and its fellow dogs. This can lead to serious misunderstandings among animals – but above all to insecurity among the costumed dog.

Dog owners should definitely refrain from decorating their four-legged friends with make-up or fur dye. The products move in a legal gray area. Most of them are suspected of harming the animal.

You don’t want to miss out on celebrating Carnival with your dog? Then, as a compromise, choose a costume that does not affect the dog as much as possible. Anything that does not disturb the animal is allowed. Individual accessories are particularly suitable for this.

For example, you can tie a larger bow around the neck of your four-legged friend. Since he is used to wearing a collar anyway, the difference will soon no longer bother him. Another option is to add an ornament to the dishes. How about helicopter rotors or wings? Make sure, however, that the accessories are as light as possible and fit well. In this way, the animal’s well-being is impaired as little as possible.

Ideally, you should just give your animal friend a break. Give it to good acquaintances, friends, or even to the dog sitter, and celebrate the great days with other two-legged friends! In this way, masters and dogs get through the fifth season in a species-appropriate manner.