The name Irish Wolfhound alone inspires respect and fear, which further reinforces the dog’s impressive size and formidable appearance. But do not jump to conclusions, the Irish Wolfhound is a kind and affectionate giant. 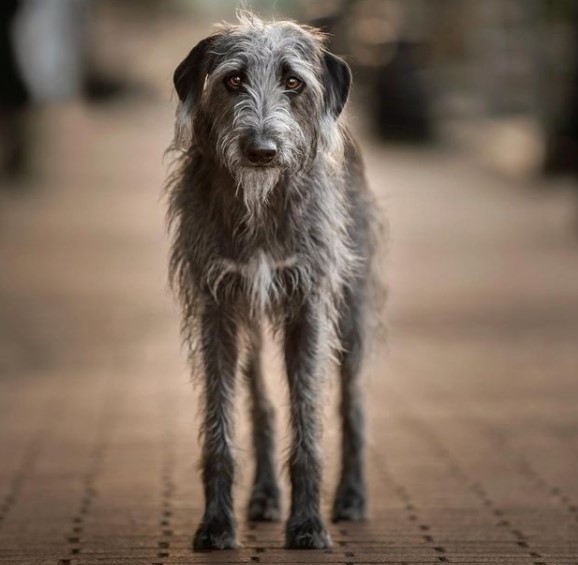 The ancestors of the Irish supposedly came to the British Isles with the Celts more than 2,000 years ago. The history of the country and the breed are inextricably linked with each other. There is information that the Romans took out huge bearded dogs from Ireland, so they liked them. In the annals of the priest Edmund Hogan, Irish dogs are described, which were used for hunting large game. Also mentioned is the “Big Hunt” of 1561, when about 200 Wolfhounds were released into a herd of deer.

Sometimes Irish Wolfhounds were sent as gifts to rulers of other countries. So in 1641, Cardinal Richelieu of France received a similar gift, and in 1646 the dog was sent to the Duke of Tuscany in Italy. In the 16th-17th centuries, dogs were actively sold to England and other countries, until in 1652 Cromwell banned the export of the national breed. At the end of the 18th century, there were no Wolfhounds left in the British Isles. The legendary breed was on the verge of extinction.

Captain Georg Agustus Graham played an important role in the history of the Irish Wolfhound. In 1885 he organized a club of breed lovers and began its revival. The captain added the blood of the Deerhound, Russian Hounds, and Great Danes. As a result, he received the necessary type, which was preserved in every generation. In 1879, the Kennel Club of Ireland established a separate class for Wolfhounds.

The Irish Wolfhound has become a living symbol of the country. His image is engraved on a silver sixpence coin and is found on postage stamps, porcelain, and also on the emblem of Tullamore Dew whiskey. Since 1908, only Irish Wolfhounds have traditionally served in the Cloverleaf Irish Guard. 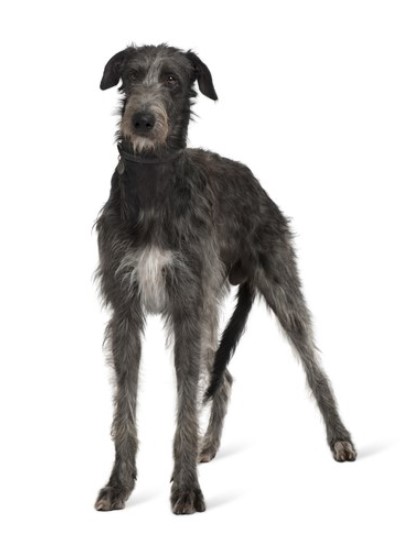 Outwardly, the Irish Wolfhound is not as strong and heavy as the Great Dane, but at the same time, it does not differ in the grace and dryness that is inherent in other Hounds. This is a dog of huge size and strong constitution with well-developed muscles, free, energetic movements, and a head held high. Minimum height at the withers: 79 cm for males and 70 cm for females; weight – 54 kg and 41 kg, respectively.

The head is carried high, straight, and long. There is a small hollow between the eyes. The muzzle is moderately narrowed and long. The eyes are dark. The ears are small, pinkish. Teeth complete with scissor bite, but straight teeth are also allowed. The neck is well extended. No loose skin or dewlap. The body is well developed, elongated. The back is straight and wide. The loin is slightly arched. The chest is wide and deep. The belly is tucked up. The tail is slightly curved, long. The limbs are high, straight, and strong. The toes are well tied. The coat is wiry: harsh and rough to the touch, especially above the eyes and on the lower jaw. Colors: red, gray, white, black, yellowish-brown, brindle. 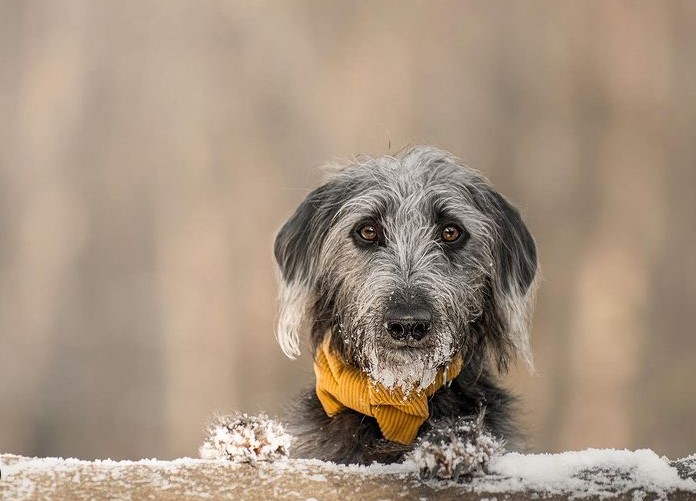 The Irish Wolfhound is a kind and affectionate giant. Behind his harsh appearance, there is a soft, docile nature. These dogs are very friendly and loving, calm and balanced. There is no aggression or tendency to conflict in their temperament. Only an aggressive attack in his direction or in the direction of the owners can make a Wolfhound lose his temper all the serenity can instantly dissolve. Having scared off the ill-wisher, the dog will immediately return to a good mood. The Irish are devoid of unnecessary ambitions, they are not jealous, but they can be stubborn, very independent, and self-sufficient, they know their own worth. They grow up late, fully-formed physically and psychologically by the age of 2-3.

Wolfhounds get along with children of any age. Get along well with other animals. Smaller dogs and cats can be chased while walking, which can cause problems. The attitude towards strangers is neutral, indifferent, or friendly.

In training, this breed, a firm but the fair hand is needed. Everything needs to be achieved very calmly, Wolfhounds cannot stand screaming, tugging, and assault. Young dogs feel insecure in an unfamiliar environment, they are wary of anything unfamiliar and take a long time to get used to. The Irish Wolfhound is distinguished by high intelligence, it is easy to learn, but does not like monotony and long repetitions. Before working out the command, the dog must be interested, otherwise, all efforts will be in vain. 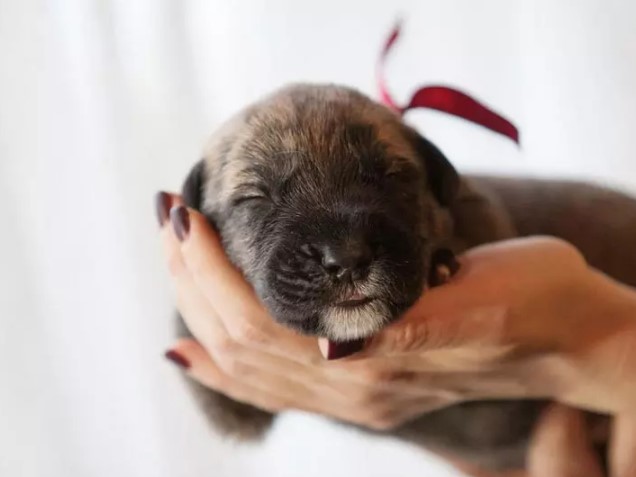 The Irish Wolfhound adapts to any conditions of life, whether it be a private house with a huge territory or a city apartment. The huge Wolfhound is surprisingly compact and unobtrusive, there is no fuss and unnecessary activity in it. Nevertheless, in the city it will be difficult with him, people shy away from the size in horror and leave with their small pets, there will be no one to play and communicate with.

Dog care is simple. The coarse coat is brushed regularly to maintain a neat appearance. It is often not recommended to bathe a Wolfhound. Complete washing with shampoo is indicated 2-3 times a year. Regularly, the dog needs to wipe his eyes and clean his ears. The hair inside the auricle can be plucked out so that it does not contribute to the accumulation of sulfur and dirt. If the dog eats naturally, care must be taken to clean the coat around the mouth. 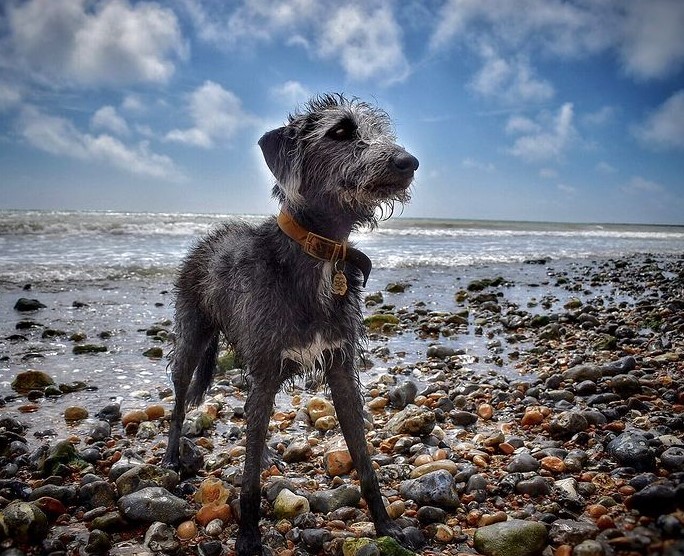 There is a whole list of diseases that Irish Wolfhounds are most prone to:

Many other diseases can be caused by improper diet and maintenance, lack of necessary physical activity. Without fail, dogs must undergo routine vaccination, as well as a treatment against external and internal parasites. The average life expectancy is 10-12 years.