In this article, we are talking about leash aggression in dogs.

What is Leash Aggression in Dogs? 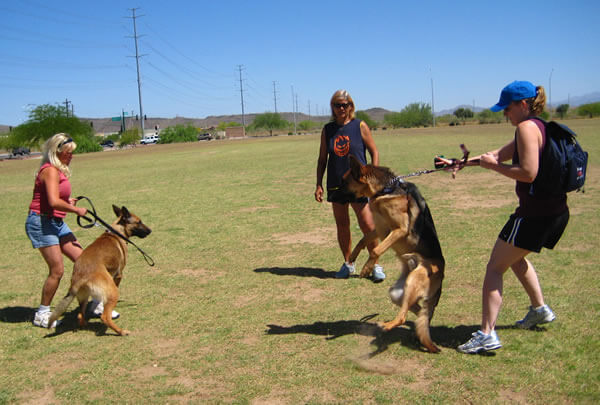 Leash aggression in dogs describes aggressive behavior when sighting a conspecific. The rowdy four-legged friend jumps on the leash and gives a loud, threatening bark. The line aggression is differentiated from a general intolerance. Because in the free run, the four-legged friend, who is often labeled a bully, shows himself to be sociable and relaxed.

But why is a leash crucial for behavior? It’s simple: although dog accessories are indispensable in everyday life, they limit communication. Some dogs see an aggressive reaction as the only way out.

Aggression is a natural behavior in every dog. However, what is meant here is a reaction that is beyond what is tolerable and which means pure stress for both dog and person.

Consistent training is required to ensure that walks on a leash are relaxed again. Not dealing with the topic or glossing over the problem is fatal with leash aggression. Over time, the reaction becomes ritualized, in other words: the dog sounds the alarm out of habit. Plus: Out of ignorance, dog owners often even send signals that encourage the leash Rambo in their behavior. The first challenge in training is to determine the cause of the aggressive behavior.

A bullying dog wants to make a difference through its reaction. But what exactly turns an otherwise peace-loving four-legged friend into a bully?

An often underestimated topic is the dog’s tolerance for frustration. If the dog always gets his way through, he is not used to enduring frustration. A dog leash is a disruptive factor in impatient dogs. If the four-legged friend sees a conspecific and wants to contact him directly, the leash prevents him from doing so. Frustration in the form of loud barking is almost inevitable.

During the puppy phase, the growing four-legged friends learn the dog language. Longer isolation (e.g. due to illness or placement with a dubious dog breeder) eliminates this crucial phase. The result: Affected four-legged friends do not interpret even the basics of body language correctly and react with uncertainty.

Insecurity on the part of the dog owner

The hasty crossing of the street, a nervous voice, or hectic movements: If a dog owner shows uncertainty or even fear while seeing another four-legged friend, this emotion is transferred to the dog on a leash. After all, a person’s best friend quickly registers when their caregiver is not in control of the situation. As a logical consequence, he now tries to bring the danger under control even with loud barking.

It happens that dogs show leash aggression only in areas that they consider to be their territory. Typical examples are the path right in front of the front door and the park near the place of residence. The danger with this territorial line aggression is that the area often spreads. Little by little the dog defends more walking routes, even if he has only been there for a few minutes.

Attack is the best defense

Sensitive dogs have a bad experience on a leash with a conspecific to chew for a long time. Some respond to subsequent encounters with submission, while others react with threatening gestures. The dog owner is not always aware of such a negative experience. Because in addition to a serious injury, it can also be a slight knocking over or something similar. What is fundamentally true: There was a moment in the past when your own dog felt unsafe and received no protection from its human.

After puppy age comes a time when a dog is full of energy. One way of getting rid of this liveliness is to behave aggressively on a leash. In addition, dog owners have not yet established their boundaries and the “teenager” tries to test them out through rowdy behavior.

Dog owners should tackle leash aggression as early as possible. An end to aggressive behavior is not only a great relief for people. It also means a break for the affected dog, as he no longer has to worry about the course of the encounters himself. Because there are different causes of leash aggression, the approach to training differs from dog to dog. In addition, not every dog can be motivated by the same means. There is therefore no magic formula for this complex topic, rather the following applies: Each training must be individually tailored to the dog. The following tips can play a role in toning down.

If the four-legged friend wins the dog walk, he also decides on the procedure for dog encounters. A good leash is one of the basics of dog training. Because this is not just about relaxed walking on a leash, but about the relationship between dog and human. During training, the dog learns to orient itself towards its people and is given security and guidance through it.

When a dog ruffles, it has never helped to respond with loud ranting in the same way. The insecure four-legged friend perceives this as a kind of reinforcement of his human being. As a result, he will not stop barking but will roar in competition with his human. However, keeping calm is not enough to train off-the-line aggression. Rather, it should be viewed as the basis for training.

From a dog’s point of view, it is “impolite” when a stranger rushes towards him head-on. In the free run, socially acceptable dogs usually avoid a conspecific in order to convey their peace-loving intentions. Dog owners achieve a defuse intense encounters on a leash by holding their four-legged friend on the other side of the strange dog and walking past him in a semicircle.

For some dogs, an alternative to rabble-rousing works wonders. A food dummy is suitable for playful or greedy dogs. In addition, a seat command is often used at the side of the path or directly behind the person. All the alternatives mentioned giving the insecure four-legged friend a task in this precarious situation. He knows how to behave when a dog encounters a leash and is rewarded for it.

Switch on the dog trainer

Taking the subject of leash aggression into your own hands requires a lot of expertise in the dog’s body language. It is just as important to have a feeling for the perfect timing and the ability to critically question your own behavior. Before the wrong approaches are pursued and the results fail, the professional advice of a dog trainer should be sought. This neutrally observes the behavior of the dog-human team. Based on this, the dog expert creates a training concept and accompanies the team on the way to relaxed walks on a leash.