Many dog breeders, especially beginners, find long-haired German Shepherds more attractive than their short-haired counterparts. Indeed, dogs look impressive, but you need to understand that to maintain a chic look, you need to devote time to the pet and take care of the coat every day.

The appearance of the dogs is admirable, but apart from the long hair, they are no different from the short-haired dogs. All German Shepherds are intelligent, loyal, and loving animals.

It is noteworthy that such dogs were not recognized for a long time by the majority of breeders and breeders. Long hair was considered a defect, due to the fact that it is not resistant to adverse weather conditions, gets wet quickly, and dries for a long time. Dogs caught in the water lose their buoyancy. In addition, the lack of undercoat also became the reason for the ban on breeding such dogs. Only in 2010, the FCI recognized long-haired dogs and this gave them the right to participate in exhibitions and breeding. Changes have been made to the Breed Standard, based on which dogs are judged at shows but in a ring separate from short-haired animals. The Long-haired German Shepherd is a species of German Shepherd and not a separate breed as many believe.

Representatives of the breed are suitable for keeping outdoors. They can live outdoors in winter without freezing, and they tolerate the heat in summer perfectly. Keeping in an apartment requires regular care of the animal, especially during the molting period, when the shepherd loses its coat and undercoat in large quantities. 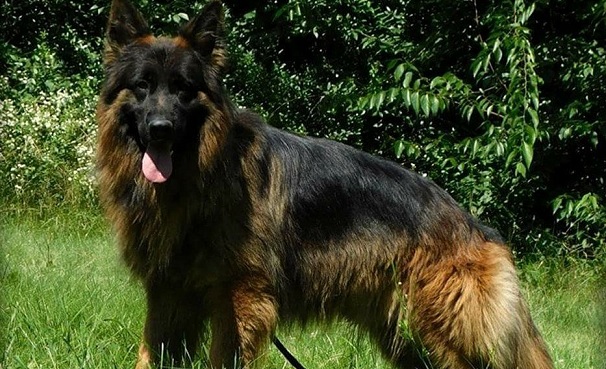 At 10 weeks old, puppies are very fluffy, but after molting at 14-16 weeks, they are difficult to distinguish from their short-haired counterparts. Their species can only be determined by tufts of long hair in the ears and between the fingers. But it will be difficult for a non-specialist to determine this. Long hair begins to grow only by the age of one year.

Long-haired German Shepherds with undercoat have long, straight, and stiff guard hair. The undercoat is always pronounced, but not always dense. The tail is fluffy with a suspension below. Feathers on the ears and limbs, especially on the thighs. On the head, the inner surface of the ears, the front surface of the limbs, the paws, the hair is short. Allowed for breeding.

In shepherd dogs without an undercoat, the topcoat is soft, long, and not tight-fitting. Long hair is present on the ears, limbs, forming tufts. On the tail, the hair is long and soft with a feather. There is a parting on the back. Such dogs cannot participate in breeding.