Miniature Schnauzers, like other female dogs, become ready for procreation several times a year. The fact that this period has come will be indicated by the estrus that has begun in the female. We will learn about the features of its course, duration, and cyclicality from the next article.

Contents hide
1 Miniature Schnauzers: Characteristics of Estrus
1.1 How Does it Begin?
1.2 How Long Does it Take?
2 How to Care for a Dog During Estrus? 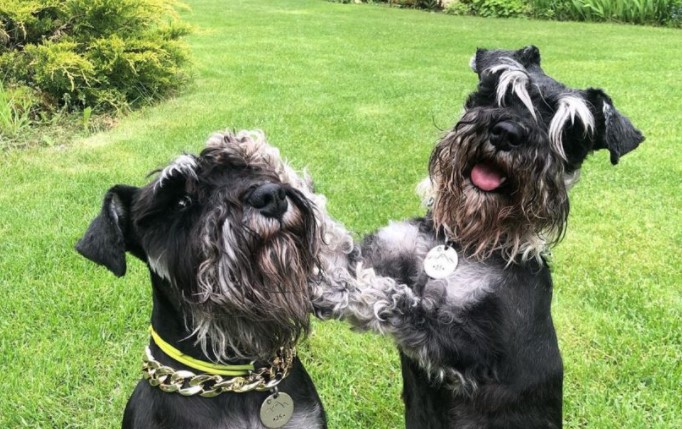 The first heat should happen before the four-legged pet is one year old. Females who already had the first heat are allowed to breed. Better to be in the second or third heat.

How Does it Begin?

The fact that the cycle will begin soon can be understood by the following signs:

Other behaviors. A female that was previously tender and affectionate can become irritable and even aggressive somewhere. Some, on the contrary, follow on the heels of the owner and constantly demand affection.

Appetite. In some dogs, it disappears, in others, it becomes much stronger. Reactions to other dogs. Before estrus, minnows usually show aggression towards everyone, but they do not like females more than males.

Frequent urination. The girl begins to ask for the toilet much more often. There may be bloody impurities in the urine.

Reaction to touch. If you touch the back of a dog, which will soon begin to estrus, then it will move its tail to the side and freeze in place.

It is better not to let the dog off the leash either before the onset of estrus or during the period of its activity. She must be protected from other dogs, walk in a not crowded place.

How Long Does it Take?

For representatives of this breed, the process usually takes 20 to 30 days. Heat consists of three distinct stages:

Proestrus. Lasts up to 10 days. During it, the external genital organs can swell, bloody discharge begins to appear from them. The female becomes agitated and shows interest in males. However, during this period, she will not allow anyone to approach her.

Estrus. During this period, the egg is released from the ovary. Estrus lasts about 7-9 days. The female is no longer aggressive towards males, she can go for mating.

Metoestrus. The discharge usually ends. The hormonal background returns to normal, the dog begins to behave as usual. Interest in males disappears. If pregnancy has begun, this will become noticeable after a few weeks.

The break between cycles lasts from 4 to 7 months. If any malfunctions occur, this can be regarded as a signal of the presence of diseases of the reproductive system.

Important! Females are brought in for mating in the period from 9 to 17 days of estrus. Sometimes it is repeated to consolidate the result.

How to Care for a Dog During Estrus?

To make this period more hygienic, you can use special panties for dogs. They can be disposable or washable. You do not need to put them on all the time, the dog must learn to take care of itself at this time.

If the period of readiness for pregnancy fell in the winter, then walks should be shortened. On the street, you should keep your pet on a short leash and keep other dogs away from it. And also veterinarians are advised to abandon exhibitions and competitions.

If the miniature schnauzer is already one and a half years old, and still not in heat, the dog needs to be shown to the veterinarian. The specialist will be able to find out the causes of the problem.