Besides Laika, the first dog in space, the dogs of the Russian Nobel Prize winner Ivan Pavlov are among the most famous dogs in research. We explain what the famous Pavlov experiment and its significance for science and our everyday lives are all about.

Contents hide
1 Pavlov Dogs: Test
2 The Pavlovian Reflex in the Experiment
3 What Do We Know About Pavlov’s Dogs?
4 The Pavlov Dog and the Placebo Effect
5 Classical Conditioning – What Does It Mean in Everyday Life?
6 Conditioning in Dog Training

The experiment around the Pavlovian dog was devised and carried out by the namesake Ivan Pavlov (1849-1936). In fact, there was no “one”, but dozens of “Pavlovian dogs”. Pavlov won the Nobel Prize in 1904 for his findings on digestive processes. Dogs were used as laboratory animals for his research. By chance, the physiologist noticed something about the dog kennels that inspired him to conduct another experiment. It was known that dogs develop a greater flow of saliva when they eat – they start to drool. But Pavlov noticed that the dogs developed a greater flow of saliva when his employees approached their cages. The dogs combined the approaching footsteps with feeding. This gave him the idea for his world-famous experiment.

The Pavlovian Reflex in the Experiment 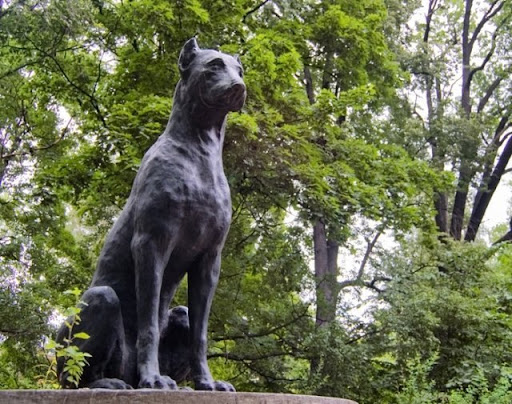 First Pavlov rang a bell in front of the dogs. The unknown noise did not trigger salivation – it had no meaning for the four-legged friends. Then he let the bell ring for a few days in parallel with the feeding.

After a short time, the sound of the bell was enough to stimulate the flow of saliva.

The dog’s brain had linked the two stimuli “bell” and “food” with one another. The bell tone was no longer neutral but triggered a conditioned reflex. The animals can no longer control this. This observation based on the stimulus-response scheme is summarized in behavioral research today as “classic conditioning”.

What Do We Know About Pavlov’s Dogs?

Pavlov’s dogs may have been famous – it didn’t help them. Like most animals used for animal experiments, they suffered from the experiments. For his digestive experiments, he surgically removed parts of the digestive organs from test dogs and observed how this worked. An excruciating procedure for the four-legged friends who died after a short time. For the experiments relating to conditioning, Pavlov had the dogs implanted saliva collection containers in an operation. In addition, Pavlov not only used the famous “bell” as an external stimulus for his behavioral studies. He tested many stimuli. This included various sounds such as whistles or metronomes, but also electric shocks.

For example, he used painful electric shocks in combination with a specific sound stimulus.

After a few repetitions, the tone was sufficient to cause the dog visible pain. Further studies of involuntary reactions to stress and pain in dogs have also contributed to the fact that the Pavlovich dogs had to go through a lot of suffering. The philosopher Peter Sloterdijk even describes Pavlov at the time as “one of the greatest animal torments in human history.”

The Pavlov Dog and the Placebo Effect

Another groundbreaking observation was made by Pavlov in 1927. In one series of experiments, a four-legged friend was regularly injected with morphine, after which the dog vomited. Pavlov notes that the four-legged friend also vomited if he only received a saline solution via injection. Since saline solutions do not trigger any physical reactions, this observation forms the starting point for modern placebo research.

Classical Conditioning – What Does It Mean in Everyday Life?

Pavlov and his followers soon transferred all actions of humans and animals to classical conditioning and the stimulus-response scheme. The associated philosophical current is called behaviorism. Free will does not fit this concept. By the 1970s at the latest, behavioral researchers and philosophers concentrated increasingly on cognitivism, which gives more space to individual thought processes. Nevertheless, classical conditioning continues to occupy an important position in today’s behavioral research and around learning theories. Findings based on Pavlov’s dog experiments are helpful, for example, to treat phobias in humans. Common methods include desensitization or counter conditioning.

Today we can make use of Pavlov’s findings in dog training. Here, too, we use the classic stimulus-response scheme, but there is usually a difference.

Dog training is primarily about instrumental or operant conditioning, which we also call “learning from success”.

How can we tell the difference? Suppose we reward the dog with food whenever it comes to us on the command “come”. At some point, he will “come” and link the food together, and even without the sight of treats he will rush to us when we call “come”. But many dogs only do this when they have nothing more interesting in mind. Some dog owners see their companion inwardly weighing up: Is it worth answering the call or should I keep digging in the mousehole? If the dog can weigh up, it is operant conditioning.

If the dog were classically conditioned, he would no longer have any freedom of choice.

“Come” can also be conditioned in a classic way. To do this, however, the dog has to link the signal to a reward such as food around 7,000 times before the owner uses it as a command for the first time. Whether classic or instrumental: the stimulus-response scheme helps in many cases. For example, in relaxed encounters with fellow dogs. If a dog that tends to yap consistently receives a treat when it sees a conspecific approaching it, it learns: “Other dogs mean, I get something tasty!” Through this counter-conditioning, it connects the encounter with something positive.