Everyone has heard the proverb “dumb like a fish.” But, as practice shows, certain types of fish are even very “talkative” and are capable of producing a wide variety of sounds. The group of Bronyakov catfish, which are often called “singing catfish”, is especially famous for this. And why they got this name, you can find out from our article.

Platidoras (Platydoras armatures) is a freshwater fish from the Armored catfish family. The first scientific descriptions date back to 1840, with the fish being named Platydoras costatus. But in 2008, scientists revised the systematic position of the fish and isolated it as a separate species.

The genus name consists of two Greek words: “platys” – flat, wide and “doras” – carapace, which indicates the serious protection that nature has given the catfish: strong skin, developed occipital shield, and bony outgrowths along the lateral line with spiny bony scutes.

Platidoras are not picky about the conditions of keeping and are good orderlies of the aquarium, eating up the remains of food falling to the bottom.

An interesting feature of these catfish is the ability to make sounds. They can do this in two ways: by rubbing the pectoral fins against the grooves in the shoulder joints (a chirping sound is obtained) and by rapid contraction and relaxation of the muscle attached on one side to the skull, and on the other to the swim bladder. Due to such a “spring” sounds similar to a drum beat are obtained.

Catfish make sounds when they meet other individuals or when they are frightened. They can be heard if they are caught from the aquarium or even by simply listening (it is advisable to do this after turning off the light).

Long spines on the body and fins can easily rip the net, so be careful when catching catfish.

Often, young Platidoras can be found in the company of larger predatory fish, for which they act as “cleaners”, eating parasites and dead scales on the body, although this behavior is more typical for marine fish than for freshwater ones. In adult catfish, such a desire to help a neighbor is not observed.

Platidoras are predominantly nocturnal and like to bury themselves in soft ground.

Platidoras have a dense, arrow-shaped (when viewed from above) body. In aquariums, the size of the fish usually does not exceed 15 cm, although natural individuals can grow up to 24 cm. On the head are large eyes and a large mouth, surrounded by three pairs of sensitive whiskers: two on the lower jaw and one on the upper. Sharp bony plates are located along the lateral line, creating a reliable “shell” for protection from enemies. Fins are also involved in defense. The dorsal and pectoral fins are distinguished by enlarged first rays, which are covered with small but very sharp notches. They can easily break the net and even injure a person, so catching the catfish must be extremely careful.

Body-color is dark brown or black. On the sides of the body are white or yellowish stripes starting at the tail and connecting on the head. The abdomen and margin of the pectoral fins are light. The dorsal fin also has a small white border. Thus, a pattern of alternating dark and light stripes is obtained, especially bright in young individuals. With age, the pattern becomes less distinct. 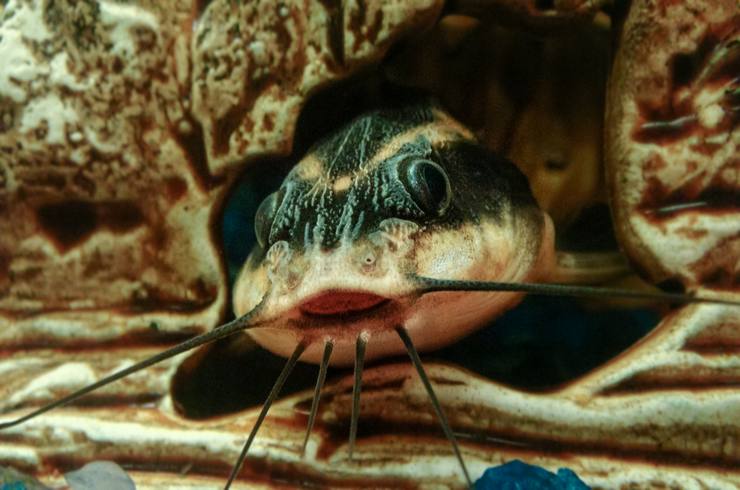 Catfish platydoras are widespread in South America. They can be found in Colombia, Venezuela, Brazil, Peru, Bolivia.

Fish prefer slow-flowing and stagnant bodies of water, where they arrange shelter among flooded roots and thickets of aquatic plants. They prefer sandy soil so that in case of danger you can bury yourself in it. During the rainy season, they migrate to flooded forests, where it is easier to find food. Fish are territorial, but to protect themselves from predators in nature, they gather in schools.

For a comfortable keeping of 1-2 Platidoras, an aquarium with a volume of 100 liters or more is recommended. You can have both one catfish and a group. In the latter case, skirmishes between males are possible, which, however, do not lead to serious consequences.

Particular attention should be paid to the ground and decorations. It is best to add sand or small rounded pebbles to the bottom of the aquarium. Catfish are very fond of digging up the soil in search of food. A large number of different hiding places should be provided in the aquarium. These can be grottoes, ceramic pipes of a suitable size, side-laid flower pots (ceramic), plastic, and natural driftwood. During daylight hours, catfish usually hide, and at night they begin to explore the bottom of the aquarium for food. 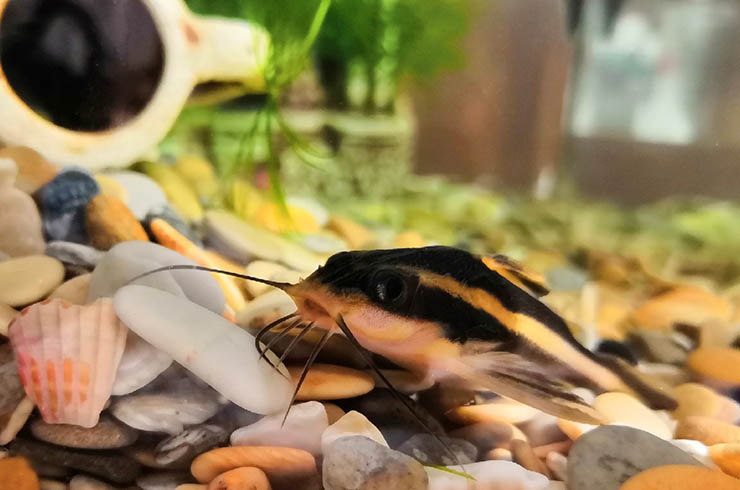 Platidoras are rather secretive and shy fish, therefore it is recommended to dim the lighting during the day, for example, with the help of floating plants. To observe your pets at night, during peak activity, it is recommended to use a special blue night illumination.

Platidoras catfish prefer clean water saturated with oxygen, so you need to take care of effective filtration and aeration. Do not create a strong current, in nature, fish prefer stagnant water. You will also need a thermostat because catfish are quite thermophilic.

Live plants can be used in Platidoras aquariums as the catfish do not bite at them. But given their love of digging the ground, it is better to fence off the roots of plants with stones or use species with a powerful root system – Cryptocorynes, Echinodorus.

Maintenance of the aquarium is standard – regular water changes (20% once a week), soil siphon, filter cleaning.

Platydoras are peace-loving fish. However, given their size, it is strongly discouraged to settle catfish with small species, because after the night you may miss some fish. Therefore, it is better to select fish in neighbors that cannot fit the catfish in the mouth: medium characin, carp, gourami, swordtails, mollies, ancistrus, torakatum.

Reinforced body armor allows you to keep Platidoras even with large predatory fish, for example, South and Central American cichlids.

In nature, Platidoras feed on various benthic invertebrates and some algae.

Catfish are omnivorous and unassuming in food. Good quality dry food for bottom fish is best suited for feeding. The use of live and frozen food carries the risk of contamination of the aquarium, and their imbalance and lack of vitamins will prevent the fish from developing properly.

Platidoras feed exclusively on the bottom of the aquarium, so it is advisable to choose food for them that quickly sink. A good choice would be Tetra’s bottom fish tablets: Tetra Tablets TabiMin, Tetra Wafer Mix, Tetra Pleco Spirulina Wafers. This is a completely balanced food that will satisfy all the nutritional needs of Platidoras. Thanks to a special formula, the tablets retain their shape for a long time, remaining available for catfish.

It is best to feed your fish after turning off the lights. Platidoras are prone to overeating, so keep track of the amount of food you give and keep in mind that these “orderlies” of the bottom eat not only their own food but also all the remains after feeding other fish. If you find a strongly convex belly in a Platydorus, then most likely this is a consequence of overeating. In this case, it is better not to feed the fish for several days.

Unfortunately, the natural process of breeding Platidoras catfish is still poorly understood. There are only a few reliable cases of spontaneous spawning in aquariums. Most of the fish are supplied for sale from special fish farms where Platidoras are bred using hormonal injections.

Sexual dimorphism in this species is not pronounced.