Owners of large aquariums often prefer a small number of large fish swimming impressively among the decorations. Very often, their choice stops on large African catfish – Clarius, which are known for their ability to go without water for a long time and move between bodies of water on wet ground.

Clarias are freshwater ray-finned fish from the Clariidae family. These are rather a large catfish with an elongated eel-like body and 4 pairs of antennae on the head. The name of the genus comes from the Greek word “chaos”, which translates as “alive, tenacious.” And it is connected with the amazing ability of the Clarius to stay out of the water for a long time. This is facilitated by a special supra-gill organ, which allows the use of atmospheric air for breathing, and an abundant amount of mucus secreted by the skin, which prevents the fish from drying out.

Currently, the genus Klarievs includes more than 60 species of catfish common in Africa and Southeast Asia. Many of them are of commercial importance. The meat of these catfish is considered dietary. It does not have a specific fishy smell, small bones, and fat, while a high content of amino acids and vitamins is noted. 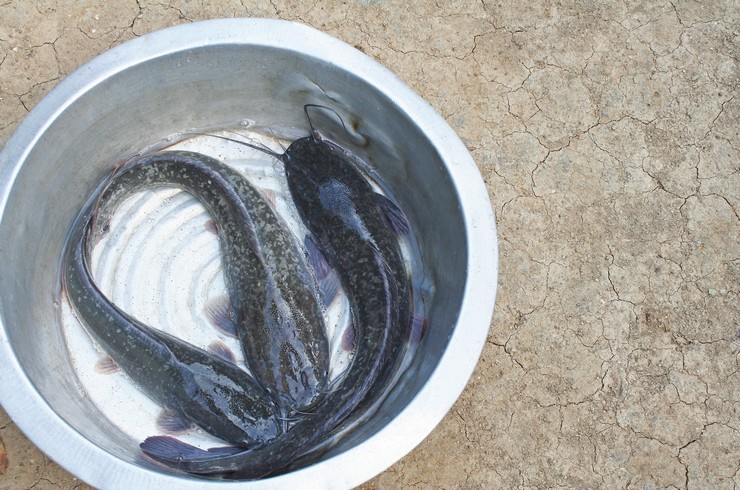 Only a few species of these catfish are popular in the aquarium hobby. It is important to consider that they are all giants compared to most species of aquarium fish. The body length can reach 50-70 cm. In addition, the Clarius is a predatory catfish, and it can only be kept with very large fish.

Due to their similarity in appearance, Clarius is often confused with Sack gill catfish. However, it is quite easy to distinguish them, because the former has a long dorsal fin, and the latter has a short one. They also differ in the organs of air respiration: in the Clarius it is a spongy supraciliary organ, and in the sack-gill catfish – special saccular outgrowths on both sides of the back.

Another interesting feature of the Clarius is the ability to generate light electrical impulses, with the help of which the fish communicate with each other.

In an aquarium, clarius catfish very quickly remember the owner and even allow themselves to be stroked.

Clarius is also known as the “Walking catfish” in the US and Europe. Indeed, when the reservoir dries up, the Clariuses are able to cover a distance of up to 5 km in search of a new home. The vigorous movements of the fins and mucus allow the catfish to move at a fairly high speed.

Clariuses have a dense eel-like body, elongated in length. The head is flattened, 4 pairs of antennae are located on it: two on the lower jaw, one on the upper, and one near the nostrils. They serve to search for food and orientation in space. The eyes are small. According to research by scientists, the catfish retina contains cones, that is, the fish have color vision. However, it is not yet known why it is necessary for the catfish to live at the bottom in almost complete darkness. 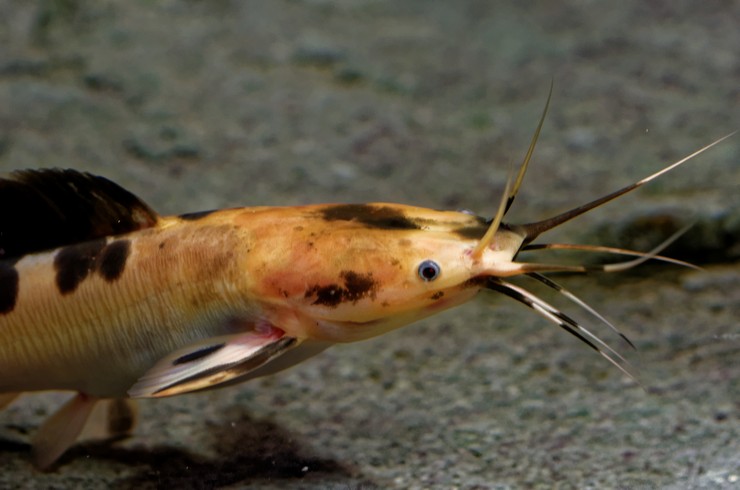 Body-color is varied and depends on the specific species. Most often, the fish are painted gray-brown, but there are also species with an olive body, white with dark spots, and albinos.

Clariuses are widespread in tropical regions of Africa and Southeast Asia.

In 1960, Clarias batrachus was introduced to the United States for breeding experiments. Somehow, the fish got into the natural waters of Florida and became a real ecological disaster. Having no natural enemies, the large predatory catfish began to actively exterminate local fish species. And its spread to the north of the country is held back only by poor tolerance of cold water and active fishing. 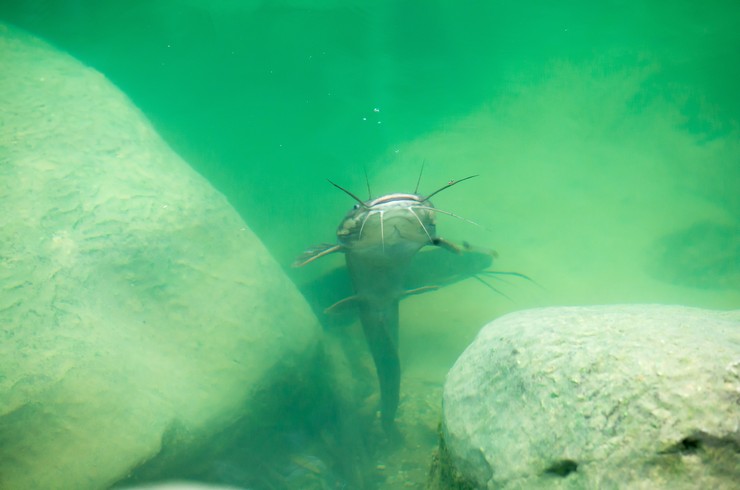 For the comfortable existence of Clarius catfish, you will need an aquarium of at least 200 liters, and for adults of large species, at least 400 liters. The aquarium must be tightly covered with a lid. Clarius catfish have an amazing ability to crawl into very narrow crevices and escape from the aquarium. However, you can find it at a considerable distance from the container. If suddenly this situation occurs, then the catfish must be quickly returned to the aquarium. However, this must be done very carefully so as not to prick with thorns on the pectoral fins – such injections are quite painful, reminiscent of a bee sting. There should be a distance between the lid and the surface of the water so that the catfish can take a “breath” of air if necessary. 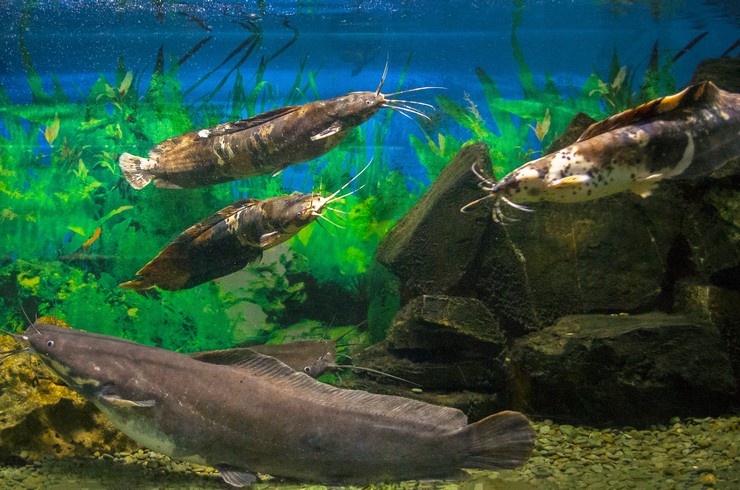 It is not recommended to put it in the aquarium soil with sharp edges, which can damage the skin of the fish. It is advisable to install several large snags, which the catfish can use as a refuge. In most cases, it is not advisable to plant live plants, because the Clariuses are very fond of digging through the soil and pulling out any twigs. The decorations must be firmly fixed so that the fish do not drop them with their mass.

The aquarium needs powerful filtration and aeration. Water changes up to 20% of the volume of the aquarium are made once a week.

The most common diseases of Clarius are:

Unfortunately, the Clarius is extremely difficult to fish. Anything that can fit in your mouth will be eaten, and they will constantly bully other neighbors. Therefore, the ideal solution is a species aquarium. You can keep fish singly or in pairs if there is one.

As neighbors, you can recommend armored catfish, large thoracotomy, astronauts, large cichlaz, pacu, bream, and shark barbs. Although their persecution is absolutely not excluded.

Clarius’ diet in nature is based on insects, worms, mollusks, small fish, as well as algae and aquatic plants.

When keeping in an aquarium, it is better to give preference to high-quality dry food. Special tablets for bottom fish can be used, such as Tetra Tablets TabiMin XL or large flakes such as Tetra Cichlid XL Flakes, because Clarius feeds without any problem in the upper and lower layers of the aquarium. Don’t forget about occasional plant feeding with TetraPro Algae or Tetra Pleco Tablets

It is not recommended to feed the Clarius live or frozen food. They do not contain all the nutrients that fish need and can cause parasites in the aquarium. It is categorically impossible to feed the clarius with the meat of warm-blooded animals: the fish are not able to digest and assimilate it.

Breeding Clarius at home is a rare phenomenon because huge aquariums are needed for spawning. Matching is also not easy, since sexual dimorphism is weak, and besides, males do not accept every female.

In nature, during spawning, fish dig holes in the sandy bottom, where eggs are deposited, after which the male zealously guards the clutch. The fecundity of a female can be up to 1000 eggs. The fry appears in about a day and immediately shows their predatory disposition – they try to eat everything they see.

Under artificial conditions, a group of Clariuses is planted in a large aquarium (or a special pond) and is expected until a pair is formed, which is then used for reproduction. The formed pair must be planted because the aggressiveness of the fish is greatly increased. Sexual maturity occurs at the age of 2-3 years.

After the end of spawning, the male and female must be removed so that the eggs are not eaten. Malek grows very quickly after hatching, regular sorting is required. It is necessary to feed it in small portions since the fry is prone to gluttony.