Contents hide
1 The Essentials in Brief
2 Anxiety in the Dog: Symptoms
3 Fear of Fellow Species
4 Fear of Objects
5 Fear of Noises
6 The Dog is Getting More and More Frightened
7 Our Recommendation: Strengthen the Self-confidence of Your Furry Friend 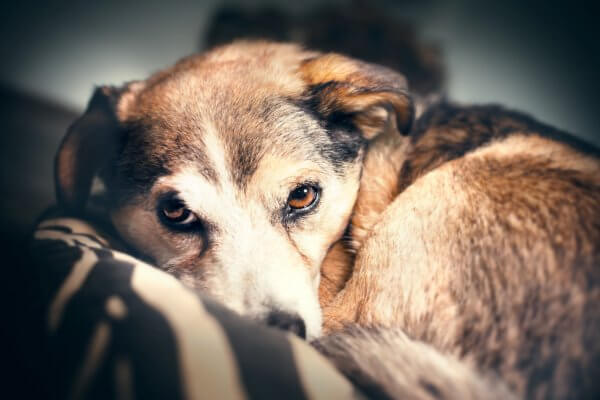 Anxiety in the Dog: Symptoms

Furry noses who are afraid tend to behave shyly. These four-legged friends often keep their distance from strangers or conspecifics. Fear usually leads to defense reactions. Typical behaviors to ward off people and animals are barking and growling. While some pets tend to snap or bite, others prefer to flee.

Often these signs also show up:

Dogs usually show their fear clearly. How the fear expresses itself depends on the situation. If the darling is afraid of other dogs and meets them on a leash, he may growl or bark. Standing hair on the back of the neck is also a sign of an insecure pet. While some four-legged friends try to fight the danger, others prefer to run away as quickly as possible.

If the companion is afraid of objects, such as plastic bags, he will wince when the bags move. Some dogs also hide from scary things under the table, behind their human, or behind the nearest object. Since the animal suffers from stress in a state of anxiety, it will generally pant. The fur noses freeze more rarely and hardly move in this state in order to avert the supposed danger. Some dogs are trembling badly with fear. Sometimes the fear leads to physical reactions such as diarrhea and increased salivation.

A dog is often afraid of other dogs, but noises can also frighten him. If the animal does not know certain sounds and noises, this sometimes leads to a fear reaction. It doesn’t matter whether the neighbor next door is hammering or the fire brigade’s sirens sound.

Dogs are particularly afraid of a thunderstorm. In the wild, thunder and lightning are dangerous, which animals instinctively feel. In such a fearful situation, the companions want to hide in a dark room. Severe tremors and drooling are almost always seen. Some fur noses have severe diarrhea. Others do not want to leave the house and keep their feces and urine. The biggest source of fear in such dogs is the annual New Year’s Eve fireworks. Therefore, make sure to stand by the dog on the worst night of the year or take a break over the turn of the year.

The Dog is Getting More and More Frightened

Persistent stress from fear can increase fear. Even if master and mistress suffer from stress or react fearfully or insecurely themselves, this increases the dog’s fear. Traumatic events increase anxious behavior. If a four-legged friend is bitten during the fear reaction, its fear of other dogs can increase even further. Other traumatic events, for example, if the dog accidentally falls into a river, can add to the fear.

Tip: A dog that is afraid can become a fear-biter. This is why it is important to find the source of the problem and work on it.

Anxiety in dogs can be improved with homeopathy and special dog training.

Our Recommendation: Strengthen the Self-confidence of Your Furry Friend

There are numerous scary situations in the course of a dog’s life. If you have found out that your darling is a scared dog, then you can help him so that he becomes a relaxed and happy companion. The following is recommended to strengthen the self-confidence of your four-legged friend: