Dog hair is a typical companion in households with animals and depending on the season it is sometimes more and sometimes less. Scaly skin and severe hair loss, including the roots, are clear alarm signs that something is wrong with your darling. It can be the rare skin disease sebadenitis. You can find out what exactly is behind this and what the therapy options look like here. 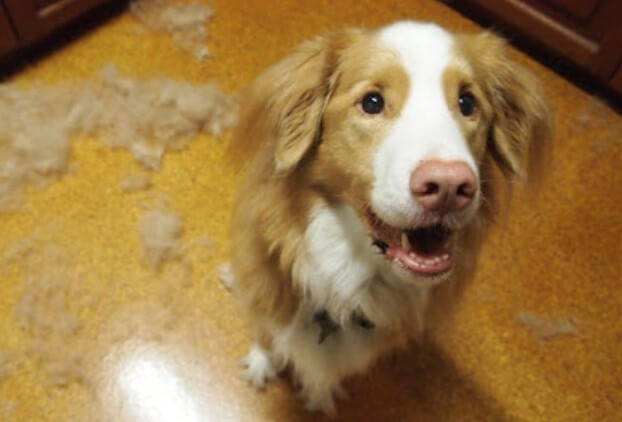 Sebadenitis is an inflammatory skin condition that can occur in both dogs and cats. To be precise, it is an inflammation and destruction of the sebum glands of the skin. These are important because they produce sebum, which forms a protective and fatty layer over the skin and prevents the skin from drying out. In sebadenitis, the important sebum glands become inflamed and are irreversibly destroyed in the course of the disease. The skin dries out, is susceptible to external stress, and is calloused.

The fur falls out in clumps, including the roots, so that the skin is completely exposed. The course of this rare skin disease is intermittent and fluctuating. Sometimes it takes months for a sick dog to have a new flare-up. Until then, the skin “rests” before it gets worse again. The life expectancy of a dog with sebadenitis does not change with the disease. However, sebadenitis is not curable, so that the fur nose has to struggle with the consequences and effects for a lifetime. Treatment, therefore, does not treat the cause, but the symptoms. For this reason, the therapy is lifelong.

Sebadenitis: causes of the disease not known

A cause is not known. Therefore, sebadenitis in dogs is one of the so-called idiopathic diseases. It is known that the immune system of animals attacks the sebum glands. Until they are destroyed so that they are no longer able to produce new sebum. Because of this, experts believe that sebadenitis is an autoimmune disease. In the case of an autoimmune disease, the immune system attacks the body’s own substances because it considers them to be foreign bodies.

Sebadenitis: symptoms in the dog

Contagion and incidence of the disease

According to some experts, this disease is said to be hereditary and therefore genetic. So far, this has only been proven in poodles, but suspicions in other breeds cannot be ruled out. The disease occurs in all dog breeds and mixed breeds. However, there are certain breeds that are more likely to get the disease than others. Sebadenitis often occurs in standard poodles, Akita Inu, Chow-Chow, Samoyed, English Springer Spaniel, and Vizsla. In general, four-legged friends are affected in their middle years of life.

Therapy and Homeopathy for Relief

Therapy for a dog with the incurable disease sebadenitis varies greatly. The destroyed sebum glands can neither be repaired nor restored by drug treatment or surgery. The only option left is the lifelong treatment for permanent symptom relief. The therapies aim to slow down inflammatory reactions. In addition, artificial ways are being sought to reconstruct the protective and fat layer on the skin to some extent. The following measures are available for this:

It is also important that the four-legged friend is not exposed to any stress. This means that the flare-ups of the disease can intensify and progress more quickly.