Nothing works anymore: an intestinal obstruction creates life-threatening congestion in the dog’s intestines. Quick action is now required. Doctors speak of an acute ileus in this situation. What are the causes of intestinal obstruction and how can you recognize it? We provide information on all aspects of this medical emergency in dogs. 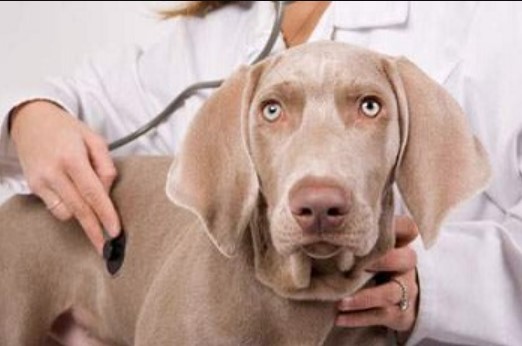 Dogs are curious and especially young dogs like to explore their surroundings with their mouths. One of the other foreign bodies is often swallowed. A lot ends up in the stomach that doesn’t belong there: pieces of bark, small stones, chestnuts, or – as with a bulldog, no less than 19 pacifiers. If the indigestible stomach contents pass through the small intestine, it becomes tight: There is a risk that the unhealthy food will get stuck. Mechanical closure of the intestine occurs. The technical term for this is “obstructive ileus”.

Another source of danger for mechanical bowel obstruction is the feeding of bones. If the four-legged friend often gets bones, this can lead to “bone feces”.

The food pulp enriched with bone fragments ends up in the large intestine. This removes the water from the mass: it becomes rock-hard and can clog the colon. The first signs of this are gray droppings and constipation. Warning: Feeding chopped bones can also lead to bone feces. Unfortunately, a tumor is also a possible cause of mechanical bowel obstruction.

Symptoms: How to Recognize an Intestinal Obstruction

Caution: If it is a partial intestinal obstruction, the disease is less noticeable. The dog loses weight and the symptoms mentioned are less pronounced.

That is Why an Intestinal Obstruction is so Dangerous

The congestion in the intestines blocks all digestion. The digestion of ingested food produces gases and toxins that can damage the intestinal wall under pressure. If the affected area is no longer supplied with blood, there is a risk of parts of the intestine dying off. The blocked section of the intestine can tear. If the food pulp mixed with bacteria penetrates the abdomen, there is an acute danger to life in the form of poisoning.

If an intestinal obstruction is suspected, take your four-legged friend to the vet quickly. At night and on weekends, contact an emergency veterinary clinic because it is an absolute emergency. The vet will palpate the patient and presumably arrange for x-rays or ultrasound scans of the abdomen. Some foreign objects such as socks, hair ties, or plastic parts are difficult to see on recordings. If the suspicion of intestinal obstruction is confirmed, usually only an operation will help. The vet surgically removes the foreign body. Depending on the initial situation and stage of the disease, the veterinarian will suggest further therapy options – for example, if it is more harmless constipation.

Cost of Surgery for Intestinal Obstruction

Treating an intestinal obstruction is costly. Because in the majority of cases an operation is necessary. Including a previous examination including x-ray or ultrasound diagnostics and anesthesia, you must expect at least $600. How expensive the entire treatment will depend on many factors – for example, the foreign body that has been swallowed and its location, as well as the condition of the section of the intestine. Sometimes the vet has to remove a section of the intestine, which in turn takes more of his or her time. Care outside the regular practice opening hours entitles the veterinarian to charge surcharges or a higher rate of fees. That is why the costs for the treatment of an intestinal obstruction including follow-up care can in some cases be up to $2,500.

Prevent Intestinal Obstruction in Dogs Through a Balanced Diet

First of all, it should be said: You cannot be absolutely certain that your dog will not suffer from an intestinal obstruction. However, a large part of the causes of obstructive bowel obstruction can be prevented. This starts with your diet: don’t give them large amounts of bones. Take action if you see the first signs of bone feces such as crumbly and gray-colored feces after a bone meal. Adding yogurt or oil to the food promotes the excretion of further bone pulp. Observe your four-legged friend closely in the following hours and days and, if in doubt, consult a veterinarian.

From puppyhood, give your dog the habit of playing with swallowable objects such as chestnuts, nuts, or stones.

Instead, offer him a different toy on the go, just like in the garden at home. If he already has a stone in his mouth, offer him a “swap” treat. Because if you take his prey away, the next time he is more likely to take it to “safety” with a bold gulp or to run away with it.