What is a German Shepherd Mixed Breed? 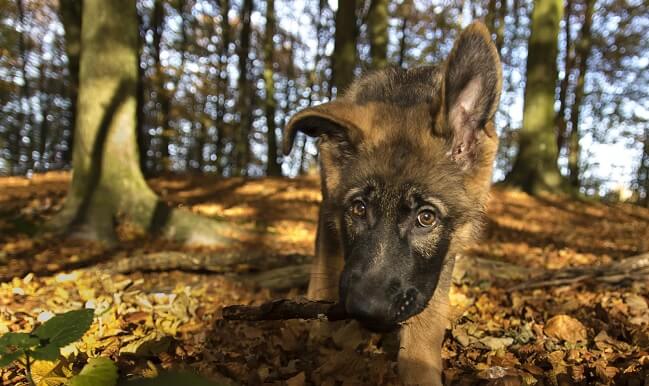 A German Shepherd mix is usually used when a German Shepherd and another breed of dogs have offspring. In contrast to designer dogs like the Labradoodle, husky, rottweiler, dachshund-shepherd mix-breeds, and the like are often not based on planned breeding. Animal shelters or animal welfare associations can be a good place to go for lovers of sporty mixed breed dogs.

Whether the German Shepherd elements or those of the other dog breed will dominate in the puppies is in the stars until adulthood. What is conceivable, however, is that the German Shepherd can pass on its protective instinct, its docility, and its imposing stature to its offspring.

It is not possible to determine the appearance of a mixed breed dog in advance. Even among the siblings of a German Shepherd mix litter, there are big differences in terms of size, coat, and body type. Therefore, the external characteristics of a German Shepherd Dog must first be considered.

The German Shepherd Dog was used as a herd service dog for a long time. When looking after and protecting, qualities such as ingenuity, self-confidence, and a high level of alertness are required. In addition, lovers of the breed appreciate his adaptability, his willingness to cooperate, and his playful nature.

The hunting instinct of a German Shepherd is moderate. He is much more concerned with protecting his loved ones and reporting imminent danger. Crossing it with other dog breeds can result in some elements of the German Shepherd being strengthened or weakened. As with all mixed-breed dogs, the following applies: the character will only fully reveal itself after entering adulthood.

When breeding the working dog, the focus was not on appearance, but on health and robustness. Unfortunately, both pure-bred German shepherds and hybrid dogs are not immune to some diseases.

For purebred German Shepherds, the average life expectancy is 10 to 13 years. How long a mixed breed dog lives depends, among other things, on the other breed of dog and the diet.

How Do I Raise a German Shepherd Mix?

The German dog breed is known for its “will-to-please”. This will to please is shown by attentive and focused behavior during a learning unit. Added to this is the playfulness of the German Shepherd. In addition to treats, dog toys can also be considered as a reward. When crossing with retrievers or herding dogs, these pleasant characteristics will show up in the offspring.

However, German Shepherd mixed breeds are not considered absolute beginner dogs. Basically, a dog with the genes of a German Shepherd can quickly become frustrated when bored. In order to prevent undesirable behavior from occurring in the first place, sufficient mental and physical activity must be ensured in everyday life.

Since German Shepherds are hardworking working dogs, a lively disposition can also be expected in the offspring. Thus, shepherd mixed breeds will meet their soul mates in sports enthusiasts.

A family with children must be aware of the dog’s strength and size prior to adoption. With the shepherd dog, a patient and child-loving character come into play when crossing. But as with all dogs, clear rules for both dog and child should be established from the start. In addition, the following applies: The offspring should never play unsupervised with the German Shepherd mix.

Depending on which breed of dog is involved in the mating, different dog sports are suitable for a German Shepherd mix.

Shepherds score with their great adaptability. With enough activity and long walks in nature, they are satisfied and relaxed with life in an apartment. However, the increased vigilance including barking can cause problems in the neighborhood. For some German Shepherd mix constellations, a house with a garden is clearly recommended.

The popular Labrador Retrievers are often the first choice for active novice dogs. But before adopting a German Shepherd-Labrador mix, it should be noted that the little puppy can later weigh up to 40 kg. Coupled with its high energy level, this hybrid keeps his family on their toes. A mix of activities and rest phases ensure a relaxed and gentle German Shepherd Labbi mix.

The beautiful German Shepherd-Husky mix originates from the two majestic dog breeds. The size starts at 50 cm – larger specimens reach a shoulder height of up to 64 cm. There are also big differences in terms of weight with 20 to 40 kg. This hybrid is the right choice for sporty people with canine experience and a preference for original dogs.

Long fur, brown eyes, and an athletic body: the “Golden Shepherd” is a real feast for the eyes. Since both dog breeds have worked with humans in the past, this mixed breed dog is also cooperative. However, it is only suitable to a limited extent as a guard dog. It remains to be seen whether the mix will be friendly like a golden retriever or suspicious like a German Shepherd to strangers.

Strong protector: This mix gets a good portion of awakening instinct from both parent animals. Since the Rottweiler is a lot sturdier than the German Shepherd, this mixed breed grows at an amazing speed in the first few months. Dog owners of this mixed breed, therefore, pay attention to an appropriate amount of food and moderate physical exertion during the development phase.

This variant clearly stands out from the others. This is sometimes due to the short legs of the dachshund. He is by no means a lap dog, but rather a persistent hunter. But what does a mixed breed with a German shepherd and a dachshund look like? The offspring is reminiscent of a lowered German Shepherd. In some cases, this mixed breed dog bears a resemblance to the Corgi.

Rare Beauty: Finding this mix is going to be a tricky business. The characteristics of both parents fit well together. Both are intelligent, alert, and athletic. Does the hybrid also have the typical Dalmatian points? Nobody can say in advance, but some points are certain to occur in German Shepherd-Dalmatian litters.

The two German dog breeds have a large fan base worldwide. Outwardly, both may be clearly different from each other. But in terms of character, shepherds and Dobermans have many parallels. You can expect a litter of puppies that are extremely clever and docile. For the youngsters, challenging mind games or training to become a man trailer or rescue dog are possible.

The shepherd with a bear look: The shepherd-Bernese-Sennen-Mix clearly joins the list of extraordinary hybrid dogs. The appearance of some offspring is comparable to that of the Hovawart. The common denominator of both parents is the high instinct to watch. For dog-experienced people who are looking for a family member and defender of home and yard, this mixed breed is therefore well suited.

For dog professionals: The German Shepherd Kangal Mix is clearly not for dog beginners. Because the Kangal Shepherd Dog is a proud, protective, and stubborn four-legged friend. In addition, a Kangal mix in a rural setting with a large plot of land is best. Since Kangals can reach a height of 81 cm and a weight of 70 kg, his offspring are among the really big, despite the shepherd dog share.