The history of the Shih Tzu breed goes back centuries. The first Shih Tzu appeared in Tibet about 2 millennia ago. Their ancestors are the Lhasa apso, bred by monks. The ancestors of the Lhasa apsos, in turn, are considered to be the watchdogs of the temple. 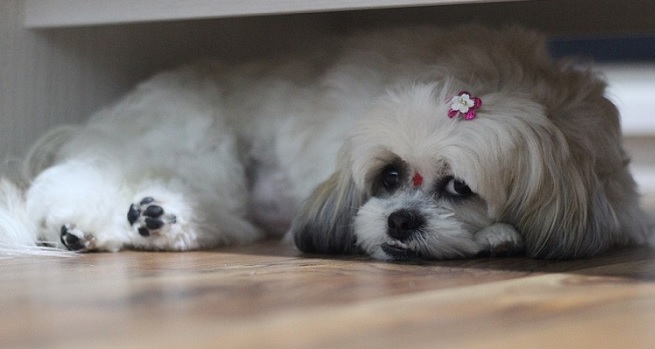 The Shih Tzu breed is covered with many legends.

According to one of them, the Buddha was accompanied by a small dog in his wanderings around the world. However, the baby could at any moment turn into a lion on which the Buddha rode. Locals believe that a lion dog standing at the entrance will bring prosperity and protection from evil spirits to the house.
During the reign of the Qing dynasty in China (1644-1662), Tibetan lamas brought lion dogs to the imperial palace as a tribute.

In 1908, the Dalai Lama presented two “lion dogs” to Empress Tsi Xi as a token of gratitude. The Empress highly appreciated the gift and made a significant contribution to the development of the breed. She made sure that these dogs did not interbreed with the Pekingese, who also lived in her chambers. And on pain of death, she forbade taking the Shih Tzu out of the palace.

The Empress herself compiled the first description of the Shih Tzu breed, according to which its representatives move like goldfish, and the color of their fur resembles a lion.

After the death of the empress, the Shih Tzu continued to be bred but somewhat modified. The muzzle and legs are shorter, and the coat is longer.

Especially valuable were considered golden (imperial color) individuals with a white mark on the forehead (the seal of the Buddha).

The Shih Tzu breed would hardly have survived if, even before that, some representatives had not come to Europe, in particular, to Great Britain. The British kept the breed. This is not surprising, given the love of these islanders for the dog tribe.

The first Shih Tzu breeders in Europe were General Douglas and Mrs. Brownrig. In 1930 the first litter was obtained.

In 1934 the British established the first Shih Tzu club, and in 1948 they adopted the breed standard. In the 60s of the 20th century, “lion dogs” came to the United States.

Since it was in England that a new era in the history of the breed began, Great Britain to this day remains the curator country, which forms and approves the standard.