The Husky is perhaps the most good-natured of all the Spitz-like, sharp-eared northern dogs, with a wonderful character. The origin and history of the husky breed, the history of its friendship with humans, exceptional reliability, and loyalty go back centuries. 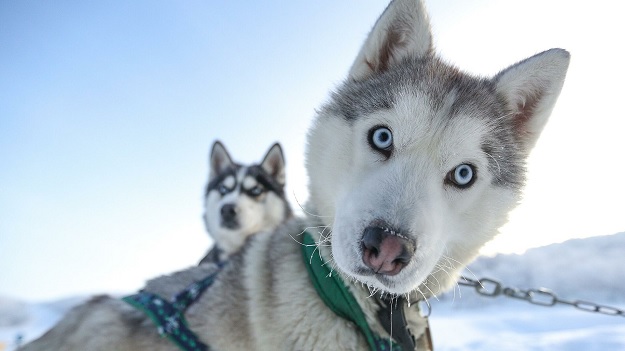 The homeland of the husky is Siberia. The breed of huskies, Siberian sled dogs, was bred by the nomadic tribes of northeastern Asia. They needed a strong and resilient sled dog, not just a hunting companion. The team required at least 9 dogs, but a large amount of fish caught made it easy to feed such a large number of animals.

Representatives of the Russian Empire, actively exploring the North in the 17th and 18th centuries gave a new impetus to the development of sled dog breeding. The sleds became larger and more capacious, therefore, more dogs were required.

The beginning of the “gold rush” in Alaska caused a sharp surge in demand for sled dogs from the Americans. Since 1908, they began to actively import fluffy “horses” from the Far East.

Sled dogs have proven themselves to be fast and reliable vehicles. It was thanks to them (and, in particular, thanks to the leader of one of the teams, the dog Balto), the city of Nome was saved from the epidemic. Balto erected two monuments: one in Alaska, the second in New York. This story is just a single episode on the breed’s walk of fame.

The Siberian Husky breed was registered by American dog handlers in 1934. At the same time, the standard appeared.

The term “husky” (or rather, a distorted “Eski”) meant the Eskimos. This was the name of the Eskimo dogs. But when the Chukchi dogs arrived in North America, they, to distinguish them from the Eskimo “colleagues”, began to be called “Siberian huskies.”

During the Second World War, huskies proved to be excellent in the rescue service. Also, thanks to this breed, sports dog sledding has become popular.

There are three varieties of huskies (groups within the breed): show, racing, and working.

Working Huskies are the rarest. All huskies began with them. They transported not very heavy loads over long distances, but rather quickly. They do not shine with beauty, but they are very smart and unpretentious, hardy and fast. Now they are no longer used for their intended purpose. But these dogs are involved in the tourism business, a part of which is dog sledding.

Racing huskies are sports dogs. They develop very high speeds and are distinguished by a specific exterior, which in turn differs in different nurseries. They are united by their short fur. These dogs are also divided into subgroups depending on the sport.

Show huskies are the ones we see in the ring. They, in turn, are divided into two groups: American and European. The American “subspecies” are more powerful, heavier. Representatives of the European type are sleeker and lighter. They are united by a shortened muzzle, which makes the husky prettier, but worsens the heating of the air inhaled in the cold.

The official husky breed standard still describes a working dog. But, as a rule, in the ring, huskies are judged according to the preferences of specific experts. In racing, the main thing is time, not the exterior. The Huskies, which are bred in Great Britain, are the closest to the official standard.