Highly contagious infections remain a big problem, as they often lead to diseases of horses, and in particular young animals. One of the reasons for the outbreaks of such diseases remains the violation of the accepted vaccination schemes for adult animals and foals. Violations of the conditions of keeping horses, their import and export can also provoke an outbreak of infection. A significant number of problems in raising foals are caused by diseases of the gastrointestinal tract. And here it is necessary to distinguish between infectious and non-infectious diseases since treatment regimens can differ significantly. 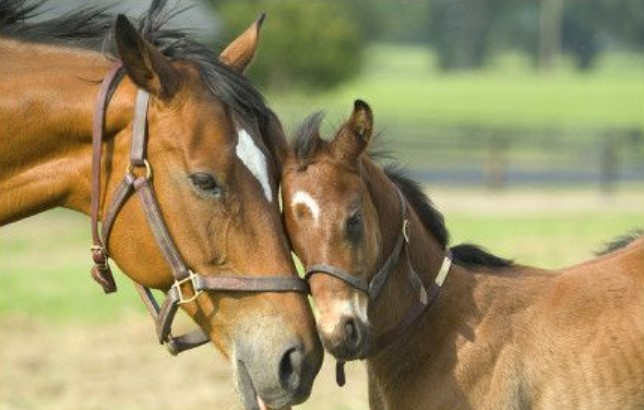 Quite often, foals at the age of 1–3 weeks may develop non-infectious diarrhea with the release of characteristic soft, viscous, yellowish feces. As a rule, this condition does not pose a serious danger to the life of the foal and disappears without special treatment within 7 days.

It may be caused by the high content of sex hormones in mare’s milk, since by the third week after foaling, the animal is again ready for mating. Another reason for the appearance of short-term non-infectious diarrhea in the first weeks of foal development is a change in the intestinal microflora, which is due to a change in the animal’s diet. An effective remedy in such cases is the addition of probiotics to food. However, it is first necessary to conduct diagnostic testing to accurately determine the causes of the problem.

Symptoms that indicate the infectious nature of diarrhea may include:

Infectious diarrhea in young animals is one of the most common manifestations of serious diseases caused by microorganisms that have invaded the environment.

The causative agents of salmonellosis in young animals are bacteria of the genus Salmonella. The disease is transmitted through water, food, and excreta from host animals. Possible intrauterine infection from a carrier mare. In the course of the disease, mainly the intestines are affected. Bacteria invade the epithelium and disrupt the integrity of cells. The risk of infection increases during the warmer months.

Doctors note the high sensitivity of horses to this genus of bacteria. Most often, the risk of infection is increased by:

Sick foals cannot eat, spend most of the time lying down, their body temperature rises to 41 ° C. A characteristic manifestation is feces with a pungent odor and inclusions of blood and mucus, swelling of the limbs in the joints. In the absence of timely measures, foals can die within 48 hours from the moment the first symptoms appear. There is also a risk of chronic salmonellosis.

The most accurate method for diagnosing this disease is the study of feces for the content of Salmonella. For the treatment and relief of the condition, intravenous infusion of fluids and electrolytes is usually used, as well as measures to eliminate intoxication of the body.

Your doctor usually prescribes oral antidiarrheal drugs for treatment. The selection of antimicrobial drugs is carried out taking into account the sensitivity of the bacteria isolated during bacterial culture.

Another formidable disease is colibacillosis (the causative agent is Escherichia coli). There are frequent cases of the onset of the disease in the first hours of animal life with a rapid transition to septicemia followed by the development of infectious arthritis, osteomyelitis and meningitis. Often the reason for this vulnerability in foals is low immunity. Infection can occur orally or in utero.

Symptoms in the form of loss of appetite, colic, fever occur suddenly. Patients have diarrhea with whitish, frothy fecal matter. The mortality rate of this disease is very high; without treatment, foals die in the first days of the disease.

The problem of treating colibacillosis is the high resistance of Escherichia to antibiotics. Therefore, before the appointment of treatment, a bacterial culture is carried out with the determination of sensitivity. Also used are hyperimmune sera, symptomatic agents, and electrolyte infusions. For the prevention of the disease, pregnant mares are vaccinated and young animals are immunized with specific hyperimmune sera in the first days of life.

The causative agent of this infection is a bacterium of the genus Clostridium, which is often found in the soil and on the surface of surrounding objects. Disease symptoms:

Painful manifestations are due to damage to the intestinal mucosa by the released toxin. The disease often ends in the death of the foal. As a therapeutic measure, specialists often take the introduction of antitoxin or hyperimmune serum.

It occurs against the background of the high sensitivity of the animal’s body to anaerobic rods of the Clostridium piliformis species. Foals of 1–5 weeks are usually susceptible to them. It is worth noting that even in severe cases, the disease can be asymptomatic, but after a few days, newborn foals can be found in a coma or death. Treatment usually remains unsuccessful due to the hyperacute course of the disease. An autopsy most often confirms the version of serious damage to the liver tissue.

Attention! A veterinarian should be responsible for diagnosing the disease and prescribing treatment. Medicines should not be used uncontrollably.