The Caucasian Shepherd Dog is a serious beast, and it is completely unacceptable and fraught with serious problems to consider this majestic dog as an addition to the interior or a “subject” of bragging to neighbors.

Surprisingly, all the indisputable advantages of the Caucasian Shepherd Dog by inexperienced dog breeders and people who do not really know the breed are considered as disadvantages.

The Appearance of the Caucasian Shepherd Dog 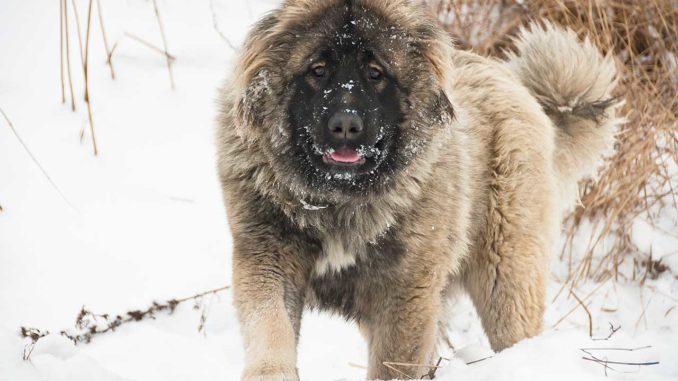 Of course, about seventy centimeters at the withers, sixty kilograms of powerful muscles covered with thick and dense hair, confidently stepping on the ground with massive paws, strong jaws with frightening fangs are an impressive sight, causing fear along with genuine admiration for this work of nature. The look of the Caucasian Shepherd Dog is full of fearlessness and power, strength and strength. Its fur, flowing down with a thick mane, makes it easy to endure even severe frosts, while dogs of other breeds compassionately tighten their paws and strive to return home as soon as possible. Many owners of Caucasian shepherd dogs comb their pets and knit socks, mittens, and scarves that are excellent in terms of their warming qualities, and many articles have been written about the therapeutic effect of dog hair. But at the same time, if the Caucasian Shepherd Dog lives in a city apartment, then the owners are guaranteed constant cleaning of the home from the ubiquitous wool, especially during periods of molting.

In addition, this large breed needs a place for a comfortable stay; small one-room and even two-room apartments are completely unsuitable for the life of an animal. If such a dog, wanting to rest, lies down, stretched out to its full height, then the owners will have to move around the house along the wall. Yes, and with full walks with a dog, problems can arise, since on city streets, where a car is parked on every free meter, you especially do not walk around, and in small city parks, elderly people and parents of small children are not at all touched at the sight of a huge animal.

The breed can be characterized by its behavior in a few words – confident, calm, without unmotivated aggression. It is precisely unmotivated aggression, since if a stranger starts shouting and waving his hands in front of the owner of the Caucasian Shepherd Dog or enters the owner’s territory without invitation, then he will necessarily have to get acquainted with the aggressive, in some cases even spiteful, the behavior of this dog. The advantages of the Caucasian Shepherd Dog include the fact that it is an excellent guard. The breed was bred primarily to protect the territory and its owner, and these qualities are firmly embedded in it and it is probably difficult to find another breed that performs its protective functions without fear. But to some extent, this excellent quality under some circumstances also becomes a disadvantage of the Caucasian Shepherd Dog, because they guard everyone living next to it, and all items placed on its territory. No one will be able to borrow something from the owner and calmly take it home, and if the dog is not closed in another room, the animal may not allow, for example, medical workers to hospitalize a person living next to it.

Service Qualities of the Caucasian Shepherd

This breed has all the necessary qualities for performing service. First of all, it is worth noting the great intellectual abilities of the dog, and its ingenuity. Unlike many service breeds, Caucasian Shepherd Dogs are disciplined, but these dogs do not accept derogatory behavior towards themselves, they will faithfully and faithfully serve their master only with respect for them. Unfortunately, there are very few training methods for this breed, and the training process must be extremely accurate and somewhat careful. As experienced dog handlers say: the Caucasian Shepherd is not a German shepherd, it is not a “servant”, it is a wolfhound with pride and independence, and a “Caucasian” will not bring the owner the thrown balls on command. And yet, it is difficult to teach security functions in someone else’s territory, since this breed believes that there is nothing to protect it “at a party”. The dog, of course, can bite the training sleeve a couple of times out of politeness, but on this, it will consider its protective functions complete, so the animal needs to be trained only on its territory.