Balto, the famous sled dog, is a celebrated hero on four paws in the USA. Among the admirers was none other than the then President of the United States. What act earned him this honor? A sleigh ride under extreme conditions made it possible to transport a life-saving serum to a remote location.

Balto the Sled Dog: the Essentials in Brief 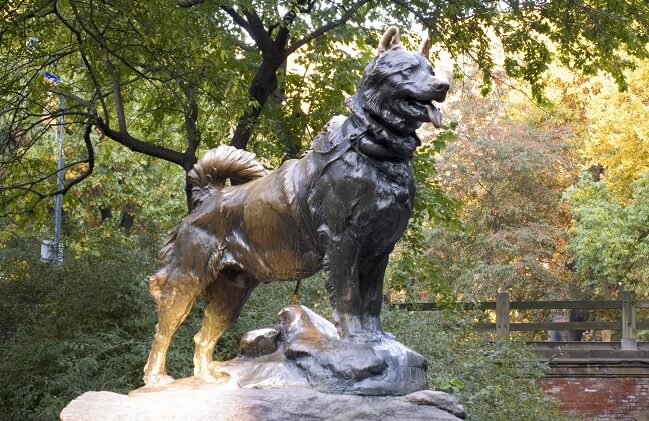 A dangerous epidemic broke out in the small town of Nome in 1924. The residents fell ill with diphtheria, which is still prevalent in developing countries to this day. The infectious disease attacks the airways and the heart muscle and can lead to suffocation.

There were more deaths in the small town. Children were particularly affected by the disease as they are more prone to diphtheria. The doctor no longer had any durable antitoxin that was used against diphtheria. The city of Anchorage had plenty of supplies. From there on, a race against time began.

Nome was Isolated – There was Only One Solution

Mighty ice masses, bitter cold, and heavy snow gusts – the rough area around the Bering Sea was like a snow hell in the winter months of the epidemic. Ship passages to Nome were icy and the nearest unfrozen harbor was 1000 km away.

In addition, the freezing sub-zero temperatures made it impossible to transport the serum quickly by plane at the time. The people of Nome seemed trapped in the situation. But then there was one last hope: 20 courageous sleigh drivers and 150 dogs took the dangerous route to bring the saving serum to the population.

Sled dogs were the only means of transport in Alaska’s arctic winter at the time. But this sleigh ride pushed everyone involved to their limits. The transport had to be carried out by relay race at a speed never before achieved. The daring plan was: In just five and a half days, the 20 teams should cover a total of more than 1000 km.

Balto and His Team Performed at Their Best

The Siberian husky Balto was one of the many brave and cold-rugged sled dogs. He was the lead dog of musher Gunnar Kaasen’s team. As the lead dog, he took on the most difficult part of the team. His unit was assigned to the penultimate stage.

But it turned out differently than planned: Kaasen also had to take the last stretch with his dogs. Extremely poor visibility made the sleigh ride extremely difficult. During the transport, it was sometimes only the extraordinary sense of direction of the sled dogs that brought the team to their destination.

In the course of the sleigh ride, there was also a dramatic accident. Strong icy gusts of wind brought the team from Kaasen off the path. The package with the life-saving serum was thrown out in the fall. Kaasen managed to find the package despite poor visibility.

In the early morning of February 2, 1925, the team around Balto and Kaasen reached the town of Nome in time. Kaasen handed the serum unscathed to the population. Thanks to the efforts of the Siberian husky, its brave conspecifics, and the mushers, the population was saved.

Another decisive factor for the success of the mission was the musher Leonard Suppala, who took the longest route with his team – including the lead dog Togo. Sadly, some of the sled dogs also collapsed during the transport and succumbed to the consequences of the dangerous sleigh ride.

All associated mushers and sled dogs are part of a truly heroic story of the 20th century that is second to none.

Balto – His Life After the Serum

A short time later, Balto was housed with a few other sled dogs in a theater in Los Angeles. There, visitors could marvel at the heroic four-legged friends for a fee. Fortunately, however, the unworthy life in a theater soon came to an end.

The animal lover George Kimble managed to buy the dogs from the theater for free through donations.

Particularly touching: Among the supporters were many children who, with a little money, campaigned for the liberation of Balto and his sled companions. All dogs moved from Los Angeles to Cleveland to a zoo. According to sources, Balto lived a dignified life there until the end of his life.

Fame, Applause, and Honors for Balto:

All over the globe, people followed the daring transport through Alaska by radio. The people celebrated the teams and Balto in particular became a four-legged star. There was also admiration from the most powerful person in the world: the then President of the United States of America, Calvin Coolidge, praised the indefatigable husky. But Balto’s appreciation went even further:

Just ten months after the heroic deed, the sculptor Frederick Roth created a statue of Balto. The masterpiece can be admired in Central Park in New York.

An image of Balto in the form of a bronze sculpture was also created in the city of Anchorage. After the four-legged hero died, he was groomed and is on view for visitors to the Cleveland Museum of Natural History.

On the occasion of Balto’s 100th birthday in 2019, the museum is holding a birthday party in memory of the courageous husky. The story of the brave sled dog also made it onto the screen.

The touching story of the rescuing sled dog Balto has what it takes for a heroic epic. In addition, the story particularly fascinates animal lovers and children. This is probably exactly what the filmmakers who produced a cartoon based on Balto in 1995 thought.

In Germany, the work was entitled: “Balto, a dog with the heart of a hero”. In 78 minutes, the film tells of Balto, a wolfhound who, with his dog buddy Boris and two polar bears, brings the rescue serum to Nome. Celebrity dubbing voices of Kevin Bacon, Bridget Fonda, and Phil Collins round off the cartoon Balto.

The story of Togo, Leonard Suppala’s lead dog, was also made into a film. The Disney + drama film starring Willem Dafoe was released in December 2019 under the name “Togo”.