The Thoroughbred comes from England. This breed appeared in the 18th century for the needs of the army, and today it is used in equestrian sports. It holds the title of the fastest horse in the world. Although this breed was obtained by mixing the blood of horses of English and Eastern origin, it is classified as a thoroughbred. 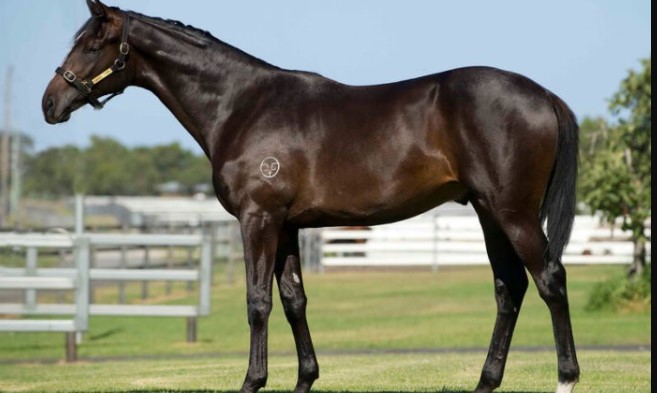 Contents hide
1 Origin of the Breed
2 Breed Features
3 Character
4 Advantages and Disadvantages
5 Breeding
6 Maintenance Conditions and Care
7 Feeding
8 Where is the Thoroughbred used?

In the 17th century, the English army needed fast horses. The military had local horses at its disposal which were carefully selected for breeding according to certain standards. In order to improve the riding qualities, they started to crossbreed English mares with the stallions of Eastern origin brought into the country.

It is not known what breed the imported horses belonged to. It is possible that they were of Arabian or Turkish origin. The development of the Thoroughbred was influenced by three stallions; it was their descendants that became its core:

The stallion Darley’s grandson deserves special attention as there were 344 outstanding racehorses that appeared in his pedigree. His name was Eclipse, he was not a beautiful horse, and the purity of his pedigree was questioned. This stallion had a raised croup, and when running his head dropped so low that it dangled between his front limbs. He could not boast of a great appearance but he won popularity due to the speed of running. He had no equal in competitions.

After the stallion’s death, it was discovered why he always won races. The autopsy showed that his heart weight exceeded 6 kilograms and it was 23% more than other horses had. Later, the scientists found out other facts – it turned out that this horse had very strong joints and tendons, and his unusual body structure helped him come first to the finish line. Eclipse passed on his genes to his descendants, so that most of them became excellent racehorses.

The Thoroughbred is the fastest horse in the world. Beach Rekitu, a stallion belonging to this breed, set the world record by running a distance of 409 meters at 69.6 km/h. The running speed at short distances is the main feature of the Thoroughbred.

The Thoroughbred is quite tall. The average height of males is 1.65-1.75 m. The built is dry, belonging to the square type, the body of these animals is short. The constitution is angular and somewhat coarse. 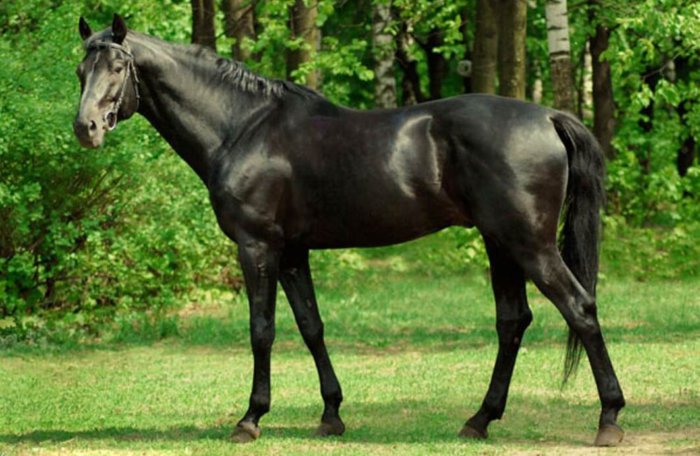 The Thoroughbred is characterized by voluminous lungs, a large heart, and very strong joints. These physiological characteristics help the horses to win many victories in horse racing competitions.

The representatives of the Thoroughbred are very temperamental animals. Their character can not be called calm and compliant. Experienced riders know how difficult it is to train and educate such a horse. They are stubborn, explosive, and unruly horses.

These horses are not suitable for a beginner interested in riding as they can be disobedient at the most unexpected moment which can lead to loss of control and falling out of the saddle.

In some ways, it is the hot temperament that helps the representatives of this breed to achieve success in equestrian sports. They have persistence and the will to win. 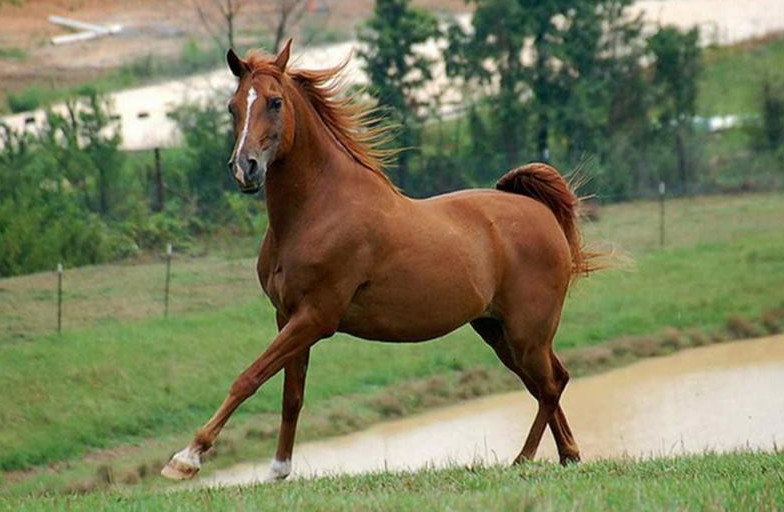 The positive qualities of the breed include not only the running speed of the horses but also their ability to pass on their qualities well to their descendants. The Thoroughbred stallions are used all over the world as improvers of riding and harness breeds. In crossbreeding, they hand down their:

The Thoroughbred is not without its disadvantages. One of them is an unruly and proud character. Other disadvantages of the breed are:

The Thoroughbred are bred all over the world for breeding and sport. The requirements for the breeding stock are very high. Not only the appearance, health and pedigree of the applicants are taken into consideration but also their achievements. For instance, only the horse which received at least one important prize at the horse races can become a breeding stallion. As for the mares, the requirements are not so strict, and females who do not take part in the races are allowed to reproduce. 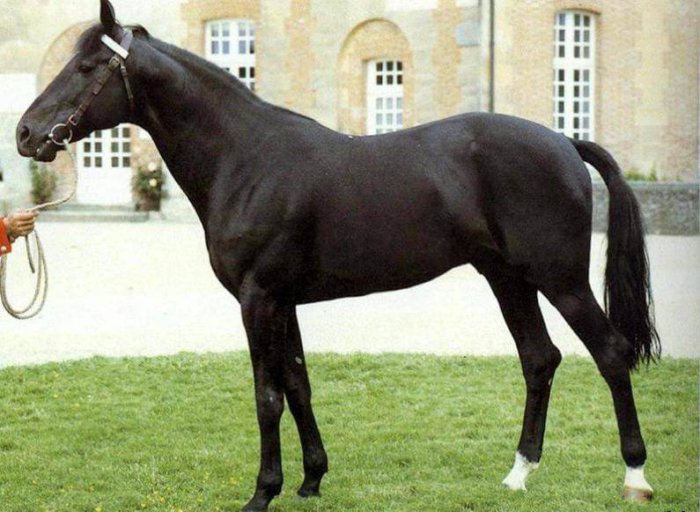 The breeding of the Thoroughbred for racing is carried out by large stud farms because the maintenance of such horses is not cheap. The price of the foals for sport differs depending on their age:

The Thoroughbred is demanding to the living conditions. The horses are kept in warm and dry stables equipped with ventilation. It is very important to provide a normal level of light inside and carefully keep the place clean. The stables should be cleaned every day in the morning and evening.

The care of the Thoroughbred includes regular bathing. The animals should be washed twice a week, and sometimes more often, using only warm water and special shampoos. It is unacceptable to wash the Thoroughhbred with curd soap – it dries the skin and has a detrimental effect on the coat.

High-quality nutrition is the key to a horse’s health. The Thoroughhbred should be fed three times a day. Half of the ration is hay. The animals also should receive fresh grass in the summertime, it saturates the body with vitamins. In addition to the green fodder, the horses should eat:

It is important to make sure that the pets always have enough clean drinking water. The horses that exercise a lot drink up to 60 liters per day. In winter, the need for drinking is reduced to 30 liters per day.

Where is the Thoroughbred used?

The main purpose of the breed is equestrian sport. These horses were bred specifically for racing. They are the fastest horses, they have no equals in the speed of running on the world stage. These animals are used for hunting foxes in England as well. Some athletes use them in triathlon. Another use of the Thoroughbred is to improve the performance of other breeds. 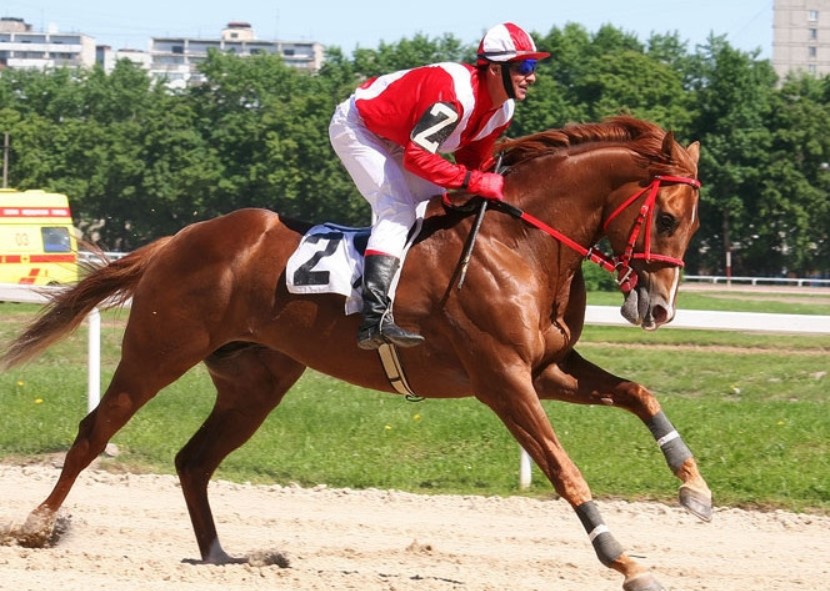 The Thoroughbred is today the best known and most expensive because of its running speed. Despite their disadvantages, these horses are very highly valued. Horse breeders are willing to pay huge sums of money for some horeses. For example, the stallion Shareef Dancer was sold in 1983 for 40 million dollars.