Despite its impressive appearance, a formidable grin, a frightening barking, the Tibetan Mastiff is able to assess the situation and will not show aggression in vain, and treats the owner and his family members with all love. 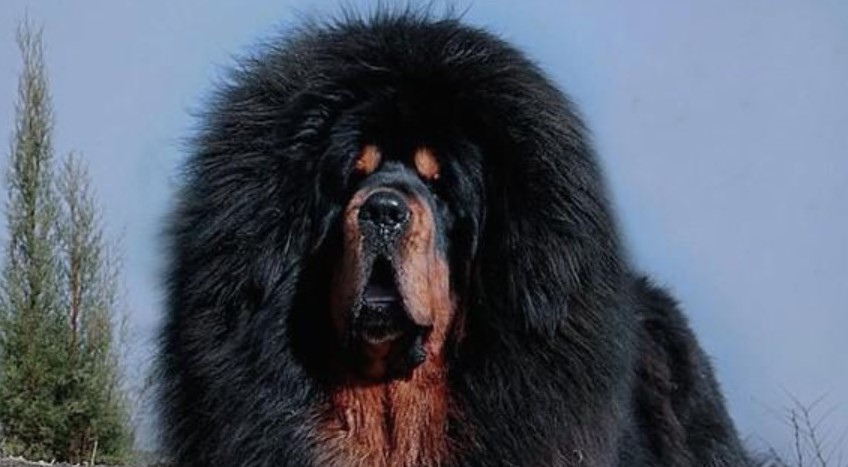 The temperament of the Tibetan Mastiff is complex, in the dog, there is also tenderness, love and stubbornness, self-confidence, the desire to protect, and a number of other traits.

Quite independent animals still need to communicate with their owner, they love affection. Representatives of the breed have the ability to feel the mood of the owner.

Tibetan mastiffs, who understand by their nature, treat children well, patiently enduring their tricks, with a share of caution, realizing that children are defenseless and weak creatures that must be treated with condescension. However, you should not leave the Tibetan Mastiff alone with children, especially if there are other people among them (for example, neighbors). Children tend to play loudly, run, fight, cry sometimes because of trifles, to which the dog can immediately respond and stand up to protect the owner’s children, thinking that the child is in danger or harm. If children are too intrusive, provoke an animal, tease, then children risk being bitten. Therefore, it should be remembered that although the dog is affectionate with children, it is still not suitable for the role of a nanny. Children should be explained that the dog must be treated with respect, keep a distance, without interfering, once again in the pet’s space. The animal can intervene if it sees that the spouses are swearing, loud discussions are held between adults.

At a young age, animals are active, like to run, and willingly play with the owner, but with age, they become less mobile, more serious, showing more clearly the qualities of a guard. Sedentary, devoid of active walks and physical exertion, excessive attention of the owner, Tibetan mastiffs adapt to this lifestyle and can spend time lying at the feet of the owner.

Initially, the breed was bred as a guard. The Tibetan Mastiff has retained its guarding qualities to this day and is considered one of the most reliable guard dogs.

The temperament traits of the Tibetan Mastiff include poise and restraint. Thanks to these qualities, the dog treats strangers with distrust, if the owner communicates normally with strangers, friends, does not show aggression, although he does not take his eyes off them until they leave his territory.

If the owner is in danger, the bold Tibetan Mastiff will fearlessly rush to his defense, assessing the situation beforehand. Representatives of the breed are smart enough, and with the right upbringing, they are able to distinguish between good and bad people. Protecting its loved ones, the animal is able to independently make decisions and assess the degree of threat. Thanks to this trait of character, the Tibetan Mastiff will not show aggression unless there is a reason for it, and will not cause false alarms. Although living on the street, for example in the courtyard of a country house, he will responsibly guard his territory all night, warning the owner about the approach of strangers with loud barking, which can sometimes annoy neighbors.

The provoked Tibetan Mastiff turns into a formidable beast with disheveled fur, frightening grin, angry eyes, who does not retreat in front of anything in order to protect himself, his territory, and his family. Therefore, when deciding to buy a dog of this breed, one should be aware that an improperly educated pet can do serious things in the future, which the owner will then have to answer.

To a greater extent, the dog seeks to protect than to please, which should be taken into account if the animal lives in an apartment or in a house, and not on the street. Therefore, you need to walk on a leash, in a muzzle, it is important to be able to pacify the dog and control it so that manifestations of aggression do not lead to tragedy. Even if the dog is trained, one cannot be completely confident in its restrained behavior while walking on the street among other people and dogs, because it is impossible to predict situations that can provoke the dog.

Tibetan Mastiff and Other Animals

He is tolerant of other animals if the animals grew up together, but he can be aggressive with strangers, for example, cats. They are able to get along well with other dogs, but it is not uncommon for individuals of the same sex to show aggression towards each other in the struggle for dominance. Therefore, if you plan to have two dogs so that they live in harmony with each other, it is better to choose individuals of the opposite sex.

In general, the Tibetan Mastiff is obedient and will unconditionally fulfill the command of the owner, but this requires a lot of time and patience, and most importantly, consistency, firmness in training. It is important to conduct learning in the form of games, without forcing anything. Otherwise, an independent Tibetan Mastiff will show stubbornness. Training should be started as early as possible because as the dog ages, attempts will be made to show leadership, the owner must have earned the respect and trust of the dog, be able to stop such attempts. Harsh and harsh treatment will never inspire respect and trust in a dog. The animal has a strong sense of self-esteem, it does not feel like a pet and perceives people as equals.

The early socialization of the pet is important, which should not stop throughout its life (especially in the first two years of life), which will help raise an obedient, adequate dog that does not show thoughtless aggression towards people who have stepped into the territory of the animal and the owner.

The animal is characterized by destructive behavior from boredom, restlessness, and anxiety. In a similar mood, the dog can gnaw objects, dig holes.