Few aquariums do without catfish. In most cases, they live in the bottom layers of the water, allowing you to “revive” the lower part of the aquarium. But their main value is that they act as real “orderlies” of the aquarium, eating up the remains of food leftover from other fish, and thereby helping to keep the aquarium clean. Toracatum is one of the most popular decorative catfish. In this article, we will look at the main features of the content of these tireless helpers.

Catfish thoracotomy (Megalechis thoracic) is a freshwater fish from the armored catfish family. After the first scientific description by the French scientist Achilles Valensinns in 1840, the fish was assigned to the genus Hoplosternum but has now been transferred to the genus Megalechis. The name of the genus can be translated from ancient Greek as “giant snake fish”. The almost cylindrical shape of the body of the thoracotomy and its considerable size (about 15 cm) is reflected here. You can often find such spelling of the name “tarakatum”. But still, the correct form is “toracatum” (from the species epithet “thoracata”, which can be translated as “shell”. 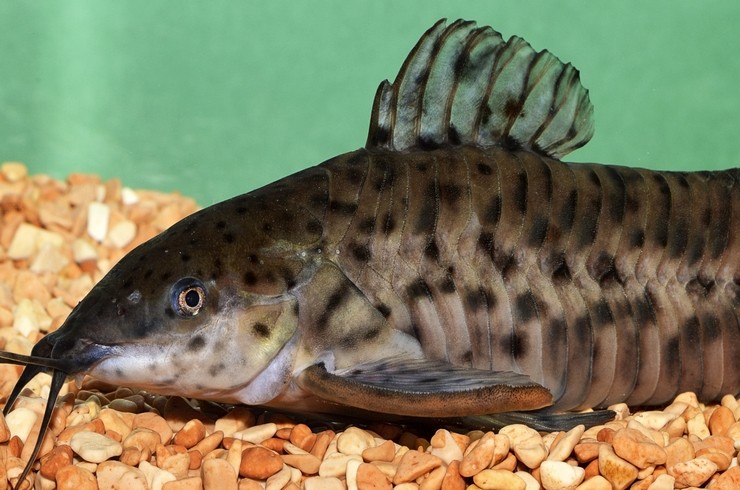 Like other armored catfish, the body of the fish is covered with several rows of bony plates. They are necessary for the thoracotomy to protect against enemies. Catfish are characterized by intestinal respiration: in conditions of a lack of oxygen, thoracotomy floats to the surface and take a “breath” of air above the surface of the water, which is then absorbed in a special section of the intestine.

Among the main attractive qualities are beautiful appearance, unpretentious content, and calm character. This fish can be recommended to both beginners and experienced amateurs.

The body of the thoracotomy is elongated, rolling. The side is covered with two rows of bone plates that converge in the middle of the body. The usual size of the fish is about 12 cm. The head is flattened, powerful. The mouth opening is directed downward. Near the mouth, there are 2 pairs of sensitive whiskers: the maxillary ones are directed downward, and the mandibular ones are directed forward. 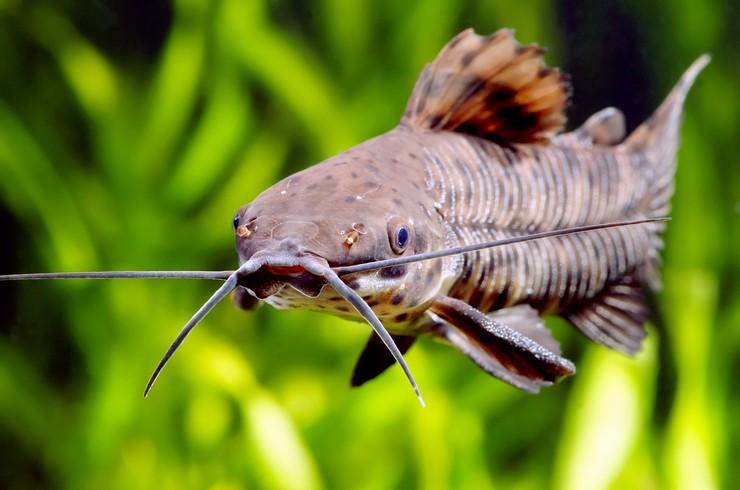 The dorsal fin is small, rounded. The pectoral fins are triangular in sexually mature males and oval in females and juveniles. A small adipose fin is distinguished. The tail is triangular, usually dark in color.

The main body color is brown. In young fish, it is lighter, in adult fish it darkens. Small dark spots of irregular shape are scattered all over the body. The abdomen is almost white. There is an albino form with a milky coloration and dark spots on the body.

Catfish thoracotomy is widespread in Central and South America. It can be found in the basins of the Amazon, Orinoco, Rio Negro, etc.

The biotope characteristic of the torakatum is a shallow freshwater stream or a backwater with a weak current, densely overgrown with vegetation. Thoracatum can survive a short drought by burying themselves in silt to a depth of 25 cm.

Torakatums are schooling fish, so they must be kept in groups of 3-6 individuals. It is desirable that at least 40 liters of the waterfall on one catfish. A cover is required.

Coarse sand and small rounded pebbles are suitable as soil. Fish lead a bottom life and constantly dig in the ground, looking for food. Be sure to provide an adequate amount of rock, natural driftwood, and grottoes. 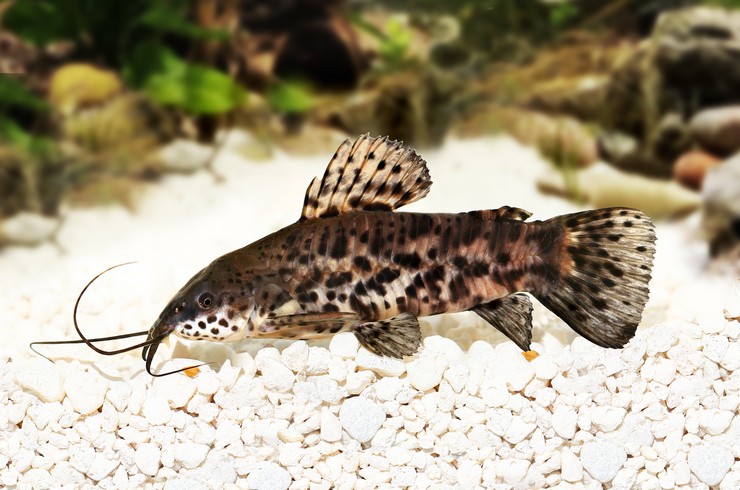 Of the plants, species with a powerful root system are best suited – cryptocorynes, anubias, etc. Torakatums are completely indifferent to greenery. But given their love of constantly digging up soil, loosely anchored plants will constantly float up. It is useful to plant floating species (Riccia, Pistia, etc.) on the surface of the water to dim the lighting. 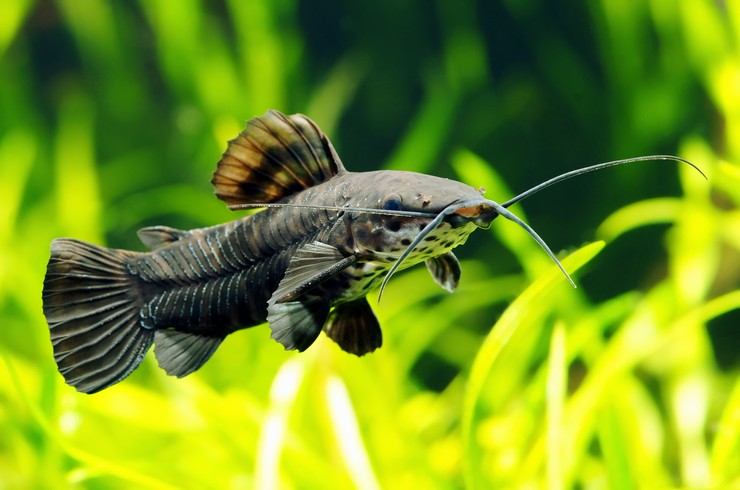 The aquarium must be equipped with a productive filter and compressor because the fish love clean and oxygenated water. Be sure to provide that the fish have constant access to the surface of the water because even in a well-aerated aquarium, thoracotomy will periodically float up for a “breath” of atmospheric air. Aquarium lighting should be moderate. Once a week, you need to change 20% of the water to prevent the accumulation of harmful nitrogenous compounds.

Toracatums are peaceful catfish that get along well with the vast majority of ornamental aquarium fish. In its natural habitat, the fish prefers twilight, but in an aquarium, it is active at any time of the day.

Conflicts with neighbors can only appear if the conditions of detention are violated. If the volume of the aquarium is too small, then the adults can pursue representatives of small species. During spawning, aggression increases to the point that the dominant male can kill the rest of the males. 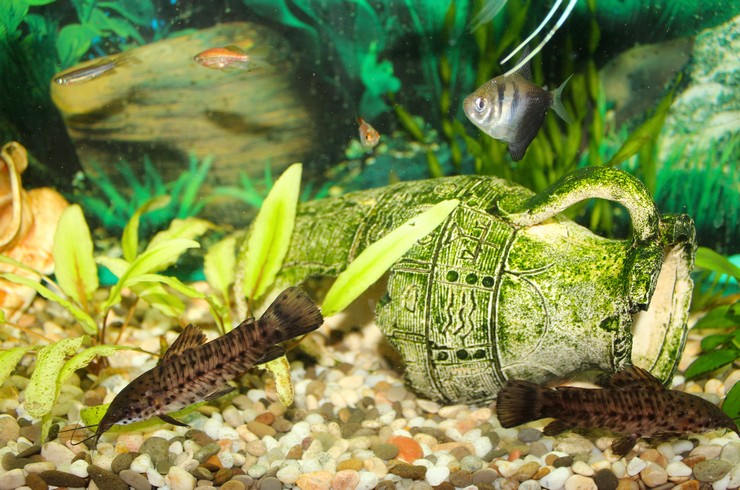 Good roommates for the thoracotomy will be scalars, barbs, tetras, iris, large live-bearers, small cichlids. It is not recommended to combine with other near-bottom species, for example, battles – conflicts over territory may arise. It is also not worth keeping a thoracotomy with large predatory species.

It is not recommended to use live or frozen food for feeding, as it is not balanced and may pose a threat of introducing infections into the aquarium. In aquarium living conditions, specialized high-quality dry food for bottom fish is best suited. They are in the form of tablets or wafers and immediately sink to the bottom, where they are eaten by catfish. Tetra Tablets TabiMin or Tetra Wafer Mix are excellent choices.

Do not forget that when kept in a common aquarium, catfish perfectly eat the remains of food that other fish did not have time to eat. Therefore, we recommend using Tetra Selection in shared aquariums – these are 4 types of food in one convenient jar: cereals, chips, pellets, and wafers.

And treats from the Tetra FreshDelica series will help to diversify the diet of your pets. These are food organisms (bloodworms, brine shrimp, etc.) in nutritive jelly. Your catfish will definitely like them.

Reproduction of thoracotomy is a fascinating process and does not happen like other catfish. To preserve eggs, the male builds a nest of bubbles, similar to the nests of labyrinth fish (cockerels, gourami, etc.). In suitable conditions, spawning can even take place in a common aquarium, but in this case, the cohabitants may suffer, because the males guard the nest very zealously.

It is best to organize a separate spawning aquarium with a volume of 60 liters or more with sandy soil and small plants. From the equipment, you will need a heater and a low-power filter. The male can be distinguished by the red-orange first ray of the pectoral fins. Females have a more rounded abdomen.

A pair of producers are planted in a spawning aquarium. To stimulate spawning, you must first lower the temperature by 1-5 ° C, and then slowly raise it to 25-27 ° C, make frequent changes with soft water (desirable KH = 2). The water level is set at about 15-20 cm. This is how we simulate the beginning of the rainy season when fish start spawning in nature.

If the conditions for spawning are suitable, the male begins to build a nest. To secure the nest, you need to place a wide leaf of an aquatic plant or a piece of foam plastic in the aquarium. Spawning usually occurs during the day, even before the construction is completed, after which the male collects eggs in the nest, drives the female away, and finishes his work. The female must be planted immediately so that the aggressive male does not score it.

The eggs of the torakatum are white-yellow, their number can reach 500-1000 pieces. Incubation lasts about two days, the hatched larvae are about 6 mm in size. They switch to independent swimming on the second day, hiding in dark shelters. After the appearance of the first larvae of the male, it is necessary to remove it from the spawning grounds, since there are cases of eating offspring by the father. Sometimes the nest with caviar is transferred to another aquarium using a saucer. In this case, antifungal drugs must be added to the water.

Fry grows rapidly (albeit unevenly) and within 2 months after hatching can reach a size of 2-4 cm. Sexual maturity occurs at 8-14 months.