Synodontis are one of the few fish that get along well with the popular African cichlids. These large and very beautiful catfish are also of African origin and will be a great addition to any cichlid.

Synodontis (Synodontis sp.) Is a genus of ray-finned fish from the family of Peristovy catfish. It currently includes more than 130 species that inhabit Central, East, and West Africa. Representatives of this genus first came to Europe in 1950.

The name of the genus can be translated as “fused teeth”, which indicates the peculiar structure of the jaws of these catfish – 45-65 teeth of the lower jaw grows together. 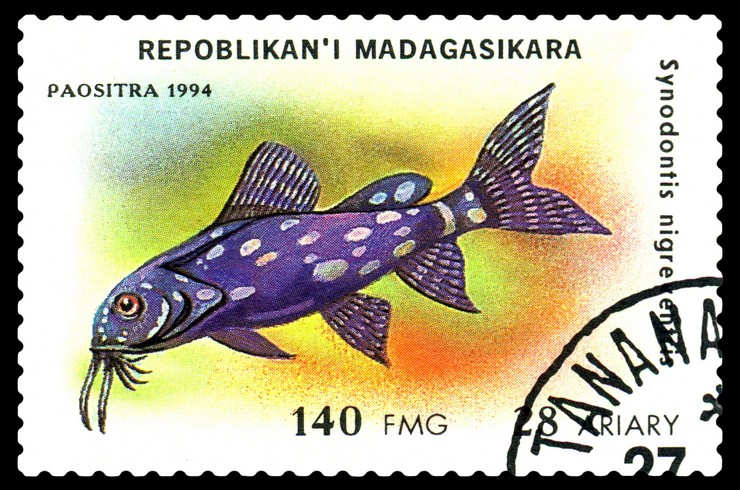 Synodontis are large representatives of catfish. Some species can grow up to 30 cm in length. Very often catfish can be found under the name “shifters”. The fish received a similar nickname for their interesting feature to swiftly swim or hang upside down, which is an adaptation for catching insects that have fallen to the surface of the water.

Like catfish, Platidoras are capable of making creaking sounds in case of fright, or when they are taken out of the water. They do this using the hard first rays of the pectoral fins.

Catfish are predominantly nocturnal, preferring to hide in shelters during the day. Fish are omnivorous. They are good helpers in maintaining the cleanliness of the aquarium, eating up the remains of food from other fish. In nature, they live in small flocks.

Despite a large number of species, cynodonts catfish have many similarities. The body is elongated, slightly flattened laterally. The arch of the back is much larger than the abdomen. The skin is firm with a lot of mucus. Depending on the species, the size of the catfish can vary from 6 to 30 cm.

The head is short, strongly flattened laterally. Large eyes are located on the sides of the head. The mouth is lower, wide, surrounded by three pairs of sensitive antennae. As a rule, the lower ones are feathery or fringed (a characteristic feature of the family). The antennae allow the fish to find food at dusk. The dorsal fin is triangular, and the caudal fin is two-lobed with long rays. There is a large adipose fin. 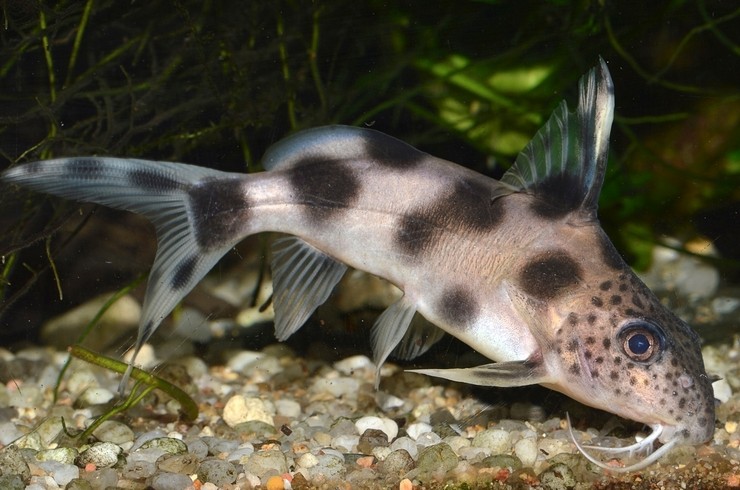 The dorsal fin has a triangular shape with 1-2 spines, the caudal fin is two-lobed. Also, the shape-shifting catfish is equipped with a large rounded adipose fin. The pectoral fins are well developed, elongated, allowing the fish to move quickly.

The main body color, depending on the species, can be light yellow, brown, gray-beige, etc. A characteristic feature is the presence of spots, specks, or stripes of different sizes and shapes on the body. The abdomen is pale, without spots.

Sexual dimorphism is weak. Females are larger than males.

Synodontis are widespread in tropical Africa. They are found both in river basins (Congo, Niger, Nile, Zambezi, etc.) and in lakes (Malawi, Tanganyika, Chad). Many are endemic to specific habitats.

Catfish live in various biotopes: floodplains, rivers with clear and muddy water. But most of the species prefer to stay near rocky embankments with sandy “meadows”. They love thickets of plants and driftwood, which are a natural refuge in the daytime.

The volume of the aquarium for keeping the cynodonts is selected depending on the specific species. For example, 60 liters will be enough for a shape-shifter, and an adult veil needs an aquarium of at least 150 liters. To prevent the fish from damaging their sensitive antennae, it is better to use sandy or small pebble soil. 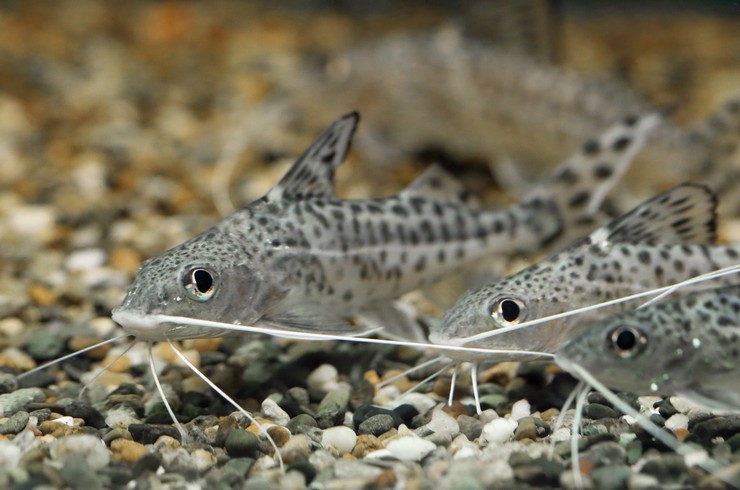 It is very important to provide a lot of shelters – there should be no less than the number of cynodonts in the aquarium where you can hide. Natural driftwood, grottoes, ceramic flower pots can act as shelters. Live plants will also be beneficial for many species, but given their natural tendency to dig, it is best to plant them in special pots. Anubias, Echinodorus, Cryptocorynes are well suited. 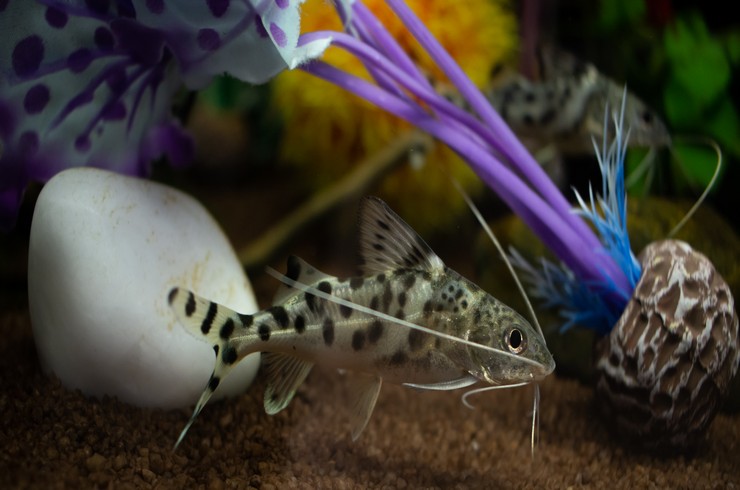 An aquarium needs a powerful filter and good aeration. Synodontis are crepuscular fish, so it is also better to make the lighting dim. The thermostat will not be superfluous, because these inhabitants of tropical Africa prefer warm water.

Water changes are required once a week – up to 20% of the aquarium volume.

Synodontis are quite peaceful fish, but this does not mean at all that they can be added to any small species. Like other large fish, the catfish will gladly eat anyone who fits in its mouth. Therefore, when kept in a common aquarium, they have completely excluded: tetras, neons, zebrafish, guppies.

Fish get along well with their relatives. However, skirmishes are possible here, so you need to take care of shelters. Very often, cynodonts react aggressively to other bottom fish – battles, corridors, ancistrus – it is also recommended to avoid such a neighborhood. 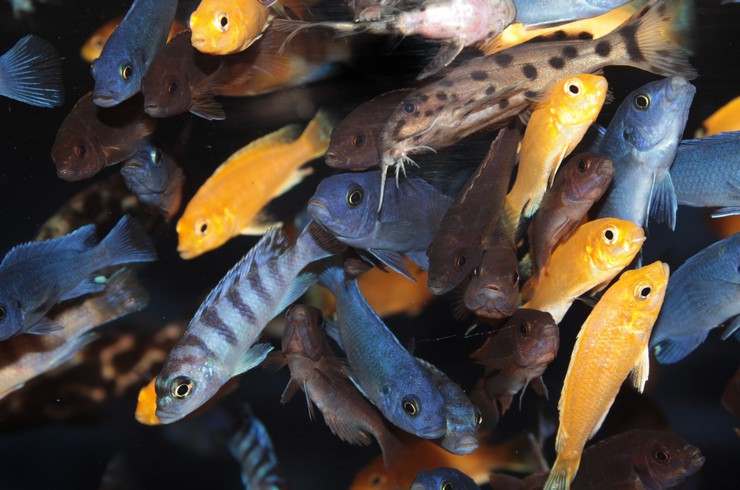 But with African cichlids, cynodonts will get along well. You can stop at aulonocars, haplochromines, melanochromis, etc. You can also settle synodontis with scalars, large gouras, rainbows.

Synodontis are unpretentious in nutrition and even in nature, they eat whatever they come across: insects, larvae, snails, fry of other fish, algae, plant debris.

Therefore, it is important that the diet contains not only animal products but also plant foods. It is not recommended to feed catfish live and frozen food that is not balanced and may pose a threat of introducing pathogenic bacteria and parasites.

High-quality dry food for bottom fish will be an excellent solution for feeding synodontis. They are made in the form of tablets, which quickly sink to the bottom and become available to the endodontists. Tetra Tablets TabiMin, Tetra Pleco Spirulina Wafers, Tetra Wafer Mix have proven themselves well. The inverted catfish also perfectly eats food floating on the surface – TetraMin flakes, TetraPro Algae chips. 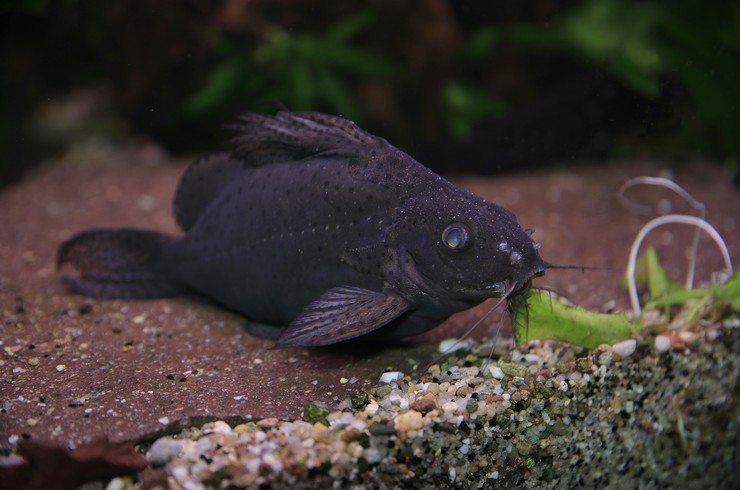 It is better to feed the fish once a day in the evening after turning off the lights in the aquarium. The fish have a good appetite, so make sure that the catfish do not overeat.