The four-legged friends are eager to explore and love to go for a walk in the forest when the weather is nice. However, many plants that are poisonous to dogs grow in gardens, parks, and forests. In the following, you will find out which plants pose a threat to your four-legged friend.

When exploring nature, dogs often come across poisonous plants. At first glance, a plant that is lethal to dogs is indistinguishable from a non-toxic plant. With the help of photos and the list below, you can identify poisonous plants for dogs faster. 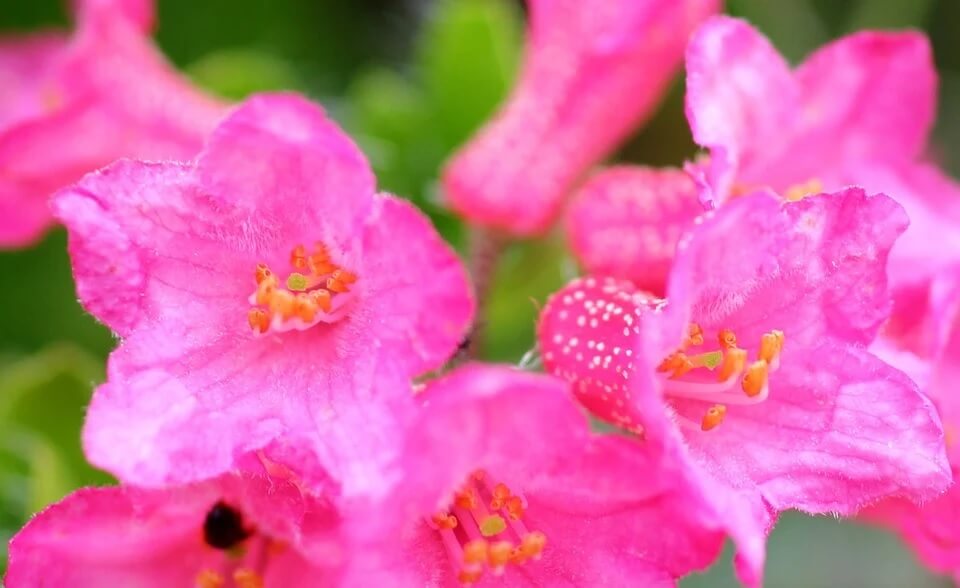 The leaves, roots, and flowers of the alpine rose, which blooms between May and August, are poisonous for dogs. As one of the plants that are poisonous for dogs, the alpine rose causes typical symptoms of poisoning: irritation of the mucous membrane in the throat and mouth, vomiting, stomach, and intestinal inflammation, cramps, and paralysis with possible cardiac arrest.

The blue monkshood, which grows in nature as an ornamental plant, is considered the most poisonous ornamental plant in Europe. Touching monkshood can even be dangerous for humans. That is why gardeners only touch it with gloves. The poisonous substance “alkaloid aconitine” easily penetrates the skin and causes numbness, vomiting, cramps as well as circulatory and cardiac arrhythmias.

In addition to the blue monkshood, the beautiful boxwood is also poisonous for dogs. The plant can be found in many places as a privacy fence or on hedges. The toxic constituent alkaloid cyclobuxin can be life-threatening for dogs. A four-legged friend that eats boxwood suffers from diarrhea, cramps, severe stomach and intestinal pain, and life-threatening respiratory paralysis.

Lily of the Valley

The delicate flowers of the lily of the valley look harmless at first glance. But the popular garden plants contain a number of toxins that are very dangerous for the furry friends who roam around. These include the convallatoxols and convallatoxin found in the leaves, flowers, and fruits. They cause dizziness, diarrhea, cramps, or even cardiac arrhythmias in the four-legged friend.

The oleander is another deadly garden plant whose glycoside oleandrin causes cramps, dilated pupils, or cardiac paralysis in dogs.

The popular garden and houseplant tulip can also be classified as deadly for dogs. After consuming the plant parts, dogs suffer from mild to moderate symptoms of poisoning. The most common consequences include abdominal cramps, breathing difficulties, or (mucous) skin irritation.

Poisonous Houseplants for Pets Such as Dogs and Cats

Indoor plants contribute to a homely atmosphere and a pleasant indoor climate. But many of the plant beauties are poisonous for the animals living in the household.

This includes, for example, the aloe vera. It causes severe digestive problems in dogs that nibble on the medicinal plant.

The blooming wonder rhododendron is also harmful to an overly curious four-legged friend. In the worst case, the poison Acetylandromedol leads to cardiovascular collapse, coma, or heart failure in dogs.

Ivy, which is often used for decorative purposes, should also be kept out of reach of the fur noses. Its poisonous saponins irritate the mucous membranes and cause vomiting, diarrhea, or an increased heart rate.

Recognize Symptoms of Poisoning in Dogs

A dog owner who keeps poisonous houseplants against their better judgment should know the typical symptoms of poisoning in dogs. The four-legged friend can ingest the poison in different ways. He either chews or gnaws the plant or swallows whole parts of the plant. The four-legged roommate is less likely to poison himself by inhaling the poison. A veterinarian should be consulted as soon as a dog exhibits any of the following behaviors.

Emergency Poisoning: First Aid Measures Before Going to the Vet

Ideally, dog owners should contact the vet immediately if they suspect poisoning in their four-legged friend. It is important to take a sample of the poisonous plant with you and to describe to the medical professional how much the dog ate. If it is not possible to see a doctor immediately, you must initiate life-saving first aid measures.

Charcoal Tablets Can Neutralize Some Toxins

Immediately after poisoning by a garden or houseplant, a charcoal tablet can neutralize the poison. It binds the toxic substance so that it does not get into the intestines. The faster the activated charcoal gets into the stomach of the four-legged friend, the more effective it is. For dog owners who have several four-legged friends in the house, an “emergency ration” for each dog is ready to hand. However, a charcoal tablet is by no means a substitute for a visit to the vet as soon as possible! In addition to the activated charcoal, the fur nose should drink water so that the poison is washed out. Milk and vegetable oils, on the other hand, aggravate the toxic processes. Furthermore, it is not desirable to make the dog vomit artificially. The veterinarian takes all other important medical measures.

Our Recommendation: Prevent Poisoning and Remove Poisonous Plants From the Household

Dog owners can take steps to prevent their four-legged friends from being poisoned. In general, it is recommended, especially for plant lovers with furry noses, to make a list of poisonous plants. Dog owners with a green thumb should avoid these the next time they visit the flower or garden market. You can also take the following measures to ensure that your dog does not eat any harmful plants.

Even as a puppy, teach your four-legged friend not to nibble on plants in the garden or on a walk. Furthermore, the dog should learn not to dig around in the garden. In general, you should not leave your four-legged friend unattended in the garden for a long period of time. Poisonous houseplants should be raised on shelves or window sills. Give your dog some meaningful activity. Puppies with chew toys in their mouths won’t think of eating a plant. Ideally, you should completely avoid poisonous plants in the garden and living rooms. Instead, you can put up plants that are not poisonous to dogs. Non-toxic plants for dogs include asters, bamboo, mustache, dahlias, golden florets, hibiscus, nasturtiums, lavender, marigolds, sage, or wild thyme.