It’s not particularly nice to watch dogs or puppies sniff and eat their own droppings or those of cats, chickens, or other animals. Coprophagia is the technical term for eating feces in dogs. The four-legged friends do not only endanger themselves but can also become a real source of infection for us humans. We’ll show you the possible causes of poop eating, the risk involved, and what you can do to stop it.

It is not necessarily normal behavior for dogs to eat feces. Your ancestors, the wolves, don’t do that. Experts believe that puppies eat feces to build their own intestinal flora. Due to volatile fatty acids, excretions are very attractive for many dogs. The cause can be very different. 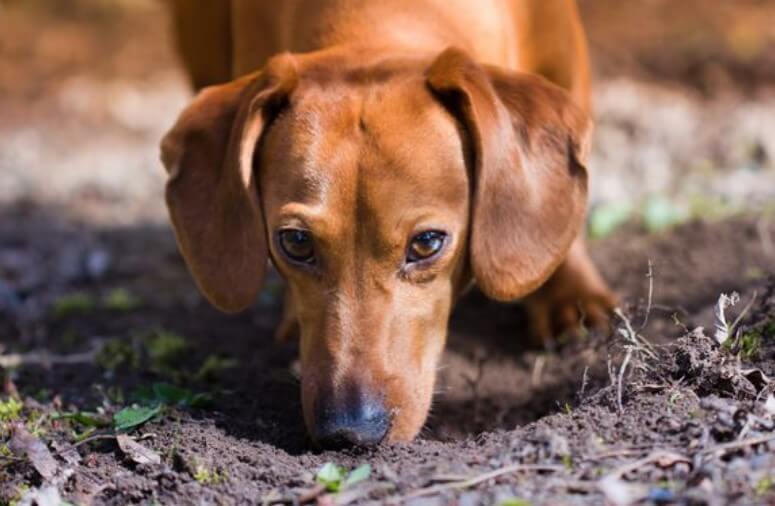 There are many reasons why dogs eat feces.

In the case of a dog that is neglected and only receives irregular food, it may be that it searches for food on its own. It may be that he tries to make up for a deficiency with feces. Once he gets used to it, he’ll have a hard time getting away from it.

Curiosity is primarily the reason for puppies. They discover the world and test a lot. This can include eating feces, carrion, rubbish, and many other things that actually have nothing to do with dog feeding.

If the pancreas is sick, dogs may no longer be able to use the nutrients in the food. Due to the underactive pancreas, they lose weight and try to get energy through food. It can happen that the sick dog ingests feces. High-performance dogs such as sled dogs and greyhounds also have this behavior in order to compensate for their high energy loss as quickly as possible.

Dogs can get frustrated when hygiene is poor, kennels are overcrowded, and human contact is poor. This can manifest itself through eating feces.

Feces and urine are territorial features. In dogs with extreme territorial behavior, it can happen that they want to remove markings of possible rivals by eating their feces from the territory.

Oftentimes, the dog gets a lot of attention, and when it’s in the form of ranting when eating feces. He can use the behavior when he feels neglected.

Giardia is a highly infectious, parasitic single-cell organism that is ingested by other dogs through infected diarrhea and soft feces. But you can also stay in puddles. Giardia can also be dangerous for humans. Dogs develop diarrhea that can only be treated with veterinary help. In general, dogs get giardia when their immune systems are not intact.

The dog can ingest worm eggs by sniffing. The parasites can be ingested by eating mice, small prey, carrion, feces, or raw meat if it is contaminated with worms. Mosquitoes and skin can also transmit some types of worms. This can be counteracted by regular deworming.

Swallowing the infectious worm larvae can lead to an infestation with roundworms such as Toxocara canis, which occur worldwide. In adult dogs, few worms usually cause no symptoms. In the event of a massive infestation, the dog can be harmed. Puppies are at risk from worm infestation and can become infected with roundworms even unborn in the womb. Roundworms cause a variety of damage, depending on the extent of the infestation and the larval stage of the roundworm. In the dog, there is an insufficient supply of important nutrients such as vitamins and other vital substances. This can have numerous consequences and affect all organs. Modern anti-worm remedies help effectively and easily against roundworms. With regular deworming, every three months, newly invaded worm larvae can be combated in good time. People can get severe toxocariasis from roundworms of the Toxocara family.

A small number of tapeworms are tolerated by hosts with adequate nutrition without the appearance of symptoms of the disease. A massive infestation leads to insufficient supply and digestive problems. There are many tapeworms such as the cucumber seed tapeworm and numerous members of the Taenia family found around the world. The small fox tapeworm, on the other hand, is restricted to Central Europe. Symptoms of severe worm infestation can include decreased performance, lethargy, susceptibility to disease, and dull, shaggy fur. It can lead to constipation and intestinal obstruction. If the mobile tapeworm segments leave the intestine, this can lead to severe itching in the anal area. Tapeworms can be removed easily and effectively using modern wormer products. As part of regular deworming every three months, newly swallowed worm eggs or larvae cannot even grow into full-grown worms. If a person becomes infected with the small fox tapeworm, life-threatening alveolar echinococcosis can occur. Taenia tapeworm infections show less severe symptoms.

Canine contagious hepatitis (Hcc) is a viral infection. The liver becomes chronically inflamed. The pathogen that occurs worldwide is transmitted from animal to animal through saliva, feces, or urine. Not only dogs but raccoons and skunks can also be vectors. The risk of infection is particularly high because the virus survives outside the host body for several months. Symptoms appear two to ten days after infection. Fever, vomiting, diarrhea, sore eyes that turn blue, and secretion that comes out of the nose. Depending on how the pathogen spreads in the body, vital organs can be damaged, so that the dog can even die. The disease is often fatal, especially in puppies.

Parvovirus is spread through the feces and can be fatal in puppies within a short period of time. Parvovirus is a highly infectious viral disease. Young dogs between the ages of 2 and 16 weeks and old dogs are, particularly at risk. The disease occurs with a fever. In addition, there is a lack of appetite and indifference. There is severe, often bloody diarrhea and a large decrease in white blood cells. The immune system of the diseased organism is reduced, which can lead to secondary bacterial infections. Large amounts of highly infectious pathogen material are excreted with the feces. Severe forms of the course lead to death within 24 to 48 hours. Determining the number of leukocytes is an essential diagnostic and prognostic criterion. With typical gradients, the values ​​drop by 500 to 3000 per microliter. The lower the value, the worse the prognosis for the dog. The viruses can usually also be detected in the feces using a rapid test (antigen ELISA). Pathogen detection is also possible using cell cultures or PCR. The direct detection of antibodies from the blood works in dogs without vaccination. The treatment primarily serves to stabilize the patient with infusions. An antibiotic will be given to prevent bacterial infections. The application of interferons and serum antibodies fights the virus itself. Strict hygiene measures must be observed so that the pathogens cannot spread further.

Dogs can transmit toxoplasma to humans immediately after ingesting cat feces through their snouts or fur. Toxoplasmosis is a disease that can affect humans and dogs alike. Dogs suffer a lot from the onset of the disease. Untreated toxoplasmosis can become chronic with severe meningitis. Symptoms include vomiting, cough, eye and heart problems, and jaundice. Diagnosis of toxoplasmosis is difficult and time-consuming. This requires blood analysis and neurological examinations. Antibiotics and a sulfonamide cure – the chronic form administered in the early stages – can be prevented.

Salmonella can be ingested from the feces of chickens or rodents. The dog can pass them on to humans via snout and fur, which rarely happens. Vomiting diarrhea with bloody excretions can be symptoms of salmonellosis. It can lead to fever, tissue drying, extreme weakness and fatigue. As a result, it can lead to intestinal inflammation. If left untreated, the disease can lead to the death of the dog. It does not have to break out in dogs with an intact immune system.

Measures When The Dog Eats Feces

In addition to training, there are a few things you can do to keep dogs from eating feces.