It is difficult to find a person who has never been stung by a bee in his life. Honey insect bites not only cause pain but also carry considerable danger: inflammation of the mucous membranes (if a bee has bitten, for example, on the eyelid), laryngeal edema (when bitten on the neck), allergic reactions. In short, there is little pleasant from the sting of a bee. What about our pets – dogs? After all, they, too, are often bitten by striped toilers-bees.

Animals can fall prey to bee sting through their own curiosity when they try to catch buzzing insects. And sometimes a fatal bite is a coincidence if the bee flew into the open window, and the dog simply ended up at the wrong time and in the wrong place.

Why a bee sting is dangerous for a dog

First, let’s figure out what happens when a stinging insect bites. If we are talking about bees, then they act like this: they dig into the body of a person or animal, leaving a sting in it, which has a poisonous sac and serrations. Therefore, the phrase “the dog was stung by a bee” rather than “bitten by a bee” sounds more correct, since bees cannot bite. But their other stinging “relatives” such as wasps, bumblebees, and hornets may well bite. By the way, the bee stings only once, after which it dies, leaving its sting weapon with part of the intestines in the body of an animal or human. The same wasps can sting multiple times, biting into the enemy again and again.

There are enough pictures on the Web that show dogs bitten by bees (or wasps). In the photo, animals with swollen noses or huge paws from edema look funny, but in fact, there is nothing funny here. A bee sting for a pet can turn into such troubles: 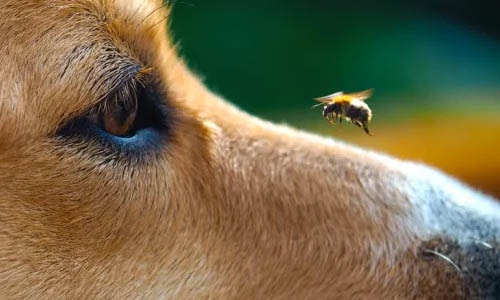 It is important to note that slight swelling at the site of the bite and a single squeal of the dog is not a problem. However, if the owner noticed at least some alarming symptoms (for example, signs of anaphylactic shock), you should immediately go to the veterinarian or call him at home as soon as possible. Otherwise, the animal may die!

How to help a dog bitten by a bee

If the dog has been stung by a bee, it is important to first determine the bite site to gently remove the sting with disinfected tweezers. Then you will have to carry out such saving measures:

We have now figured out what to do if the doggie is slightly affected by a bee sting. By the way, it will not be superfluous for any dog ​​owner to find out in advance from the veterinarian what remedies against bee (wasp, etc.) stings should be in the home medicine cabinet. The doctor will help you choose the right drugs, and also tell you how to calculate the exact dosage.

When calling your veterinarian as soon as possible

The owner of the dog should not self-medicate in such cases:

A seemingly harmless bee sting rarely turns into a disaster for dogs. And behind the funny-looking pictures, which depict dogs with swollen paws and noses, pain and danger are hidden.