Yulidochromis are an interesting group of cichlids from Lake Tanganyika. Their appearance is not striking, but the intricate interweaving of dark stripes and shiny spots, combined with the characteristic blue or white border of the fins, is mesmerizing. And they are also caring parents who remain faithful to each other all their lives. We invite you to learn more about the content of this interesting and unusual cichlid.

Julidochromis (Julidochromis sp.) Is a genus of tropical freshwater fish from the Tsikhlov family. Representatives are found only in the African lake Tanganyika. They have a body shape unusual for most cichlids and attractive striped color. Among the amazing forms of behavior, it is worth highlighting the monogamy of Julidochromis: the pairs that form are very strong and last for life.

At present, the genus includes only 6 species, but the number of color morphs, as well as natural and artificial hybrids, is much greater. Last but not least, Yulidochromis owes their popularity to their peaceful disposition: they can be kept with almost any medium-sized fish.

It is rather problematic to confuse Julidochromis with other cichlids, they have a peculiar body: elongated and almost cylindrical with a sharp head and a rounded tail. The dorsal fin in all Julidochromis is low, stretching almost across the entire back. 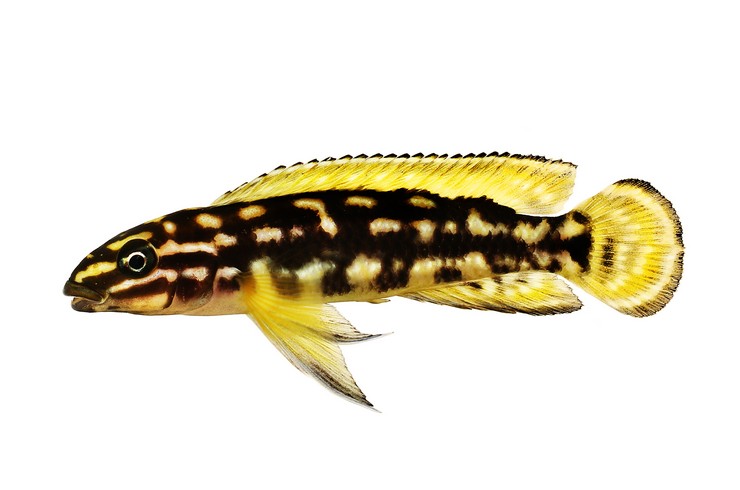 The size varies depending on the species and is 8-15 cm. The color of the fish is extremely diverse, which is due to the habitat, the ability of species to interbreed with each other, and the creation of artificial color variations. The main body color is usually white or yellowish with rows of dark stripes. Moreover, the stripes can be both vertical and horizontal. Unpaired fins often have luminous dots and a beautiful blue border. Sexual dimorphism is weak.

The natural range of the Julidochromis includes exclusively the second largest lake in Africa – Tanganyika, located in the basin of the large Congo River. Its ancient origin, size, and location have become excellent prerequisites for the emergence of a unique ichthyofauna. Despite the great depth (in some places up to 1.5 km), fish usually prefer to swim in the most favorable upper layer of the reservoir.

Julidochromis live in shallow waters with a sandy bottom and rocky coastline. 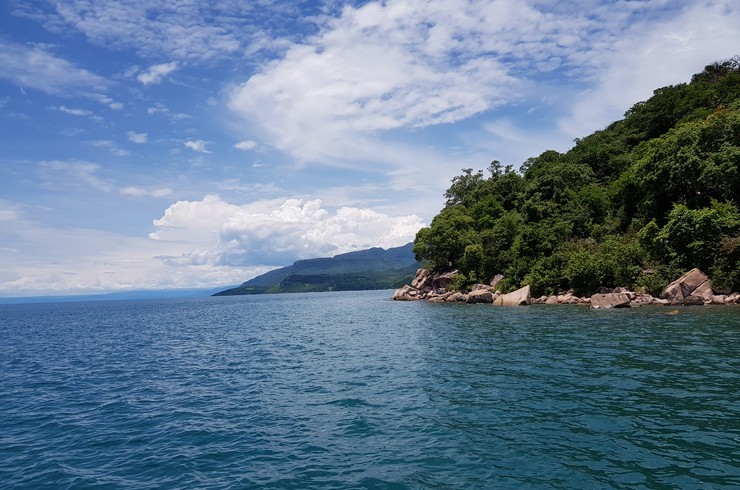 An aquarium of 100 liters or more is suitable for keeping a pair of Julidochromis. Young individuals are able to live in small groups, but later it is better to leave the formed pair since male cichlids are not tolerant of each other.

Setting up an aquarium will not cause serious difficulties. After all, fish look best in conditions close to their natural habitat. Therefore, sandy soil and piles of stones are used, from which grottoes, caves, and crevices are formed. Also, broken ceramic pots, coconut shells are used as shelters. Live plants are practically not used in aquariums with Julidochromis. 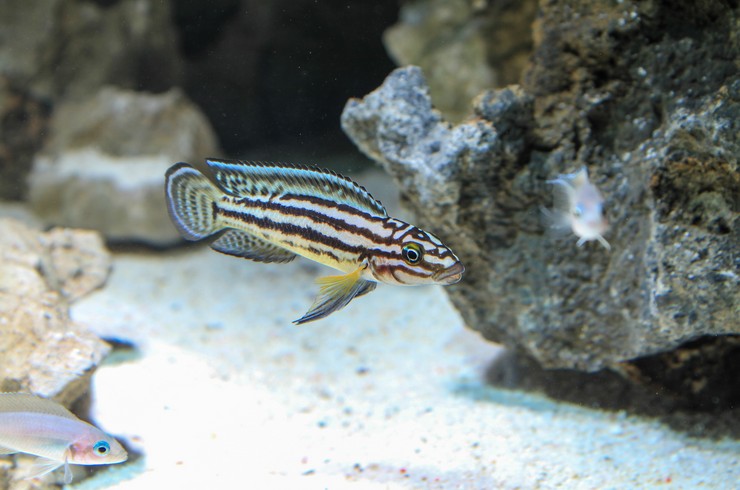 Stable water parameters in the aquarium are a guarantee of good health for Julidochromis. The filter must be powerful enough because it will bear the load on maintaining biological balance. You will also need a compressor to ensure high-quality aeration. Timely need to change the water in the aquarium: 20% of the volume once a week.

Yulidochromis are territorial fish. Having occupied a certain area in the aquarium, a pair of cichlids will actively protect it. But this aggression is directed only at relatives. Keeping julidochromis with other fish species is quite realistic, especially if they occupy the upper and middle layers of the aquarium. Tanganyika cichlids of similar nature are perfect as neighbors: lamprologus, princess of Burundi, etc. Fish get along well with calm Malawian cichlids, for example, the yellow cichlid.

If you plan to keep several types of cichlids in a common aquarium, do not forget to take care of a large number of shelters that will allow you to divide the “zones of influence”. 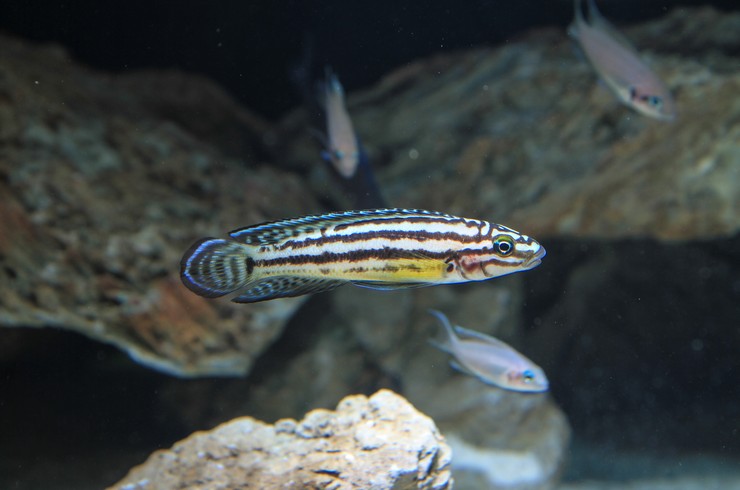 The natural diet of Julidochromis consists of various small invertebrates that live among algae, as well as the algal growths themselves. Such omnivorousness determines the conditions for choosing food when keeping fish at home. The menu of cichlids should include not only protein food, but also plant food, so feeding with unbalanced live or frozen food should be excluded. In addition, they can become a source of infection in the aquarium.

High-quality dry food for cichlids will be an excellent choice for feeding Julidochromis. It is better to choose food in the form of granules, which slowly sink to the bottom, where the fish prefer to stay.

Breeding Julidochromis is quite simple. The most difficult moment in this endeavor is the need for pairing. As noted above, the male and female are strongly attached to each other, so it will not work simply to bring two individuals of different sexes together. The male will certainly perceive the guest as an opponent and score. Therefore, they usually take a small group of juveniles and wait until they are paired. 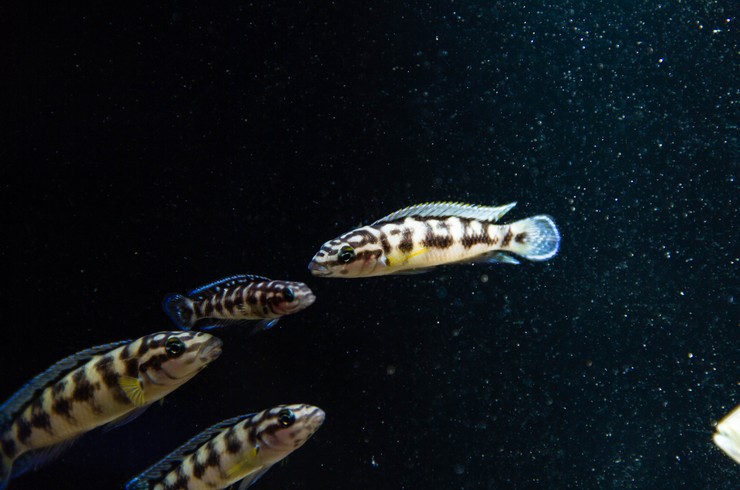 The courtship period in Julidochromis is invisible. The couple selects a suitable cave and lays eggs there. The fecundity of a female can be up to 100 eggs. Incubation lasts 2-3 days. Julidochromis have a highly developed parental instinct. Cichlids guard not only eggs but also fry until they reach a size of 2-2.5 cm.