American dog names are popular in this country. The advantages are simple: they sound modern and the variety of names is amazing. In this article, Pettime presents beautiful name ideas for males and females from America and reveals what they mean.

American dog names sound like freedom, the wild west, and adventure. The country, which is considered to be pretty dog-crazy, has a wonderful selection of diverse names. No matter if dachshund, mixed-breed dog, or a dog breed from the USA like

– an American dog name can be suitable for every fur nose. Find a suitable name for your four-legged friend (dog name male and dog name female) and find out what its meaning is. 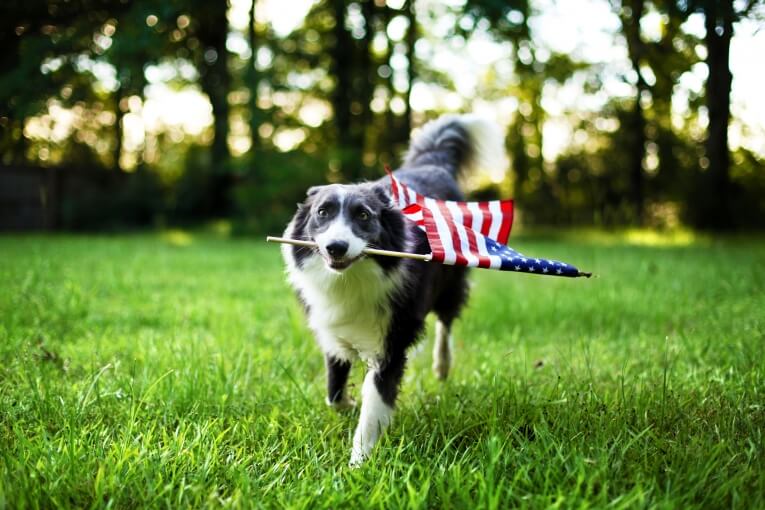 Bear is one of the most popular dog names for males in the United States. Particularly strong four-legged friends with brown furs, such as Newfoundland dogs, are ideal candidates for a name.

Short, concise, and with a nice sound: Chazz is an American name and means “free man”.

Like Bear, Cooper is in the top list of dog names for males in the USA. It is actually a common family name in the United States and means “cooper”.

Bring on the clichés: the donut is the favorite pastry of American police officers. At least that’s what the US cop series suggests. As a dog name, it sounds at least as cute as the round cake.

Abraham Lincoln was the 16th President of the United States. Nowadays, Lincoln is also a boy’s name and means “colony by the lake”. Baptizing a male with the name Lincoln is more American than ever!

Valuable: Nugget translates as “gold nuggets” and is reminiscent of the gold rush in California in the 19th century. As a male dog name, it sounds cheeky and funny.

Getting a place at the elite Stanford University is a dream for many young Americans. Clever and docile males rightly bear the name Stanford!

Named after a US boxing legend: This is the name that many think of the famous American boxer, Mike Tyson. It means “the son” and sounds like a courageous and strong four-legged friend.

How about a greeting in Hawaii, the 50th state in the USA? Aloha doesn’t just mean “hello”, it literally means “the presence of breathing” and has a beautiful, exotic sound.

The name of the US state Dakota goes back to an Indian tribe. More and more Americans are taking a liking to Dakota as a name for their children – it is also ideal for females.

This name is of Greek origin and means “farmworker” or “farmer”. But Georgia is also reminiscent of the southeastern state of the USA and makes a nice name for females.

Hailey is a popular name in the USA and has a beautiful sound. Suitable for bitches who like to run across meadows, the translation of the name is: “Heuwiese”.

Original: the name is reminiscent of the fourth-smallest US state, New Jersey, and is clearly suitable as a female dog name!

It was the legendary US animator who created the cartoon character Minnie Mouse. The American dog name goes especially well with small breeds of dogs.

Refreshingly different: American lemonade is also the bearer of the name of some females in this country. No wonder, because Pepsi sounds cheeky and lovable at the same time!