Most mini-dogs were bred at royal courts, and the Cavalier King Charles Spaniel is no exception. Despite the innate hunting skill, the breed has always belonged to the category of decorative. Fans of miniature hunters compare their pets with American Spaniel puppies and are sure that these dogs are created for the true comfort of their owners. Note that the Cavalier King Charles Spaniels were officially recognized relatively recently, but their history of the breed dates back to ancient times. 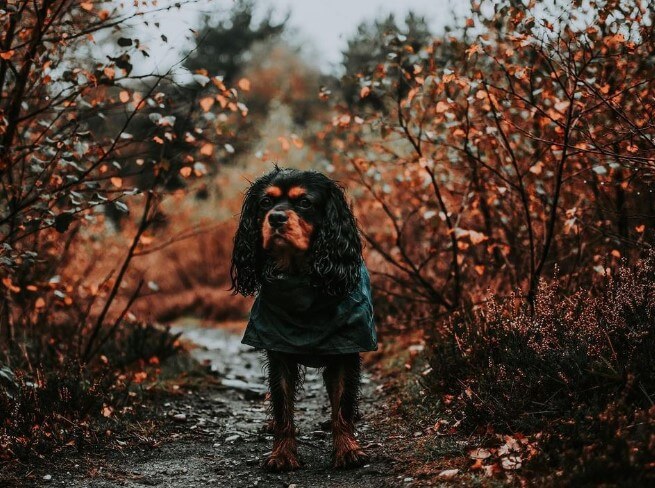 The exact origin of this little cheerful and dignified breed is not yet known. Various sources mention small beautiful dogs of white-black and white-red coloring back in the 9th century when the Celts brought them to the territory of Britain. But it is assumed that the homeland of Cavalier is Japan or China.

Already in the XIII century, this breed has become quite popular in the highest circles of society, especially in France and Britain. The ladies of the court fell in love with beautiful dogs for their grace and elegance; artists on their canvases often depicted King Charles together with his owners. But this beautiful breed enjoyed popularity not only because of its appearance. For their speed and agility, the aristocrats took them with them on the hunt, where they showed a high level of their skills.

It is interesting! Cavalier King Charles Spaniels still have a “royal reputation” today. You can be convinced of this by the numerous photos of “toy dogs” that have become favorites of celebrities. Famous fans of the breed are the Reagan family, American singer Frank Sinatra, “Iron Lady” Margaret Thatcher, actress, and daughter of the famous singer Liv Tyler, heiress of British monarchs Princess Margaret, guitarist of The Rolling Stones Keith Richards. 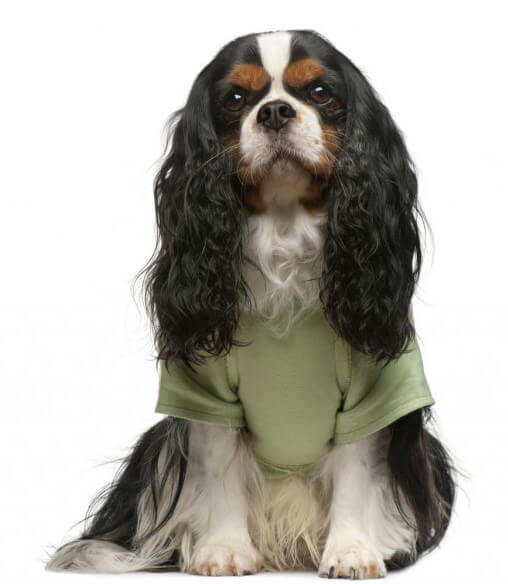 The modern breed of dogs, the Cavalier King Charles Spaniel, is an example of friendliness and loyalty. The shape of the head and the expression of the eyes make the dog especially adorable. The breed ideally matches its main functions – it accompanies the owner with pleasure, gives special comfort to the home, and constantly gives a good mood. Despite the toy appearance, the Cavalier King Charles Spaniel is a rather brave and determined dog that will not back down if something threatens its owner.

Males and females are visually distinct. Girls are more feminine, sophisticated, and slightly smaller than males. The main requirement for dimensions when assessing is harmony. Height and weight of an adult dog are not divided by gender: 30.5–33 cm; 6-8.2 kg.

The rich fur coat gives the Cavalier King Charles Spaniel a special charm. The coat is soft and silky. The guard hair is straight or wavy (not curly), dense, but light and elastic. Towards the end of puberty, the breed develops long, adorning hair on the ears, legs, and lower body. As in its early days, the modern standard recognizes four colors: 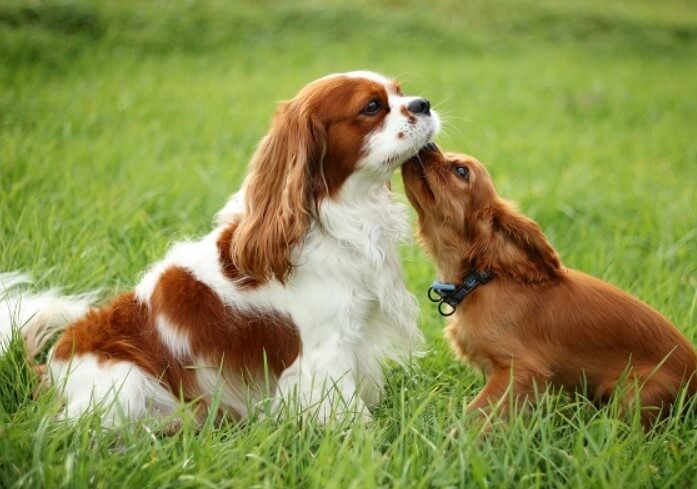 The breed was created and improved with the sole purpose of giving coziness, comfort, and status. The character of the Cavalier King Charles Spaniel corresponds to its name – dignified, cheerful, quiet, level-headed, docile, loyal, easily accepting changes. “Toy dogs” and aggression are incompatible concepts, although the appearance of such puppies from poor-quality mating is quite possible.

The Cavalier King Charles Spaniel loves to be held in his arms and generally loves affection. This breed cannot be categorically separated from your family and owner, and therefore accept the fact that if you buy this dog, you cannot leave it with friends during your vacation. You will have to take the animal with you. 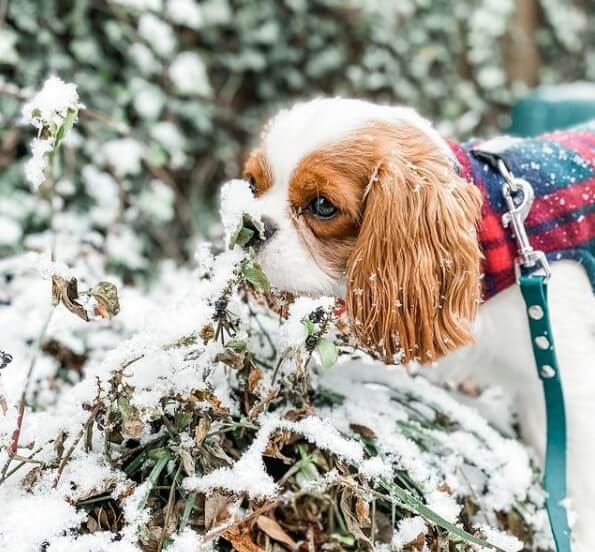 Daily care includes eye and ear examinations. The corners of the eyes are wiped with a damp sponge, the ears are cleaned in the presence of obvious plaque, but at least once every 2 weeks. To clean your ears, it is recommended to use specialized products that not only remove plaque but also disinfect the ear cavity. The nails are trimmed once every 2-3 weeks. Luxurious wool needs relatively easy maintenance:

The Cavalier King Charles Spaniel, like all small dogs, is quite difficult to tolerate the cold, so they need winter clothing. It is recommended to dress puppies in the fall. To facilitate care, in inclement weather, the dog is dressed in waterproof overall, if desired, shoes. The use of clothing for small dogs should not be considered a fad, as colds or skin problems caused by frequent bathing are direct consequences of not having the necessary accessories. 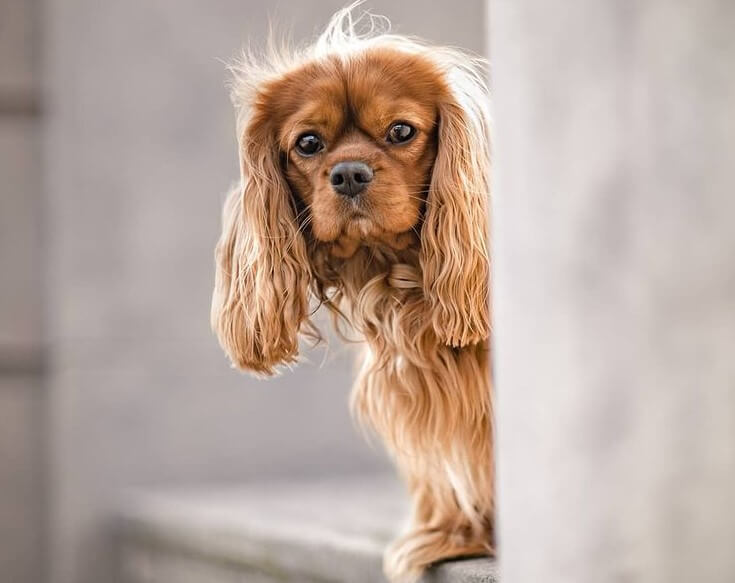 An equally important aspect of care is proper nutrition. As the experience of established owners shows, it is not so easy to feed the Cavalier King Charles Spaniel correctly. Many tetrapods have sensitive gastrointestinal tracts and are allergic to a number of foods. You may also hear that the breed is picky about food, but this is already a matter of habits and education. Nursery owners are leaning towards a diet based on quality dry or semi-moist feed. If the dog is allergic and tolerates natural food normally, the natural diet is acceptable. Please note that feeding “natural” involves the use of vitamin and mineral supplements. 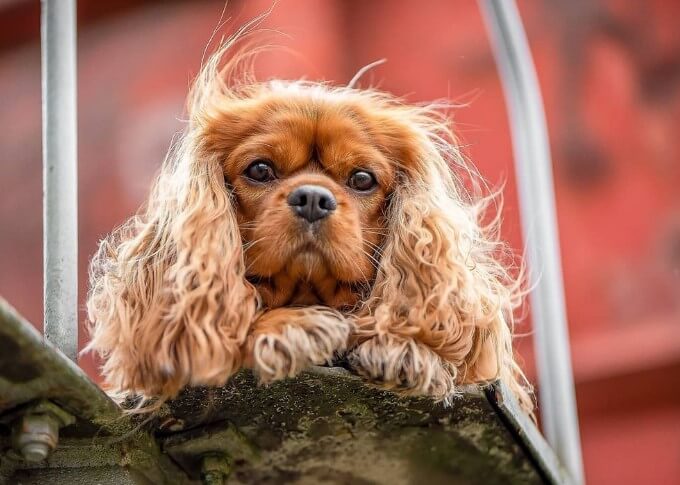 The life span of a Cavalier King Charles Spaniel ranges from 9 to 15 years. A fairly large range is due to genetics and quality of care. Unfortunately, the breed is prone to a number of diseases that can be both hereditary and acquired in nature: