German Shepherds are considered one of the most versatile dog breeds with original skills, abilities, and working qualities. That is why breeders often take the genetic code of these animals as the basis for creating a new breed. One of these subtypes is the Chinese German Shepherd. To create the type of the dog, the best carriers of exterior qualities and possessing a stable, calm character were carefully selected. 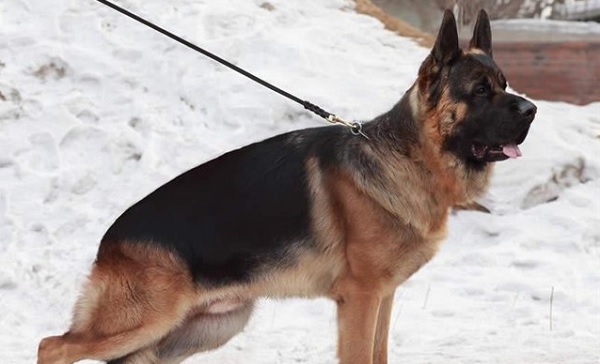 The Chinese phenotype of the “German” appeared quite recently. The fact is that in the 60s – 70s of the last century in China, dogs became a real luxury. They were recognized as a class symbol, which is why most breeds are on the verge of extinction.

However, in the last decade, the situation has changed for the better. Purebred German Shepherds were imported from Germany to Yunnan Province. Breeders from the Middle Kingdom are actively crossing “Germans” with Chinese molossi and wolf dogs.

The result is a fairly large representative of the breed, which has all the characteristic features of a real German shepherd. They are actively used in the army and in the police service and are also kept as pets.

There are 2 varieties of German Shepherds in China. They are polarly different in appearance, although a certain similarity is visible in them because the progenitors are all the same German shepherds.

In the PRC, two types of “Germans” are recognized:

Kunming (a light and nimble dog, perfectly showing its working qualities, has a light bone with a fairly high height at the withers, about 65 cm, the dog weighs about 35 – 37 kg, black-backed, zoned, and almost black pets are distinguished by color); 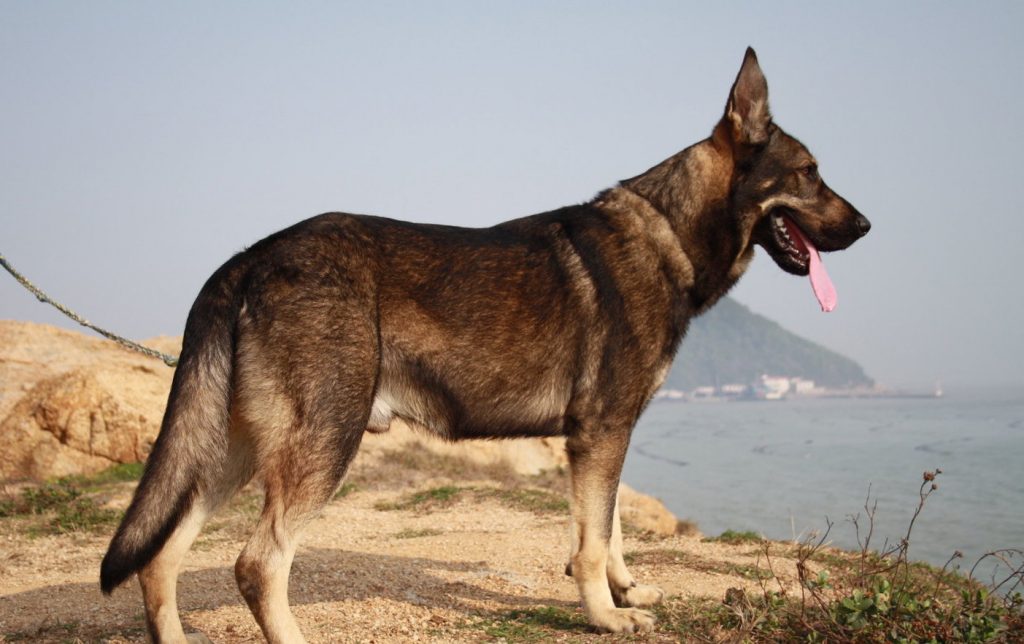 German Shepherd Dog of Chinese breeding (large animals with a massive head, their weight can reach 70 kg, there is a version that in their blood, in addition to the basis from German shepherds, there are impurities from the Tibetan Mastiff). 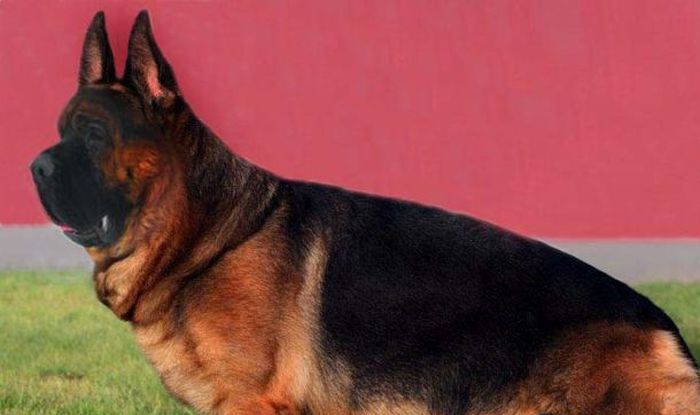 Important! The first variety shows itself perfectly in operational and rescue activities, the second variety is excellent guards, somewhat slow, but no less formidable.

In appearance, the Chinese shepherd breeding resembles a “German” crossed with a mastiff. It has a large head, a shorter muzzle with an open nose, a strong and wide chest, and stronger paws. The animal is slightly heavier than its purebred relatives, more sluggish. However, its large size and frightening appearance make it possible to effectively use it as a guard.

From the shepherd dogs, we are accustomed to, the dog has erect ears, in most cases a black-and-back shade of wool with a dense undercoat. The tail is saber-shaped, drooping down. The back and croup are wide, powerful, the angles are sharp and pronounced.

Sheepdog puppies bred in China differ little from purebred “German” babies. Almost all of them are born almost black and in the first month hardly differ in size and power from their relatives from Germany.

A little later, the babies acquire angular outlines of the muzzle, the head and body become powerful, the clear outlines of mastiffs, whose blood is mixed with this breed, become visible. The shade of the coat already by 2 – 3 months becomes black and brown and subsequently practically does not change.

It is noteworthy that, despite the clear external resemblance to the German Shepherd, individuals of Chinese breeding differ markedly from their relatives in temperament. These dogs have a rather tough disposition and are able to make independent decisions.

Important! Experts point out that such a difficult dog to educate is not suitable for beginners in dog breeding and people who are not going to train a pet.

Such a serious animal requires regular exercise, both physical and emotional. She must solve problems, move towards the goal and take long walks and runs. The owner should always be there to establish competent psychological contact with his own pet.

A competent approach to raising a puppy from the first days of his appearance in the house will help to raise a real service dog. They showed themselves excellently in the operational service, they are good watchmen and reliable defenders.

Cynology experts point out that harsh parenting methods are not suitable for the Chinese German Shepherd. You need to act confidently and firmly but without violence and harshness. You need to be a consistent, calm, and stubborn owner who purposefully goes to the chosen goal. Only in this way will the wayward dog understand who the real leader is in the house.

The ideal conditions for keeping a pet will be a spacious aviary with a warm booth or a closed adjoining area with the ability to hide in an equipped booth. Keeping in a spacious house or apartment is also suitable, but in this case, you will need to regularly walk the dog twice a day.

Important! You need to walk the dog at least 2 – 3 hours daily, and preferably more. Failure to do so may result in damage to the property of the owner of the animal.

Feeding is another important aspect of keeping a pet. Due to the large admixture of wild wolf blood, animals of this breed are not adapted to balanced dry food. It is better to use natural feeding with meat and protein products. Nutrition should be competent and balanced so that the pet receives all the necessary vitamins and minerals.

The Chinese German Shepherd is a separate breed recognized in the country in 1988. They differ markedly from their purebred relatives, but at the same time, they have a lot of similarities.