The German Shepherd is a medium-sized dog. The development of puppies takes a long time, despite the fact that by 5-6 months they look large and are practically not inferior in growth to an adult. The full development cycle of the puppy takes place only by the age of three. It is at this age that the animal usually ends its formation period.

Growth Stages of the German Shepherd 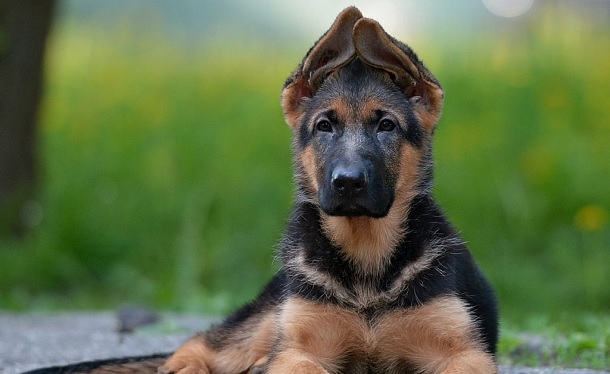 The shepherd dog grows in stages, sometimes the formation of the physical and psychological component is uneven, but in general, by the time it reaches the age of three, the dog must show its breed exterior and characteristic features of temperament.

In total, there are 5 stages of development of the German Shepherd:

intrauterine (the main stage occurring during the period of conception and pregnancy of the shepherd bitch, it is during this period that the main aspects of the nervous system and the external characteristics of the dog are laid);

the suckling period (the period of active growth, lasts about 4 – 8 weeks of the puppy’s life, while the bitch feeds him with her mother’s milk, at this moment the health and growth of the puppy completely depends on the breeder);

childhood and adolescence (lasts from about one and a half to six months, this stage of intensive growth and gaining muscle mass, the baby not only changes outwardly but also receives a large amount of new knowledge, acquires an owner, and socializes in society);

a young shepherd dog (the period from 6 months to 1 year is considered the stage of formation from a cub of a shepherd dog into a young, strong dog, at this moment the skeleton completes its formation, and the dog begins to be heard, increasing muscle mass, the animal is almost completely as an adult);

the formation of an adult pet (the physical development of a shepherd dog ends in the first year of life, but there are still many psychological changes ahead, it all depends on the individual characteristics of the dog, for some, the final stage takes place by two years, and for some, it takes more time, they are fully formed only by the third year of life).

Important! Despite the presence of certain stages, each dog develops purely individually. It depends on a number of factors, including feeding, socialization, communication with the owner, and others.

Every shepherd dog needs special attention at every stage of its development, even during the pregnancy of the bitch. In the future, competent socialization and the establishment of psychological contact with the owner presuppose constant communication with the pet.

How Old Is a GSD Puppy?

A puppy is usually called a dog in its first year of life. This is due to the stages of growth that occur just in the first half of the pet’s life. It is during this period that an active rise in height at the withers occurs, as well as muscle growth.

In the future, after reaching the age of one year, the pet will continue to gain muscle mass, but this will happen much more slowly. In addition, in the first year, the dog grows almost to the size of an adult, and after that, it grows only a few centimeters.

Important! Early mating, both in males and bitches, can dramatically slow down the growth of the pet.

After the first estrus, the female shepherd slows down its development, and with early mating, not only changes in terms of physical development will occur, but also psychological difficulties. Such dogs become unbalanced and less restrained. Males also react poorly to mating at an early age, stopping their mental and physiological development at the level of a young dog.

When Does a German Shepherd Become an Adult?

They talk about an adult dog only when the pet reaches the age of three. Usually, it is by the age of three that the dog goes through all the stages of formation, receives sufficient education and training, socializes, and gains the necessary height and weight. For three years passed, the dog receives a formed exterior, which makes it clear how the dog corresponds to the standard description of the breed.

Many people mistakenly believe that bitches’ first heat indicates that they have become adults. In fact, this is completely wrong. Professional dog handlers note that it is possible to knit shepherd dogs only after the third heat. It is then that the bitch is ready to bear and accept offspring, performing all her maternal functions.

How Old is a German Shepherd Dog Considered Old?

From about 6 years old, the shepherd dog is considered age. You can learn about the old age of a pet by the teeth. Usually, they are already noticeably yellow, the tubercles on them are completely erased. In addition, some pets change color, becoming piebald.

Most people may think that the dog has turned gray, as the main color of the coat becomes lighter, frankly light spots appear over the entire surface of the body like a person has gray hair. In fact, the pigment simply leaves the wool, due to which it loses color saturation.

The German Shepherd is a companion and an excellent watchdog. The meaning of this dog’s life is in work, it cannot become just a lap dog. Active activities, training, and constant stress should be the key to health and prolong the life of the pet.