Among the huge variety of chain-mail catfish, perhaps the most unusual body shape is sturisoms – fish with a very long, thin tail stem and beautiful fins. It may seem that the maintenance of such catfish will be difficult, but in practice, these are quite unpretentious fish that perfectly adapt to various conditions of detention, the main thing is to maintain the purity of the water.

Sturisoma panamense is a freshwater fish from the Lorikariev (Kolchuzhny) catfish family with a very unusual appearance. The first scientific description of the species was made back in 1889 by the naturalist Eigenmann. The name of the genus can be translated as “fish with the body of a sturgeon” because the muzzle of a catfish is really very similar to that of a valuable commercial fish. 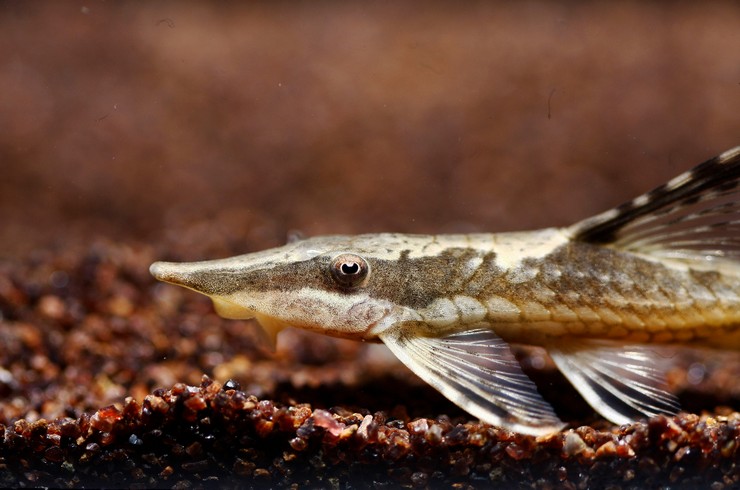 While sturisomes are not so widespread in hobbyist aquariums, an interesting body shape, reminiscent of a dragonfly in outline, as well as unpretentious maintenance and breeding, make the fish more and more popular.

Sturisoma is not only a beautiful but also a useful fish. She gladly eats the remains of food at the bottom of the aquarium, as well as algal fouling on the walls, decorations, plants, thus helping to maintain cleanliness.

Catfish are quite active, but, in general, they lead an evening lifestyle and stay near the bottom. At first, sturisomes “savages” were on sale, that is, those caught in nature, the adaptation of which is fraught with difficulties. Now the fish are bred on specialized fish farms and private breeders.

The body of the Panamanian stroma is low, flattened below. The caudal peduncle is very long and tapers towards the caudal fin, making it look like a dragonfly. The head is pointed. The mouth is modified into a suction cup, which allows the fish to stay in a strong current and scrape off algal growth.

The fins are large. The dorsal crescent is bent, the caudal is two-bladed with filiform ends. The extreme rays of the other fins are also elongated.

The basic body color can vary from dark to reddish yellow with dark spots. A wide brown stripe extends from the eyes to the tail, bifurcating at the dorsal fin. The abdomen is silvery-white and covered with yellow-brown spots. 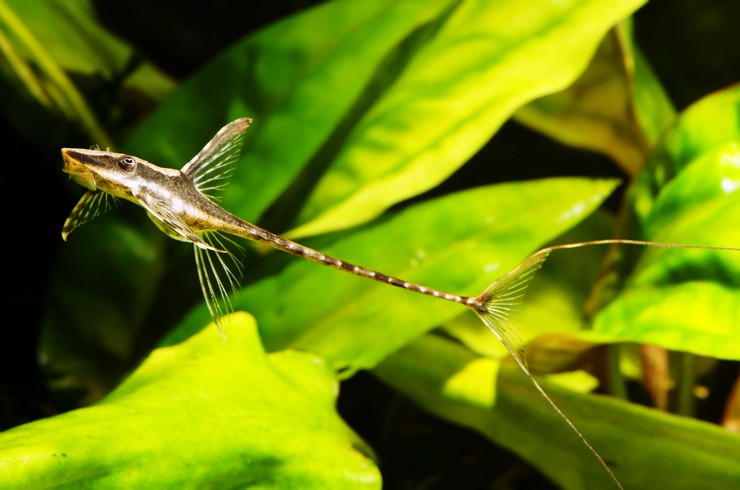 In a suitable volume, the fish can grow up to 20 cm in length. Sexual dimorphism is weak. Females have a paler color, their head is narrow, wedge-shaped. Before spawning, a strong arching of the front of the body can be seen in females. And in males, otodonts appear – dense bristles on the sides of the head. In young fish they do not exceed 1 mm, in adults, they reach 5-6 mm.

The natural habitat of the Panamanian stroma includes water bodies of Central and South America. The fish is found in countries such as Panama, Colombia, Ecuador, etc.

A typical biotope is deep, clear rivers with strong currents. Unlike their relatives, the Loricarii, who prefer sandy shallow waters, sturisoms tend to gravitate more towards hard rocky substrates.

For keeping studies, aquariums from 150 liters are recommended, because the fish are large, very active, and feel more comfortable when settling in small groups (3-5 individuals).

As for the soil, you can use medium-sized rounded pebbles. Be sure to place large flat rocks and natural driftwood in the aquarium. Firstly, sturisoms love to rest on such surfaces, and secondly, algae may appear on them, which will be eaten with pleasure by catfish, and finally, they can become a good substrate for spawning. Plants that are undemanding to light can be planted in the aquarium: anubias, mosses, etc. 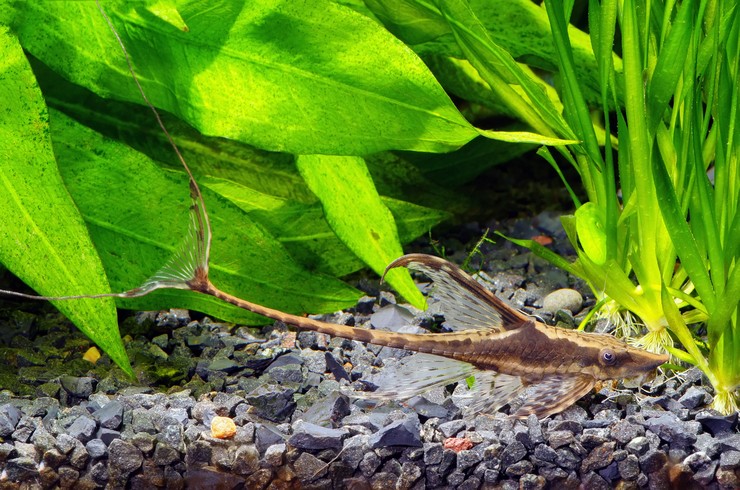 Sturisomas are very sensitive to water quality. You can only plant fish in a properly running aquarium with an established nitrogen cycle because a high concentration of nitrogenous compounds can lead to their rapid death. The water must be clean and saturated with oxygen, therefore it is imperative to install a filter and compressor of the appropriate capacity. As in nature, sturisomes love a strong current in the aquarium.

Remember to change up to 20% of your aquarium volume to maintain high water quality.

Despite its rather impressive size, the Panamanian stroma is peaceful. It practically does not conflict with congeners, only males can drive away neighbors while guarding the eggs. Catfish do not pay attention to small species in the general aquarium. Of course, a species aquarium with a school of fish would be an ideal solution for keeping stories, but if you wish, they can also be planted in a common aquarium for almost any fish: live-bearers, danios, barbs, tetras, rainbows. 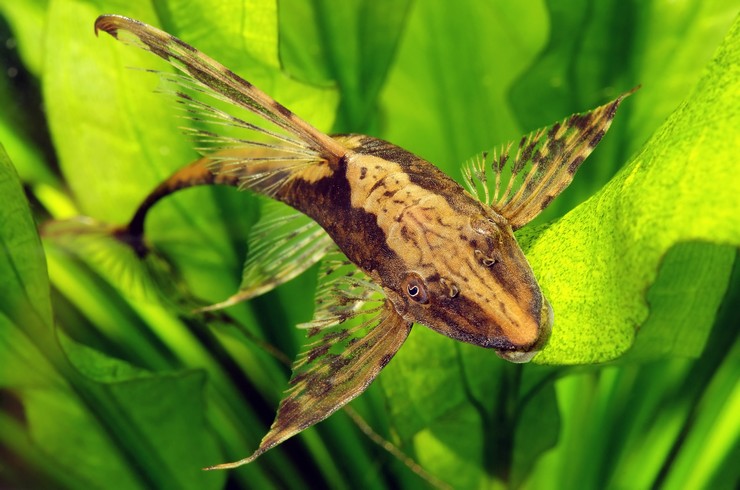 But keeping it with active predatory fish with stories is not worth it. Due to their timid nature, they can lose the competition for food and remain hungry.

Panamanian sturisoma is an active algae eater, more than 70% of its diet consists of plant foods. It will quickly eat up the algal growth that appears in the aquarium, thereby keeping it clean. But a good appetite can play a cruel joke on her. According to statistics, starvation is the main cause of fish death in an aquarium. Therefore, sturisomes need mandatory feeding with plant feed.

Often, aquarists use vegetables and herbs for feeding stories, but we must not forget that prolonged exposure to such products in water will lead to a deterioration in its quality. It is much better to focus on specialized tablets for bottom fish with a high plant content, for example, Tetra Pleco Tablets, Tetra Pleco Spirulina Wafers, Tetra Pleco Veggie Wafers. This is a completely balanced food that is designed with the needs of herbivorous fish in mind. They sink quickly to the bottom, which minimizes food competition with other fish. Thanks to this, targeted feeding of shy stores is possible. The tablets contain spirulina/zucchini – the components most suitable for herbivorous fish.

Breeding with sturis is not particularly difficult. Sexual maturity in fish occurs at the age of 18 months. An indirect sexual sign is the presence of dense bristles in males – odontodes. However, if the fish are not properly kept, sometimes the bristles may not develop. Also, females have a more elongated head when looking at the fish from above. The most reliable way to determine gender is the shape of the genital papule.

During the spawning period, males become aggressive and often attack females. However, these skirmishes do no harm to anyone. Reproduction can take place in both general and spawning aquariums. In the latter case, you will need an aquarium without soil, with a filter and a heater. The substrate for spawning is vertical surfaces: plastic tubes, driftwood, walls of the aquarium.

The place, which the male has chosen for spawning, is thoroughly cleaned by him, and only after that, the female is allowed to him. Spawning lasts from half an hour to several hours. The fecundity of a female can be 30-120 large light eggs.