Modern dachshunds are the descendants of dachshund-like dogs with long bodies and short legs, the images of which are first seen in the frescoes of Ancient Egypt more than 4000 years ago. Such dogs can be seen both in ancient Greek drawings and in Assyrian sculpture. During the excavations of the Roman Forum, skeletons of dachshund-like dogs were discovered. There is every reason to believe that dachshund dogs, and therefore dachshunds descended from the most ancient form of hunting dogs, hounds, or rather from their intermediate form of a short-legged dog, called a hunting reed. The modern classification classifies the Dachshund breed into a group of beagle dogs. 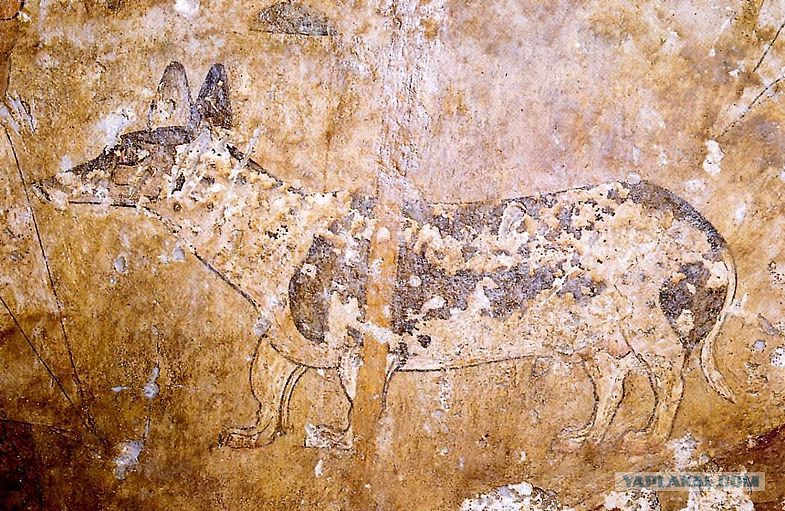 With the development of civilization, when spears and arrows were replaced by more advanced means of hunting, and even more so with the invention of firearms, the methods of hunting also changed. Hunters needed small-sized dogs capable of catching the animal not only on the surface of the earth but also underground in burrows. This is how the process of searching and creating various breeds of burrowing dogs began. In England, the function of underground hunting was performed by square-legged dogs called burrow terriers. In Germany, hunters used, on the contrary, squat, short-legged dogs with an elongated body, which allowed them to penetrate even very narrow burrows without hindrance. It is Germany that is the birthplace of the dachshund. Many skeletons of dogs of prototypes of modern dachshunds were found in Germany and belong to the period of the Roman invasion (II century BC). 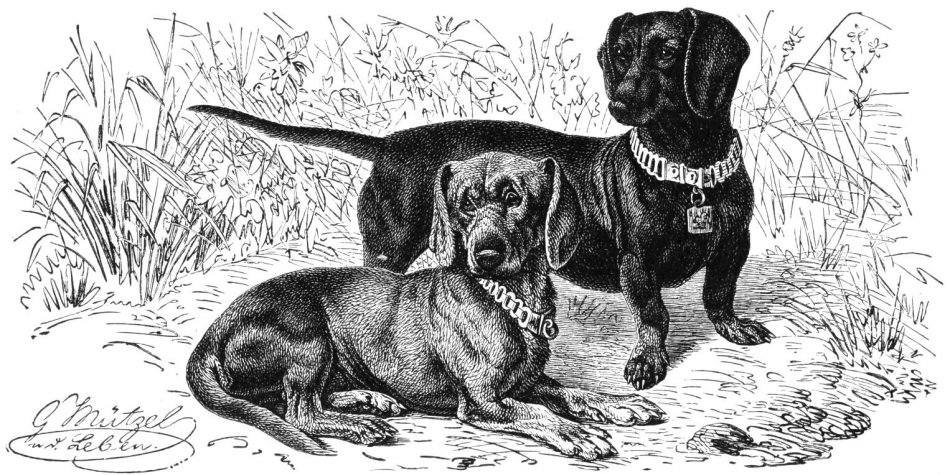 The origin and emergence of earthen dogs began in southern Germany. Documents dating back to the 7th century mention the “beaver dog”, which was used to hunt beavers, badgers, otters, etc. The ancestors of dachshunds probably include the dogs used in baiting hares and foxes. They are mentioned in the second half of the 13th century. In the 15th century, dogs were first described that bore some resemblance to modern dachshunds. The rapid spread of the breed dates back to the period of late feudalism (by the middle of the 16th century), when the rapid growth of cities began, and, consequently, a new class of townspeople, or burghers, appeared. It was they who made burrow hunting popular, and such a dog as a dachshund is convenient in keeping and training.

One of the first images of “earthen dogs” dates back to that time and is found in the book by Jacques du Folle “The Hunt” (1561). They probably were the progenitors of modern dachshunds, but the exterior was very different from those. Further development of the breed took place throughout the 17th century. In the hunting literature of that time, there are names: “earthen dog”, “badger dog”, “creeping dog”, etc. At the end of the century, the main variants of dachshund colors were laid down. It was noted that the dogs of the new breed are distinguished by excellent hunting qualities and extraordinary intelligence. By the middle of the 18th century, the Dachshund breed had basically developed. The Dachshund is gaining more and more popularity, and more and more people are breeding and improving the breed. 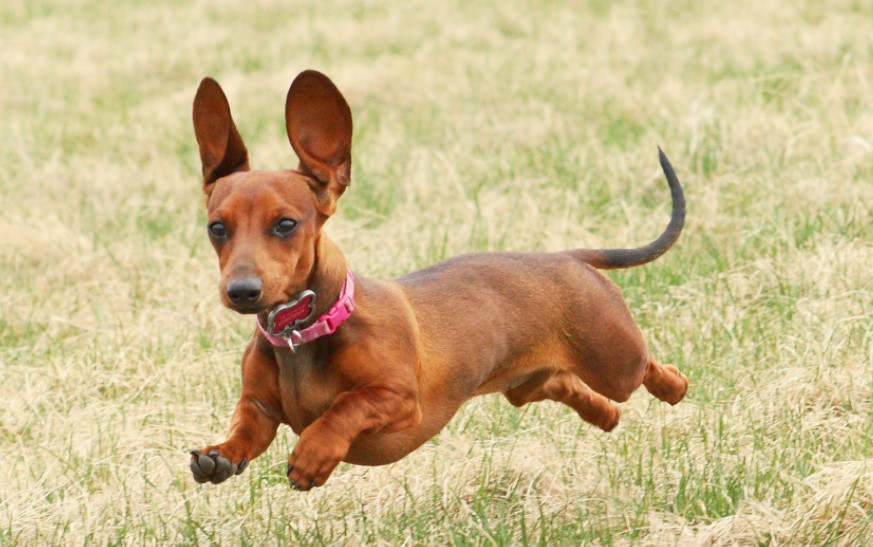 In 1880 the first German pedigree book of hunting dogs was approved. At the same time, a single breed standard was adopted. In 1888, the first German Teckel Club was founded in Berlin. The name of the dachshund is consonant with the German word der Dachs, which means badger, and it would be more correct to call the dachshund a Daksa or Dachsa. In northern Germany, the dachshund was called Teckel, and in the southern German regions, the name Dackel was adopted. The official name Dachshund in translation from German means “badger dog” and accurately indicates the purpose of the breed.

At the end of the 19th and the beginning of the 20th century, an attempt was made to breed varieties of dachshunds in size. In the 10s of our century, dwarf and smallest rabbit dachshunds are created. The emergence of different height and weight options was caused by the use of dachshunds in hunting practice. For example, the burrows of sandy soils are so small that ordinary dachshunds could not move in them at all. Therefore, the smallest individuals were specially selected and used for further breeding, which led to the appearance of dwarf dachshunds. When breeding the smallest variety of rabbit dachshunds, used to drive wild rabbits out of burrows, dachshunds were crossed with toy terriers and miniature pinschers.

The peak of the dachshund’s popularity came at the beginning of the 20th century, when a craze for this breed reigned throughout Europe, but already mainly as an indoor decorative one. The dachshund was a symbol of respectability and homeliness. In the 1920s, in Germany, German shepherds ranked first in terms of quantity and popularity, and dachshunds ranked second. Dachshund is a national breed in Germany. The German village of Gergweis is called the “capital of dachshunds”, because in every yard, and there are about 100 of them, these small hunting dogs have been bred for many decades. People from all over the world come here for puppies. The dachshund was also the symbol of the 1972 Munich Olympics. 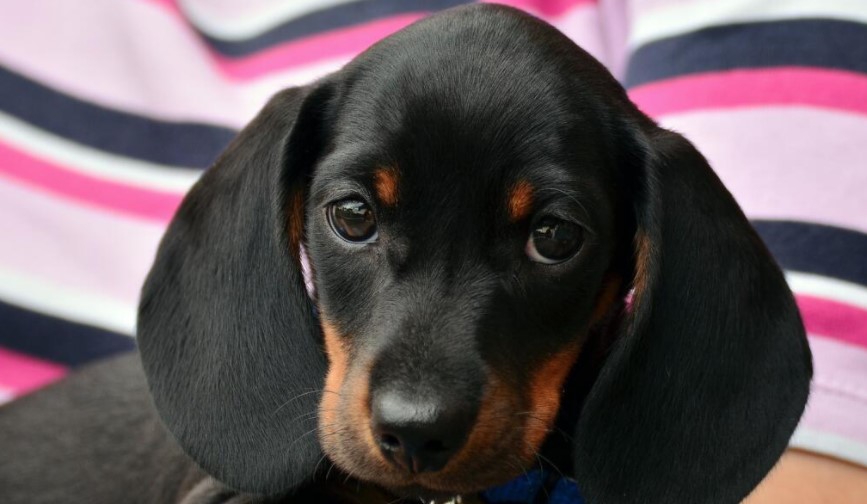 Bred in Germany, the Dachshund quickly spread throughout Western Europe in the 19th century. Dachshunds were very popular in Austria, Sweden, and England. Moreover, the English Kennel Club improved the breed and got its own type of dachshund, which is preferred in Australia. In the United States, the first taxes were registered between 1879 and 1885, and already in 1895, the Tax Club was founded as a branch of the American Kennel Club. In the United States, the dachshund is little used as a hunting dog. She is considered there mainly as a sports dog, however, her working qualities are also given due here.