Having decided to buy a playful, cute dachshund, you don’t have to worry too much about your pet’s health. Dachshunds are one of the strongest and healthiest dog breeds.

But this in no way means that you do not need to take care of the dog. Routine vaccinations, deworming, balanced nutrition, and moderate physical activity are essential for a long and fulfilling pet’s life. There are not so many specific diseases peculiar only to this breed, but you should be aware of them. 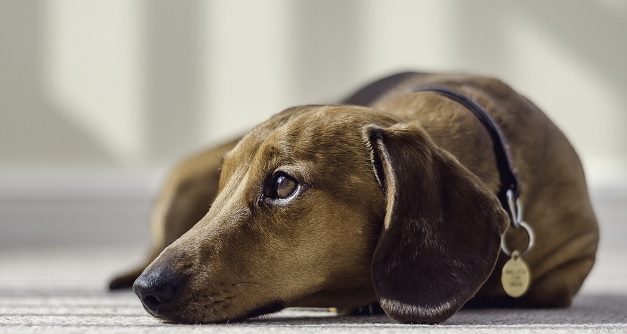 The most common and most severe hereditary disease of dachshunds is dysplasia of the intervertebral discs. The main danger is that the spinal cord is pinched and paralysis develops in the future. Dysplasia of intervertebral discs develops in adult animals by the age of five to seven years, occasionally earlier. The disease is associated with a load on the spine, because in dogs of this breed, an elongated body and under heavy loads, for example, with obesity, the spine suffers first of all.

It happens that monthly puppies, instead of fervently running after their mother, crawl on the floor, lying flat on their stomachs and making peculiar swimming movements. This is the so-called swimmer effect. But in most cases, after a while, the puppies stand on their feet and in the future, no deviations are observed. To prevent the effect of the swimmer, you need to ensure that the puppies do not overeat and do not move on slippery floors. In severe cases, puppies are unable to stand and are crippled.

Another hereditary disease of dachshunds is papillary-pigmentary dystrophy of the skin, in which there are changes in the secretion of the sebaceous glands, the skin is thickened, folds appear, and the pigmentation of the skin increases. It has been suggested that the disease is associated with a malfunction of the thyroid and adrenal glands. The disease is most pronounced on the abdomen, chest, inner surface of the ears and thighs, armpits. This disease is hereditary, is rare, with development it is not treated. You can only help the animal with local drugs.

Dogs of this breed have idiopathic epilepsy between the ages of 2 and 3 years. The disease differs from usual epilepsy, which practically does not occur in dachshunds. Dogs feel good after seizures. The attacks themselves last from two minutes to an hour. In this case, the dog’s coordination of movement is disturbed, there may be vomiting. In severe cases, urination, muscle tremors occur, the animal groans, lies down, and presses its paws under the stomach. Wire-haired dachshunds are more prone to idiopathic epilepsy.

Dachshund eye diseases include cataracts, retinal atrophy, optic nerve atrophy. In wire-haired, there is a pathology of eyelash growth – distichiasis or trichiasis. Eye diseases can be both hereditary and acquired.

When buying a dog, you should pay attention to its color. Marble dachshunds cannot be crossed with each other, because as a result, albinos are born, who may be deaf. Isabella dachshunds are prone to early hair loss, they go bald by the age of three in more than 90% of cases.

Almost all of the above diseases of dachshunds are hereditary, it is difficult, and sometimes impossible, to prevent them. But they are extremely rare, therefore, with proper care, caring attitude, dogs of this breed live for a long time, to the delight of their owners.